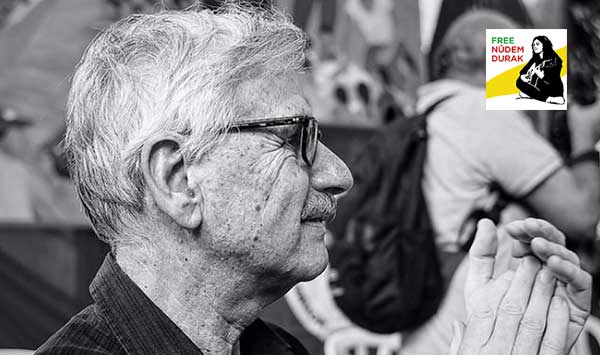 With this message, Brazilian ecosocialist philosopher Michael Löwy, a member of ATTAC and author of several books, joins the mobilization for the liberation of Kurdish singer Nûdem Durak.

FREEDOM FOR NÛDEM DURAK !
Freedom for the Kurdish nightingale!

Nûdem Durak is a young Kurdish singer.  Incarcerated in 2015, she was sentenced to 19 years in prison. Her crime? Singing in Kurdish. For Turkish authorities, for Erdogan’s fascistic regime, this is a dangerous act of subversion.   The Kurdish language, music, culture, art, poetry are always subversive, they represent a menace to the established order, a  challenge to existing authorities and a mark of disrespect for police decrees. To be punished severely. With 19 years in prison.

The Kurdish nightingale’s song comes from way back. As she says, it is a heritage from her ancestors, transmitted by her parents, and that she taught to other young people. Her songs belong to this tradition of the oppressed, a Kurdish tradition of several centuries, irrepressible, unsinkable, irreductible. To be punished severely. With long years in prison.

Her weapon, more dangerous than a kalashnikov: a guitar. With her guitar and her voice, she has sown seeds of resistance, seeds of dignity. She gave rise to dreams of freedom in her listeners. She brought a breath of poetry, a breath of fresh air from the plains and the mountains of Kurdistan. To be severely punished by shutting up in a cell.

For those who still believe in peace, in freedom and in human dignity,   Nûdem Durak’s imprisonment is an unbearable affront. This is why it is time for a cry of rebellion to rise a bit everywhere in the world, in Paris, in New York, in Rio, in Santiago Chili, in Berlin, with this imperative demand: