Coronavirus • Reportage in the streets of Diyarbakır 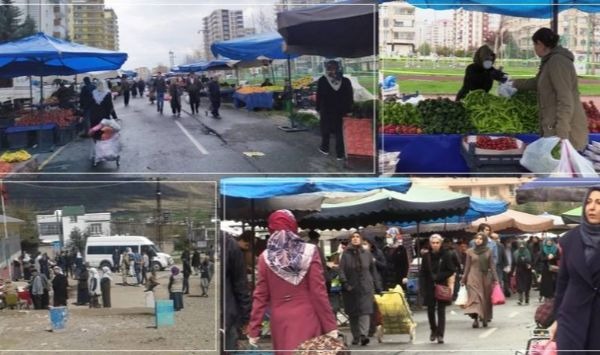 Şehriban Aslan and Zeynep Durgut, journalists with the Jin News Agency, walked through the streets of Diyarbakır under threat of the coronavirus.

The wealthy protect themselves, the poor work for them

We criss-crossed the streets of Diyarbakır, observing the problems people are facing and listening to their concerns. Diyarbakır residents reacted and underlined the fact no financial aid was available: “The wealthy protect themselves but the poor must work so the rich can earn money”.

First signalled in China as the outbreak of a new pandemic, the coronavirus (Covid-19) continues to spread across the world. Present in over 200 countries, the coronavirus was first spotted in Turkey on March 10. In one month, the number of cases in Turkey has climbed to 50 thousand and deaths are in the thousands. Among the measures taken, persons aged over 65 or under 20 years old were forbidden to go outside. Still as part of these measures, following a sudden decision by the Ministry of the Interior in the evening of April 10, a two-day curfew was ordered, covering the weekend in 30 cities and in Zonguldak where the disease affecting the lungs is highly prevalent.

In the streets of Diyarbakır where we walked before the prohibition, we observed the residents’ problems and listened to their concerns.

The usual crowds in the streets

In the streets we visited at noontime, we met women and children coming out of the post office. Many people, standing in lines without maintaining a protective distance, were risking their lives in order to obtain the very limited aid they will receive. Meanwhile, we also crossed paths with people wearing masks (obtained or home-made), -wrapping shawls over their nose or others wearing neither masks nor gloves. We moved toward the market in the Diclekent neighborhood, district of Kayapınar. While we expected to see less people in those streets, we were surprised to come across even more than usual.

Gloves and masks are removed and put on again many times!

When we reached the market, we noted that, although merchants at the stalls seemed to have taken some precautions, these were obviously faulty and insufficient. The people working behind the stalls wore masks and gloves but removed them and put them back on again a number of times. Thus, these protective items lost all usefulness.

“Our situation is easy to understand”

When we approached a greengrocer and asked him how he was faring, he said “as you can see, our situation is obvious. We are forced to work from morning till night, in the rain, the mud and the cold. We attempt to protect ourselves and the customers too. We must wear gloves and masks, but that is not possible, we must take them off and put them on again a number of times during the day. I don’t know to what extent this can be considered hygienic, but we try to be careful.”

“The State works for the wealthy”

We approached a woman shopper and asked her what she thought of the crowd in the market. “They tell us they have taken precautionary measures but we can see today that these precautions are useless in the market. As long as there will be no curfew, people will go on shopping and working. The wealthy protect themselves, but the poor must work, earning money for the rich. Today, I may also be a healthy carrier, all those who are here buying or selling may be also, but we don’t know that. In this country, the State works for the wealthy, but the situation of the poor is obvious” she said.

“Yet, the State should concern itself with us…”

During our exchanges an egg seller joined the conversation and asked: “Normally we should stay at home and the State should support us but, in this country, everything is done backwards. We are the ones who work and keep the State alive. I sell every day, in the market of a different neighborhoods. Every day, we encounter thousands of people. Go ahead and try to protect youself! The bills, the rent pile up, how are we supposed to pay them?”

“Everyone must see under what conditions we work”

We moved forward in the market and the merchants called to us: “Sisters, take our picture, show our situation so that everyone will see what plight is ours. They tell us to stay at home. If we stay at home, who will feed our children, who will pay our bills, our rent? In this country, on the bank account of the poor, there is nothing but death.”

We noted the intensity with which these people were fearful of being unable to pay their rent, power, natural gas in the midst of this pandemic, and leave you to draw your own conclusions.