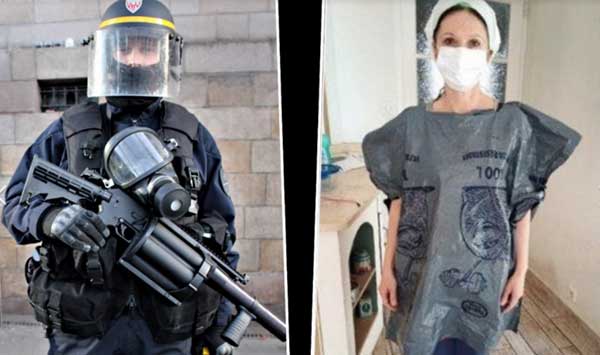 It is always a pleasure, in times of war or peace, to give the floor to our friend Carol Mann.

Researching the fate of women in war zones for over a quarter of a century has led me to reflect on the constant references to war by our politicians during this ongoing Covid 19 pandemic.

I asked Azra, my dear friend in Sarajevo to compare the situation with the siege she had experienced 25 years ago. She laughed: “Politicians talking about a war have no idea about what they are saying. Yes, being over 65 my husband and I are not permitted to leave our flat. So our daughter or the neighbours deliver food parcels to the door. But this time, we can communicate with our family all the time, we have enough food and especially we can have projects.That’s the difference”

While it is obvious that there is no actual armed conflict in this particular instance, is what is going on an actual war. In which case, who exactly is the identifiable enemy? Certainly not just this evanescent but vicious virus.

Martial rhetoric has been used by leaders all over the world as justification for extreme and often contradictory measures, erasing the differences between personal and public spaces, policed in a manner that would cause riots at any other time. In this particular instance, this resembles the “war of terror”, which has allowed authorities to intervene without warning against individuals and in their homes.

Carol Mann is a sociologist and specialist in the study of gender and armed conflict, and an associate researcher at L.E.G.S. Paris VIII.

She is also the founder of the association Women in War