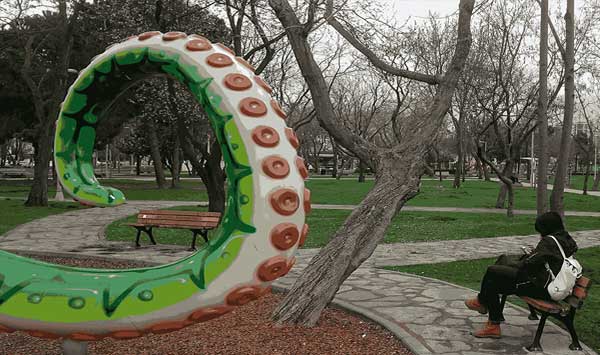 So there we are, all of us, stuck between our four walls, surrounded by this coronavirus. Some take it in their stride and wait it out as best they can, aware of the fact others are gritting their teeth, and others yet, especially in countries where people are condemned to surviving on a daily basis, are forced to go out in order to earn their keep.

If you look on this landscape dispassionately, the minority of those who in so-called normal times rest comfortably of the “exploitable” majority turned into service providers, simply carry on with their lives. Among them, some publish their “daily confinement” journal from the zone of comfort they built on the productive majority’s sweat.

The national appeal to donations launched by Erdoğan the day before yesterday, is nothing other than the “charitable hand” extended by this minority to those who sweat and die. Charity is a pejorative concept. Because it flows from the contempt of these few privileged ones for the majority on which they are accustomed to treading, thanks to the system set up in such a way that it performs like a steam roller, sucking out livelihoods in a tangible way.

Erdoğan, donating as a “gift” 7 months of his salary to this “national solidarity” campaign specifies that “the aim of this campaign is to provide supplementary aid to our fellow citizens with low revenues who are victimized in this period. We are expecting the greatest amount of aid from our businessmen, our charitable people.” Such an operation is, in itself the admission of the fact the country’s economy is not in the greatest of shape, and that the State’s coffers are empty, despite the warlike bellowings, claiming “the whole world envies Turkey”. Moreover, this campaign has no other objective than charity to assuage the consciences of those who usually do nothing but hoard. A kind of white bread handed out to the workers by the “society ladies”.

It is no wonder then that this campaign announced as one of “solidarity” is greeted with a strong epidermal reaction and is answered by responses grouped under the hashtag #zırnıkyok, “zilch nada”.

From its onset it was perceived like a showy invitation to a charity contest. Other politicians, nationalists, leaders, mayors and celebrities join the competition and exhibit their benevolence by staging their own donations. If, in response, thousands of people holler “zilch nada”, it isn’t because they don’t think we should help one another when faced by the coronavirus. The reaction is perfectly understandable, seeing the total lack of trust, and legitimately so, that has set in for years now toward a regime mired up to its neck in corruption.

As an English saying goes “Charity hides many sins.” The “zilch nada!” isn’t directed to the class experiencing difficulties but to those who administer the State. In the minds of many people, States, in principle, should be at the service of their populations. But we all know that they only care about their own permanence and serve the minorities at the top of the social pyramids. The Nation-State is not a benevolent and solidarity-minded administration.

Should we really be surprised by this popular disgust at this appeal to the rich to deign provide a bit of help to the poor? This repugnant charity, is it not based on the principle of obtaining the obedience of the lowly masses, of these hordes of human beings exploited to the marrow? There is talk of the most humble who have lost even minimal living conditions, the most basic of conditions. The golden minority, particularly the one that was born by enriching itself thanks to Erdoğan’s corrupt politicies, this new caste of bigotted upstarts, will “render” then the minimum to those set aside and openly despised. Jules Renard said “Charity is the hypocrisy which consists of giving ten cents of attention in order to receive twenty francs of gratitude.”

Calls to “stay at home” under the slogan “there is a life in the home” largely circulated by “celebrities”, illustrated with photos showing them with a book in their hand or practicing some sport in their luxurious living rooms had already set off a strong movement of indignation. “Do you think we go out for the sheer fun of it? We risk our lives facing the coronavirus because we have to in order to go to work. How else can we feed our families?”

Of course, Erdoğan is not the only one, and nor is Turkey, but let’s continue with his example… He has filled his own coffers to such an extent that even if he was to enter the show not with 7 salaries but with 77, those people in trouble could not come close to his grossly majestic standard of living. No, by filling the glasses at the top, the champagne does not fill the glasses at the base of the pyramid… Social networks then trot out First Lady Emine’s Hermès handbag, or yet again the gold-covered radiators of Minister and son-in-law Berat Albayrak, bought at prices higher than years of salaries for those who sweat. Or yet again, the luxurious official vehicles, bought with people’s taxes… The tax debts forgiven to destructive and mafia-like firms. “Let them pay! Zilch nada!”

Yet, there were solidarity campaigns launched by some Turkish mayors before Erdoğan’s appeal. Ankara is one of those large cities where Erdoğan’s AKP lost elections twice since the elections were annuled and repeated. Yesterday, the Prefecture blocked the bank accounts of their solidarity campaigns, considering that “the State is the sole power entitled to organize donation appeals.”

Despite all this, and parallel to it, there are people organizing humbly in the face of the coronavirus. They provide food to the most destitute around them, help the elderly who are confined under orders and under threat of fines. Associations are active. This happens in a modest way at the local level. In those instances, one can talk of solidarity and, you can even add the qualifier “national” if you like, for us, it is “human”.

Between the pitiful and contempt-ridden charity and solidarity there is a social divide dug by capitalism. Charity is the fruit of pride, it is nothing other than a means to maintain poverty, to deepen it and make it permanent, so as to keep people with their head barely above water.

There would certainly be no need nor surges of solidarity and certainly not of charity if “mutuality” existed in society. Will the trial by coronavirus help us become aware of this at long last?