İrfan Aktan • The women’s movement, the main opposition in Turkey 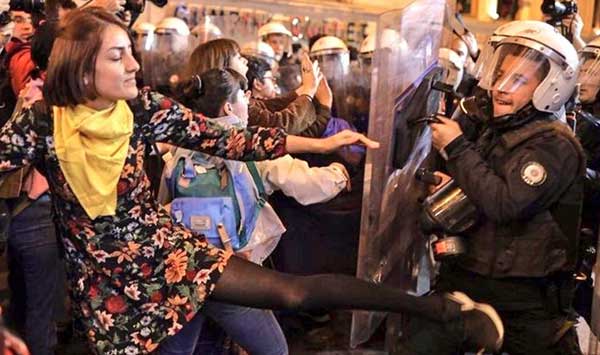 Even during the times when those in power impose the most severe fascistic orientation, there exists a unique opposition force of which it does not manage to destroy the legitimacy or to lock up inside the home: the feminist movement.

One of the great handicaps of the opposition in Turkey is the fact that its feeling of legitimacy and validity has deteriorated. Deconstructing the feeling of legitimacy has been the fundamental method of oppression for the AKP, one that has not changed since the beginning of its administration, including during the period when it was allied with the Gülen Brotherhood.

Justice, police forces and essentially those who create public opinion have been systematically used to this end, and this is ongoing.

This method has been applied with such success that, forget the true democratic opposition, even those who have left the AKP have begun in no time to note expressions of guilt in the own reflection in the mirror.

But even in those periods when those in power have champed at the bit and imposed the most severe aspects of fascism, there existed a unique opposition force in which it does not manage to dent the feeling of legitimacy and to lock inside the home: the feminist movement.

Women are not only subjected to the assaults of AKP’s power, they are under intense attack from men in general and are battling for their lives.

Drop the statistics: those who are massacred, wounded, physically and psychologically attacked, raped, exploited, are not numbers, each one is a human life.

Political power, the greatest champion of men and all the institutions under its control attempt, through their political practices as well as their words, to legitimize the anti-women bias and to criminalize feminists. Both in the street and in police stations, they exert intense pressure on women.

On March 8 2020 in Istanbul, “the violence corridor that leads to custody”.
In France, the way led to the steps in a subway…

In the media servicing power, mollahs use religion in order to have the younger generations adopt hostility toward women.

Discriminatory comments are slipped in snidely in schools, in school programs, at the mosque in the preachings.

In courtrooms, murderers of women obtain reduced sentences for a “good attitude”. Legal conquests tending toward equality between women and men are left in the closet, on paper, and even, there are attempts at erasing them by scratching them out.

Men who murder women know they could wear a total armor of impunity if the resistance and struggle of the women’s movement did not exist.

Women’s associations and institutions are besieged, attempts are made to “conquer” them from inside and from outside.

Actions and initiatives taken on March 8 give rise to innumerable heavy attacks.

Yet, despite all this attacks and attempts at subjection, the women’s movement in Turkey continues to be the principal opposition and the biggest barrier to the hegemony of political power.

If the AKP had managed to repress women’s opposition expressed by feminists, it would be facing a rose garden with no thorns. No, women are not “flowers” for those in power, they are thorns.

Certain elements provide fundamental breathing space for any opposition movement and are also indispensable for the feminists: validity and a sense of legitimacy. They know that ending their resistance or even a reconciliation would be the end of it all.

Those who put a padlock on their tongue because of intensive oppression, who hope to weather the storm without paying the price through a timid opposition and who, alleging conflicts can always be pushed over to the next day, those keeping a safe distance from an alliance would do well to look at the feminists, at the women’s movement.

The women’s movement that makes no ethnic or religious discrimination, does not transform political differences into obstacles to a common struggle, does not use the word “but” in their mutual support, never balks at any price to be paid, that struggles and seeks justice with extraordinary resistance for each and every woman massacred without feeling the need to set their togetherness under a common flag, a single Party or behind a single leader, thus showing the general opposition not only what must be done, but how to do it.

Moreover, this opposition does not only establish links in the street, only on social media, only in meeting halls, but it weaves them into each aspect of daily life.

The price to pay for the absence of an opposition that would not expect a pardon, that would not seek a consensus, who would not transfer expectations to “singing tomorrows” but would demand the present without fear of holding the gaze of the most severe power, that price is before us in an obvious way.

The women’s movement’s awareness of the fact it is struggling for life itself keeps it strong in its conviction, stronger and taller still in facing oppression. Consequently, this experience speaks volumes for any opposition.

The feminists will explain it much better, certainly, but seen from the outside, one can also state that one of resources of this strength is the awareness of the fact that this fight “for others” is also a fight “for one’s self”. On can note that this is one of the most important elements lacking in opponents other than the feminists.

So, opposition in Turkey, although it stands apart from the authorities in power remains quiet at each wave of oppression, and desperately attempts to show its innocence rather than its validity, has many things to learn from the women’s movement, both its historical experiences and its current ones.

Illustration: This photographie was published by the media in the service of power in Turkey with the caption “This is what our police officers have to deal with. God help them.”

İrfan Aktan began in journalism in 2000 on Bianet. He has worked as a journalist, a correspondent or an editor for l’Express, BirGün, Nokta, Yeni Aktüel, Newsweek Türkiye, Birikim, Radikal, birdirbir.org, gazete.com. He was the Ankara representative for IMC-TV. He is the author of two books: “Nazê/Bir Göçüş Öyküsü” (Nazê/A tale of exodus ), “Zehir ve Panzehir: Kürt Sorunu” (Poison and antidote: The Kurdish Question). He presently writes for l’Express, Al Monitor, and Duvar.