HDP • “The Party has a steep slope to climb. So we said let’s give it a bit of a hand” 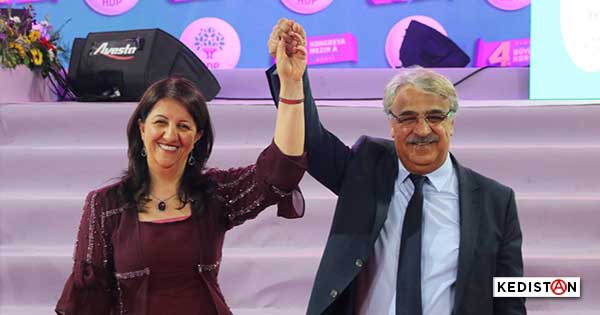 “The Par­ty has a steep slope to climb. So we said let’s give it a bit of a hand. We came all the way to Ankara. Let the Par­ty step on the accel­er­a­tor, we will push until it reach­es lev­el ground.”

Mustafa D. is a man in his six­ties. He head­ed out from Osmaniye and came (to Ankara) to par­tic­i­pate in the Con­gress of the HDP (Peo­ples’ Demo­c­ra­t­ic Par­ty). He pro­nounced those words in the midst of applause and slo­gans chant­ed by tens of thou­sands of oth­ers in the Con­gress Hall locat­ed just in front of the Ankara Sta­tion where 101 peace activists were mas­sa­cred in the ISIS attack on Octo­ber 10 2015. This is how he sum­ma­rized his posi­tion at the Par­ty’s side and, point­ing to the full breadth of the hall, he con­tin­ued: “Those you see here all came for the sake of their Par­ty. The steep­er the road tak­en by the State, the greater becomes the num­ber of those push­ing. We are not stub­born against the State, what we say is: the State should not be stub­born. Let peace return now, don’t be stub­born, hey, that’s enough!”

The HDP’s 3rd Con­gress was held in this same hall two years ago. Tens of thou­sands of peo­ple came from all parts of Turkey, and gath­ered here dur­ing one peri­od when heavy oppres­sion, cus­todies and arrests were already preva­lent. But this time, con­trary to the last one, police did not con­fis­cate pen­cils, the phone charg­ers, lip­sticks or head­phones at the entrance, and was con­tent with con­fis­cat­ing lighters. As a con­se­quence, con­trary to last time, it was eas­i­er to reach the hall after three rou­tine checks.

Of course, this did not mean that the State was allow­ing some slack. In police oper­a­tions begin­ning two weeks pri­or to the Con­gress, at least 200 mem­bers or sym­pa­thiz­ers of the HDP had already been placed in cus­tody. The last link in the cus­todies involved the 11 staff from the busi­ness respon­si­ble for the sound sys­tem in the hall, who had no affil­i­a­tion what­so­ev­er with the HDP…While I’m writ­ing this arti­cle, it is still not clear if they were arrest­ed for set­ting the vol­ume too high or too low…

The Con­gress hall was filled with peo­ple rejoic­ing at hav­ing avoid­ed a wave of cat­a­stro­phies. On the oth­er hand, every­one was sur­prised. So, indeed “The steep­er the road tak­en by the State, the greater becomes the num­ber of those pushing.”

Tru­ly, this Con­gress can be record­ed as the most attend­ed and the most enthu­si­as­tic offi­cial ini­tia­tive since the end of the “res­o­lu­tion process”. Most of the crowd was made up of those who had piled into bus­es on the pre­vi­ous day and had come from Kur­dis­tan, danc­ing the halay on the way, and had man­aged to make it through the var­i­ous check­points. As each group found fresh strength in the oth­er, the Con­gress hall exud­ed a sense of self-con­fi­dence, a deter­mi­na­tion we had not seen for a very long time.

Two years ago, every­one was ask­ing us jour­nal­ists “what is going to hap­pen?”. This time, no one asked, every­one expressed them­selve. The major­i­ty said “we shall win”, some said “if peace is achieved, it will mean that we have won.”

One can state that with this Con­gress, the HDP has not only renewed one of its co-Pres­i­dents but also replen­ished its own self-con­fi­dence. When some hun­dred politi­cians, par­lia­men­tar­i­ans, Par­ty rep­re­sen­ta­tives from Euro­pean coun­tries, Mid­dle-East­ern ones and oth­ers, were invit­ed up on stage, I was talk­ing with an old man who had come from Der­sim. “Look”, he repeat­ed between all his oth­er com­ments, “you see, as long as we stand tall, inter­na­tion­al sol­i­dar­i­ty grows”.

The HDP replaced one of its co-Pres­i­dents at this Con­gress. Sezai Temel­li has left, Mithat San­car has arrived. But it would seem that the change will not be lim­it­ed to a change of co-pres­i­den­cies. If San­car­’s speech is any indi­ca­tion, dur­ing this new peri­od, the HDP wish­es to change lan­guage, poli­cies and strategy.

In this speech, San­car was basi­cal­ly con­firm­ing the assess­ment made by Mustafa D. from Osmaniye: “When I saw the hall, a poem crossed my mind. Despite the dif­fi­cul­ties, the threats, thou­sands of peo­ple are gath­ered here. Mil­lions of oth­ers are present in spir­it. Those respon­si­ble for the per­se­cu­tions must be won­der­ing “how will we ever get rid of this Par­ty?” The answer is in the poem. “And the tor­tur­er rose from his bed one night/ My God he cried how com­plex this enigma!/ The more of them die, the more humans there are/ I have exhaust­ed myself/ in killing them.” (Ataol Behramoglu, “The Tor­tur­er”)

In insist­ing on the fact “we must estab­lish a new lan­guage”, San­car seemed to have begun weav­ing it already. He was clev­er­ly inte­grat­ing into his polit­i­cal dis­cours­es the post-con­fronta­tion res­o­lu­tions tak­ing into account the past con­fronta­tions on which he had worked as an academic

Will the sole dis­course of “a new lan­guage” be suf­fi­cient to push up over the steep incline? If the HDP is con­tent with a hand from his mem­ber­ship, with­out step­ping on the gas, can it avoid mov­ing backward?

The atmos­phere in the Con­gress hall showed that the base was deter­mined to push its Par­ty for­ward. Togeth­er we shall see if the HDP will con­tin­ue fight­ing against the inter­nal and exter­nal influ­ences hold­ing it back, or if it will step on the accelerator. 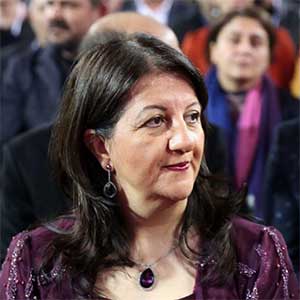 Pervin Buldan, born November 6 1967 in Hakkari, is a Turkish politician of Kurdish origin. From 2018 to 2020, she was co-President of the Peoples’ Democratic Party with Sezai Temelli. She was elected as deputy of Igdir as an independent candidate in 2007, then re-elected for the next mandates; she is the HDP’s deputy for Istanbul since 2018.
She is also one of the founding members and current President of Yakay-Der(en), a foundation set up in 2001 dedicated to the unresolved issues surrounding those who disappeared in the Kurdish conflict. Her own husband, Savas Buldan was kidnapped, tortured and then killed in 1994 by the Turkish services for his links with the Kurdistan Workers Party (PKK). In 2019, Pervin was the target of an inquest for “terrorist propaganda” for having denounced the invasion of the Kurdish regions in Syria by the Turkish army. 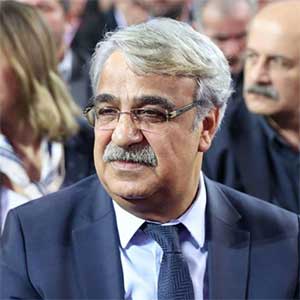 Mithat Sancar was born in 1963 in Nusaybin. He is a Turkish professor of public and constitutional law, a columnist and translator. Since the general elections in June 2015, he is an HDP member of the Turkish parliament. Mithat is one of the founding members of the Foundation for Human Rights based in Ankara (TIHV) and of the Institute for Human Rights (TIHAK). He entered politics at the request of Selahattin Demirtas, one of his former students. He was elected as deputy for Mardin in 2015 and re-elected in 2018. He is currently vice-president of the Great National Assembly. Sancar has been accused of insulting the President for declaring that the Turkish government was partly responsible for the terrorist attack against an HDP rallye in Ankara, and also for telling the authorities to avoid a conflict in Cizre. He was also accused of propaganda for the PKK because he had supported the opening of Kurdish schools.