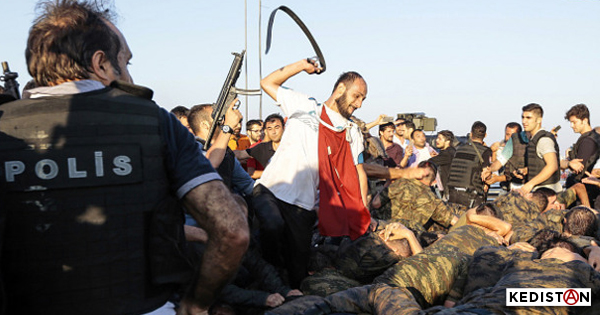 Concerning Turkey, there are words one is well advised to use as headers in every article, video, analysis or documentary: “following the 2016 coup…”. I will respect the rule and thus begin.

Following the 2016 coup in Turkey…

In principle, I should date the start of the State reperession occurring in Turkey and its procession of arrests, trials, incarcerations, destitutions… and more, to… July 2016.

Let’s look at a few recent “affairs” now settled or still before the courts through the lens of this recurring explanation.

For details, I refer you to the numerous articles provided by Kedistan on the topic. But let’s take a single example in this trial, that of d’Aslı Erdoğan, recently acquitted. Her case summarizes the entire indictment perfectly. It referred excplicitely to writings and events prior to 2016 and, under the label of “terrorism” attached to them, the reference was to the “Kurdish question”…

This example may appear inadequate since the newspaper, shut down since 2016 was always a “historical” press instrument for Kurdish expression.

The imprisonment of Kurdish deputies

The lifting of parliamentary immunity that allowed the arrest and imprisonment of a number of HDP deputies occurred in May 2016. A “disguised coup d’état“, wrote Kedistan. The failed coup occurred mid-July.

The Gezi trial and Osman Kavala

As its name indicates, the incriminating events go back to Gezi (2013). Osman Kavala was arrested in 2017 and accused of having called for and supported the “uprising”. The arrest came after the coup but was not linked to it thus far, even if a prosecutor now seems to have found a new accusation concerning purported links with the Brotherhood of preacher Fetullah Gülen, the better to re-imprison the one who had finally been freed.

In January 2016, the “Academics for Peace” signed an appeal that would lead them into a hell of repression under every guise. What was this peace they were calling for? The reference was explicitely to the 2015 massacres in Cizre, Nusaybin…exactions, states of siege and destructions, and to the attacks such as the one in Ankara on October 10 2015.

Undoubtedly, there was a bloodbath in July 2016. But the exactions, destructions and massacres against the Kurdish populations were committed wholesale in 2015-2016 and constitute so many war crimes, some of which could certainly be described in judicial terms as crimes against humanity. It is of public knowledge that the military commanders that ordered their perpetration were in a majority “involved” in the failed coup d’état of July 2016…

These are explicitely related to the failed coup d’état. Purges of academics, civil servants, military personnel and plain citizens. Regular arrests, trials, jailings or banishments. Decrees then followed but were then mixed into the great cauldron of the fight against the Gülen Brotherhood, accused of having incited and executed the attempted coup, mixing in opponents, including as many Kurds or friends of the Kurdish movement as true ex-friends of yesterday’s Gulenists.

I end my list of examples here and ask myself again about these words “following the 2016 coup.”

It becomes obvious that the facts raise more questions about the “nature of the coup d’état” than they establish the date of State repression or of the “drifting to authoritarianism”, expressions often included in the so-called key to the analysis of Turkey the reference to the month of July 2016 seems to provide.

And I take the risk of providing a key that would fit the lock this time: the withdrawal from the “peace process” in 2015, or “resolution process” on the Kurdish question, less than a year following the election of Recep Tayyip Erdogan to the presidency in August 2014, and the beginning of the split in the alliance with the Gülen Brotherhood over sordid questions of finances and of corruption.

This famous “2016 coup” is thus a false key with which to analyse Erdogan’s policies and even serves as a means to bury the issue by creating a kind of novel opposing nice democrats and nasty dictators, avoiding the nationalistic and exclusionary nature of Turkey, of which Erdogan has become the true representative now that he wears the costume.

If one thing should stay in mind about this failed coup, it is not seeing it as the cause or the trigger to State repression, but rather like a easy and convenient excuse for it. Before all else, this controversial coup signals the end of an alliance and the maniacal reinforcement of Turkish nationalism. And this nationalism is not only the alliance with the MHP’s Grey Wolves, but also provides telling evidence that, in order to insure its political survival, the Kemalist opposition is ready to submit to the most abject abdications, no matter what political bragging its politicians may produce. Repression left, right and centre is thus made easier in the years following 2016. It is the very nature of this failed coup d’état that must be examined and what it means in the political strategy of those in power.

Omitting to mention that the rise to power of the President of the Turkish democrature now more authoritarian than ever and promoting nationalistic hysteria, occurred with the blessing of a number of European countries and aid and financial integration from the EU, is to fail understanding that the failed coup was but a stage in the process (breaking with yesterday’s ally, the Gülen movement). It is in the very nature of this political regime to engender repression violence, polarization, discriminations and exclusions…and, in this, the Republic’s original Kemalism served as an example.

I don’t claim to have covered the issue in a few sentences. For those who wish to explore more deeply the topics barely touched on here, the website has a search function by keyword that should satisfy your curiosity. And I cannot fail to refer you to susam-sokak.fr, the website of our friend Etienne Copeaux, historian specializing in Turkey, an essential which taught me everything. (In French only, unfortunately… at least, for the time being.)

Following the 2016 coup…the rest is censored.