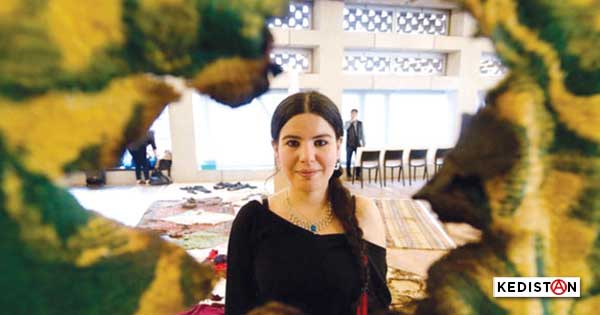 This article was published on June 4th 2019 on the website of Yeni Özgür Politika. Yeni Özgür Politika being unavailable within Turkey, Kedistan is acting as relay, including for the Turkish version, in solidarity and with  kind permission of the paper,  so as to give this article as wide a readership as possible.

Women, resistance and “what is left behind”

She first became known through her reporting done with a woman’s acuity. Shortly thereafter, we started seeing her drawings. In them she told things through another language, with other colors. In what she drew, there co-habitated both a form of nostalgia and a sense of rediscovery. No need to know anything about art. While attempting to give meaning to these strokes – and no doubt because we are from a people rendered mute – we couldn’t rid ourselves of the impression that these works had come through a difficult journey. The victory of reaching us by destroying the walls of prisons was embroidered in every stroke.

When women want it, when they decide to carry out their aspirations, the whole world experiences the contractions of a birthing. Later, listening to Zehra on Jin TV, we became convinced that she had a heart that took on the jail resistances, the testimony of Mother Sisê, the denunciations of fascistic practices, and that she took on this painful action as her own, living through the birthing in perpetuity. She had thus decided to give birth and no wall, including the walls of jails, could stop her.

She wrote, she drew in prison. She nourished through what she created those who knew her, who took interest in her. With everything she could lay her hands on, she told the tale of her concerns, of her heart and of those hearts she touched. Through her, we  discovered the reality of the fact that prison walls cannot impede, that prison walls cannot stop a true artist. We witnessed the fact that fascism could not reach the artist.

Zehra Doğan’s exhibition ran before my eyes as I was reading Arif Altan’s words describing the excavation trucks dumping the entire neighborhood of Sur into the Tiger. She called the exhibition “Left behind” and in it, she told the legendary tale of the resistance for self-government, three years ago.  Left behind after this historical resistance, there is her soul, persisting in the name of freedom in revealing the true face of fascism, but also the states of incompleteness, the mistakes the absences of beings. What did these three years cause? Who did what during these three years? Who was where, in the resistance, and where are they today?

Çiyager, Nucan and all the ones who, with the spirit of freedom and the forms of struggle they created during the resistance deserve the name of “21st century Egîd“1Legendary Kurdish commander 1956-1986left us with an understanding inspired by the Paris Commune and  even going beyond it.

Even objects are tools of resistance

“What is left behind” says Zehra Doğan. Some might ask “What could be left behind?”. An exhibition that shows objects transformed into tools of resistance in the name of existence.

We asked ourselves then and still ask ourselves now: what could be more sacred than a people that resists with its blankets, its rugs, its kilims, its plates and spoons, who carries all its possessions on its back and who stands by the side of those young brave ones who died for it?

Telling today of the resistance in Sur, in Cizre is as sacred as the resistance itself. Zehra Doğan endeavours to testify. She shows courage, she offers her own chest as a shield and expresses reality through art. We experience this even more deeply because of the courage developped in telling of the resistance to which the world remained deaf.

Telling people about the pain

Thus, Zehra saw what was left and she wanted to show what she had seen. How right she was.

Undoubtedly, “what is left behind” tells about resistance as well as about pain. We are in a struggle for existence, facing an unfeeling genocidal system that negates the fact that we may suffer, even if we are one of the world’s historical peoples. Kurds are considered as non-existent. Therefore, they cannot suffer? Sometimes, they are treated, at best, like useless objects.

Even today, in the past week, we have witnessed torture in Haifeti in the province of Urfa… While even animals victims of the violence occupy the Turkish media for days, the blindness and deafness concerning to what the Kurds are subjected is nothing but the institutionalization of the genocidal system.

In such periods, the efforts of an artist to tell all of humanity about the suffering of the Kurds shows us her most human side. It isn’t possible for a person not having lived the resistance and experienced its suffering to retransmit it this way. This is where Zehra Doğan’s resistance, her exhibition transmitting her testimony, takes on its full meaning.

At a time when the value of a human being is merchandized, preserving these fragments of life touched by a Çigayer, a Nucan, directy from the heart of the resistance, and bringing them to light, is the language of reality that becomes this woman so well.

That is precisely why Zehra Doğan is a true artist. A woman who, by her words, by her colors, by her heart, endeavours  to study the human sensations in the world, on which she looks with her womanly sensibility.

She must draw on the walls of Kobanê

She must not forget, and she must ensure that nothing is forgotten. Free Kurdistan needs the touches of artistic resistance. Thanks be to her hands, to her work, to her heart.

You may use and share Kedistan’s articles and translations, specifying the source and adding a link in order to respect the writer(s) and translator(s) work.