Translation from the French of an article by Xane Anuş, published on March 26 2019 on Gazete Karınca, “Antigone olmak”, “Being Antigone”

Times that tear the chest open must be times such as these. Hunger, death, life, despair…Do you not experience it too, as if a god wishing to test us, had compressed everything that is bright and dark and that touches on the human, into a wedge of time and locked us inside?

When were we thrown into this well? Does anyone remember? If anyone asked us, we would say we have always been here, stuck in these times, and resisting. But perhaps there was another order of things before, one in which we were not tested to such an extent and where we hadn’t fallen into this vortex where the days turn into their own repetitions.

Every period bequeathes its own knowns and unknowns to the period that follows, so that forgetfulness should not become too desperate and melancolic, from the singular to the plural.

Forced scribblings flow from the pencil, most of the time. But we have an absolute need to write. These verses by Gülten Akın “We have stopped at the most complex spot of the era/ Someone wrote about us/If we do not write ourselves, who will do it?…” are these words not like an ukase?

A woman, stretched out in her hunger, melting away ounce by ounce and she says: “you, do not die.” Her daughter at her bedside. She watches her mother melting away. Then other mothers arrive, having lost their children, who could not cry over them. Other women who resisted so that “other children would not die” arrive, from far away, from Argentina or from Amed, just next door…

Then another mother enters. Heads held high, they understand one another wordlessly. The victory sign. The tearful eyes are filled with sadness, but the fingers make the sign, describe the conviction. She has lost her child. Recently, not even two days ago. A mother to whom even the right to bury her child was denied… 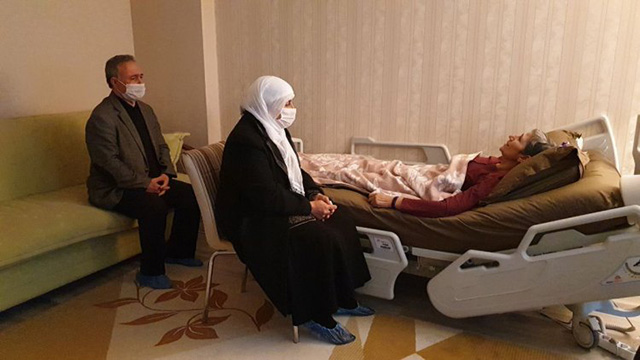 The visit of the family of Zülküf Gezen, who, to protest the isolation, took his own life in the prison. Photo of Mesopotamia Agency..

Later, sounds arrive from elsewhere, through invisible walls. In fact, they are not sounds, they are the corpses of those rebelling against their bodies, against the silence, sounds from the inner world. The ones confined between four walls tell us things through their body, through their death, despite those who do not allow them to hold on to living, to life.

Will we manage to hear them?

And a cycle; Zülküf, Ayten, Zehra, Medya… A new one arrives, bringing a name and a faded photograph. Followed by shares with “#…IsImmortal”, with the indication “living revolutionary” on the social media keyboards…

Their birth dates are so familiar, aren’t they? Children born in the midst of the storm, and who turned into tempests. All of them born after 1990. Their story, their “fates” are the same.

The land’s honorable resisting children who wish to be immortal, who wish to cling to life…by the doorjamb.

Will we manage to see them?

Then some advice-givers show up, in the “life is sacred” mode. In their dim and servile brains, filled with cobwebs, they give birth to contradictory words using the bodies of their dead children.

From the greatest opponent to the friendliest, or to the greatest enemy on these lands, the Kurds have been tested for ages through their dead.

One the the great tragedies written by Sophocles is a myth inherited from a thousand years ago; Antigone. In all the rules written and unwritten that speak of “human rights” she is described as stating “in all of human History, the right to bury the dead and mourn, is the most fundamental right.” So now, who will claim that the resistance Antigone led for the right to bury one’s dead, was nothing but a myth left behind in History?

From Taybet İnan whose body remained in the street for seven days, to the youngsters whose corpses were left for days no more than two meters away from their families in Sur; to the bodies torn apart by cats in the streets of Yüksekova, à Hatun Tuğluk, whose body was exhumed; and again, to the fact that in Bitlis, the families have still not received the bones of their close ones, fighters in the gerilla, a right of burial they have had for years now…

“The right of burial” is subject to a hundred year confiscation. Yesterday as today, we are put to the test, always through our dead. The rest of this story would make for a long article.

Every day, we are put to the test again, by death and by our dead. The bodies of the children who, between those four walls, threw their body onto the scales, against the insistance on  isolation of a sytem that tramples humanity’s age old values, removing their bodies in the night, without the families’ authorization.

A cemetery, darkness and the right to see for the last time, even this is stolen from a mother and the bodies are buried as clandestines.

We are tested through our dead by the hand of the State; dominated by hard labor and precariousness, a changing yoke at the whim of those who hold it and, most of the time, toys to amoral powers.

The mothers, bodies lent to hunger, the mothers whose right to “see for a last time” is confiscated …Our conscience is put to the test, in this cycle of time that holds us prisoners.

And they tell us things, these bodies melting away, giving up their life. Will we manage to purify ourselves of our a priori and a postiori, and understand?

Faces suspended in time
How many are your names
In the days of forgetfulness of cursed memory
Lives straightened out
Tomorrows the price of which is largely paid for
Dead ones clinging to life
Eyes that smile
One side of me announced Paradise
The other the flames of hell
In this era, what is left to us is to die
What is left, to be mortal

Kedistan : This article was written in reaction against the systematic confiscation by the Turkish forces of repression of the bodies of the ones who committed suicide in jail in the past month, followed by the banning of their burial by the families and their close ones, tying this punitive practice to all the other discriminations the Turkish State practices against the Kurds.