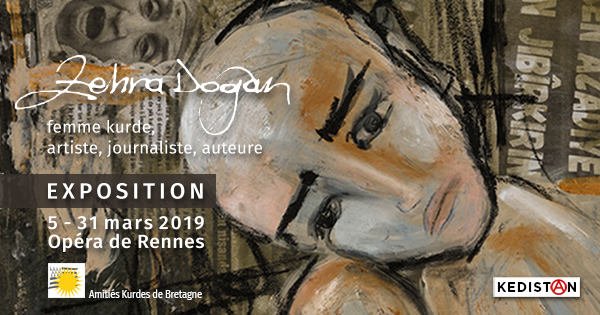 Original works by the Kurdish journalist, artist and writer Zehra Doğan keep on finding their public in different European cities while she counts down the final days of her incarceration in Tarsus prison.

The next rendez-vous will be in the Carré Lully exhibition hall of Rennes’ Opera House, from March 5th to 31st. The exhibition is organized by the Kurdish Friendship of Brittany – Amitiés Kurdes de Bretagne, in partnership with the Rennes Opera House, the city of Rennes, the Maison Internationale de Rennes and the Baba Zula bar. Scenography for the exhibition will be provided by Philippe Leduc from the Lucie Lom workshop, in solidarity with Zehra.

More than 30 original works will be exhibited from two artistic periods.

“The clandestine period” covers works executed beginning of 2017 in Istanbul where, following her first arrest in July 2016 and her release on bail, Zehra had found refuge while awaiting the decision of the Court of Appeal. The drawings and paintings of that period describe the events and destructions which Zehra witnessed in the preceding years while covering as a journalist the curfews imposed in Kurdish towns in the East and southeastern part of Turkey, in the end of 2015.

As for the “jail period”, it provides a look at the works executed by Zehra in jail, when she was denied all access to artistic materials. Determined and most inventive, Zehra then managed to express herself using whatever means were available. She obtained pigments by using foodstuffs, or molds, bird droppings, or menstrual blood. With brushes made out of bird feathers or the hair of friends sharing her prison quarter, she painted on whatever medium she could lay her hands on. Wrapping paper, cigarette papers, reverse side of letters, sheets, pillow cases, old clothes, everything held possibilities… Indomitable, she went on creating. She also pursued her writing and her drawing so that her thoughts, as well as those of her co-detainees and of all political prisoners “may leave the prisons by the thousands, like branches of ivy, reaching us on the outside, and making beautiful flowers blossom there.” *

Discovering Zehra’s works is a conversation, a transmission, a raising of awareness. And, in all simplicity, she gives us a lesson in resistance. 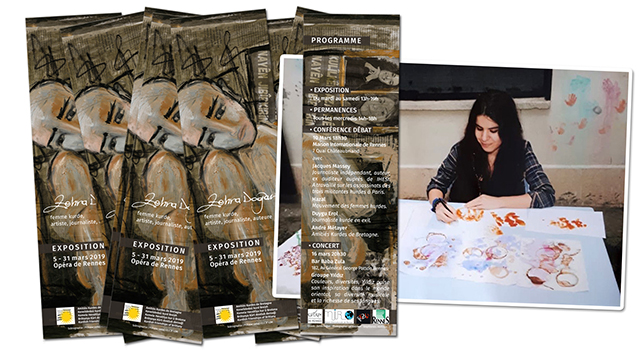 This exhibition in Rennes includes an important date in Zehra’s struggle: the world-wide Day for Women’s Rights.

Nourished by the women’s struggles within her culture, Zehra speaks to us as a Kurdish woman. A universal, collective and feminist message flows from her pen and her paintbrushes, with deep roots in History and serving as an archive for the present. She whispers truths and reflections to the ear of everyone, everywhere in the world and when words are not enough, she uses art in order to speak to consciences through the eyes.

Woman, not only the Kurdish one but as a universal presence is everywhere in Zehra’s work.  Be it text or a visual medium. Despite centuries of annihilation, of oppression, of targeted aggressions, this woman has never lost her ancestral knowledge and experience. She draws her strength from this “matrilinearity”, from her kinship with nature, a spirit of solidarity, her desire for revolution, beginning with the recovery of her true self. The key to a better world necessarily runs through such a woman…

Rennes will benefit from a whole programme around International Women’s Rights Day, from 5 to 29 March. Conferences, readings, meetings, debates, exhibitions and shows… And Zehra Doğan’s pictorial testimony will be a highlight…

The exhibition will be accessible from Tuesdays to Saturdays between I PM and 7 PM.

It will be inaugurated on March 5th at 18 PM

Someone will be in attendance every Wednesday between 2 PM and 6 PM. Those who wish to learn more about Zehra’s expression and testimonial are warmly wellcomed. Kedistan will contribute its modest share through guided visits.

This exhibition, an invitation to listen to Zehra’s silent cry of transmission, will also serve as the epicenter to other initiatives.

• A conference and debate will be held on March 10 at 6h30 PM at la Maison Internationale, 7 quai de Chateaubriand.

With the participation of

• A concert on March 15th at 8:30 PM (attention the date of 16th March is changed) at the Baba Zula Bar, 182 General Patton avenue in Rennes,
for a total immersion in the colorful universes of the Yıldız group, which draws its inspiration from the oriental universe, its musical diversity and the richness of its tongues, be they Kurdish, Armenian, Turkish…

You may look up the exhibition event here on Facebook.

And you can also follow and read Zehra on social networks: on Facebook by signing up to the Free Zehra Doğan page. Here is her Twitter account @zehradoganjinhaa. During her absence, her accounts are managed by family and friends. 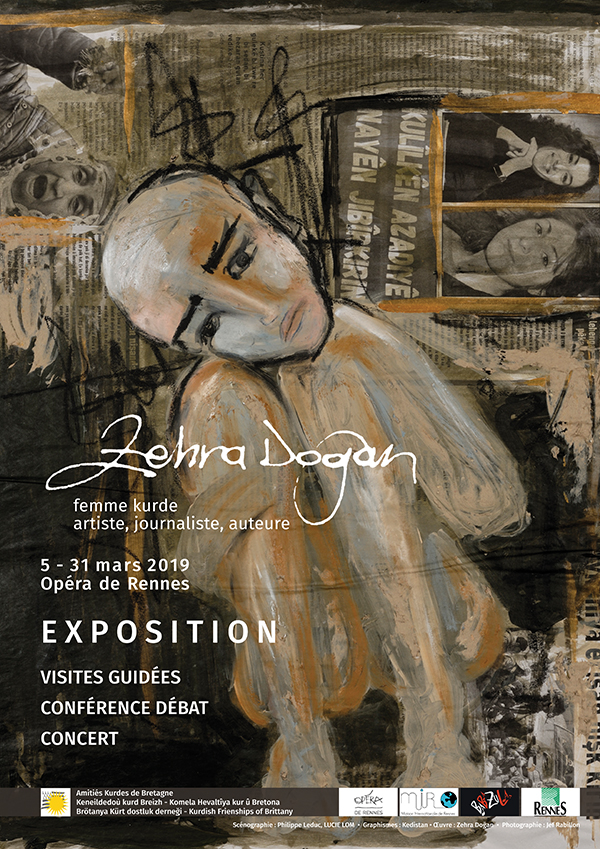