Turkey • “Be Poor for the Nation’s Sake” 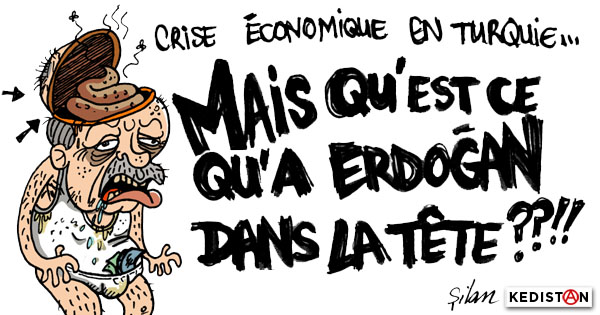 In Turkey, the official September figures showed a rise of inflation by 24,5% over the past year. The price of tomatoes has doubled.

I talk about tomatoes so often you’ll think I never eat anything else. In fact, since my pension has lost a quarter of its value, the opposite is true; I can’t afford them anymore.
This should please Erdoğan: even the price of eggs has gone up. Rotten tomatoes and eggs to throw at him? Too expensive!

And that’s before mentioning the cost of transportation, gas and power! We’ll have to pull out the padded jackets for winter.

Considering everything they tell us Turks about the Greeks, to live like one is a real joke.

I don’t understand much about these things, but I hear the central bank raised the interest rates in August and that caused the Turkish lira to rise on the Market. Not on mine, that’s for sure.

In the Reis’ family, the son-in law Berat holds the purse strings at the Stock Market. He’s asked businessmen for a reduction in production costs or for personal sacrifices in lowering the prices anyway.  Personally I think small businesses will shut down and the others will lay off workers…

In other words, it’s turning into “Be poor for the Nation’s sake”, “Against Foreign Plots”.

When, at the same time, I read that Turkey shines on the world stage because of its planes, bridges, roads, dams, airports, soldiers, nuclear power stations soon, islamists, jails, Saudi Arabian consulates, news rags, journalists in jails, Russian buddies, a genocide in the closet… I hark back to the words “the pride of being Turkish” with which the unemployed will warm themselves soon.

There was a comic strip in France. I think it said something like “The crisis, mehhh” and everybody laughed. Another said “And you think that’s funny? Well, we’re the joke now as the people slosh around in Erdoğan’s brain. 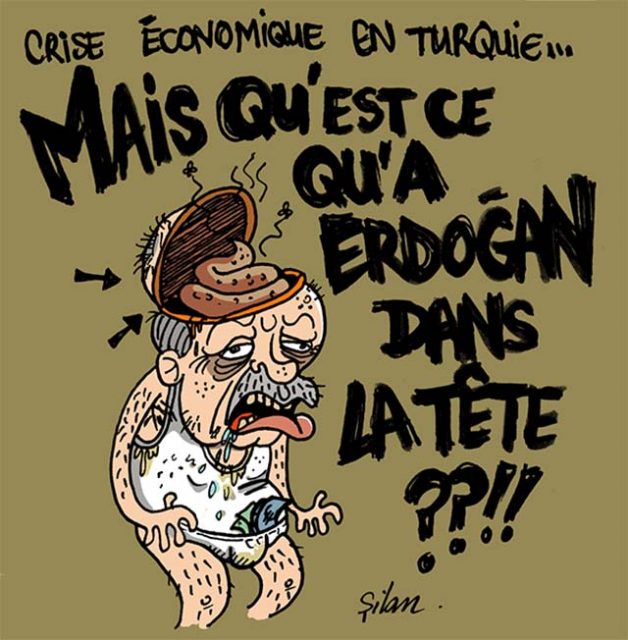 And of course, with elections coming up in March, AKP loyalists and other such bigots will receive distributions of coal and gas in their homes while our elected members of parliament and journalists freeze their tails off in jail. Who will become Mayor of Istanbul? Will the band leader double up those duties with his job as President? That would mean changing the constitution again…

As for the latest story making the rounds – it’s not bad either. Have you heard of the new butcher shop that’s just opened at the Saudi Consulate? No? Apparently tons of cats are lurking around there, thanks to all the fresh meat.

I know, I know, none of this is very political, I kvetch, I insult the Leader gratuitously but for once I don’t have to pay. I’m entitled, no?

Illustrations :
“ECONOMIC CRISIS IN TURKEY: WHAT DOES ERDOGAN HAVE IN HIS HEAD?”
Illustrations graciously offered by Şilan. silan-art.blogspot.com