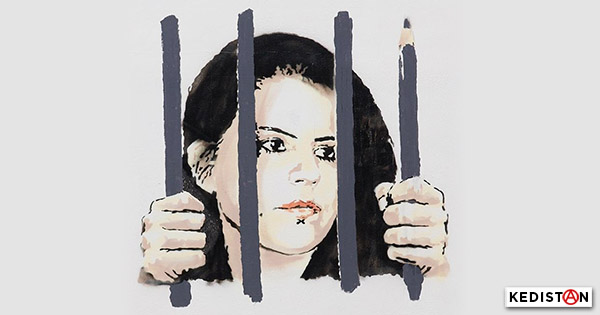 During an exhibition of some 40 original works by Zehra Doğan in January, the big question of ‘’Art or not Art?’’ was posed.

The question was posed, in front of my very eyes an into my very ears, by an important gentlemen armed with the latest top-shelf iPhone, a blue folder and a grey laptop. After having begged himself a place at the table I was sat at, this ‘’Important’’ gentlemen, who presented himself as someone ‘’doing cultural work in Brussels’’ (a European film festival was taking place there the same week), said to me straight off the bat: ‘’it’s powerful… but it’s not Art”. He then proceeded to make a few phone… important phone calls and to tap away, with earnest, at the keyboard of his laptop computer.

With two simple phrases, this contemporary art big-shot (and decision maker according to his own words), managed to nail Zehra’s canvases to the walls of politicals scribblings. I’ve got the feeling that what recently happened with a Banksy piece in London is the best possible answer one could provide to such an ‘’important person’’ and to all the ‘’important people’’ of so-called contemporary Art. 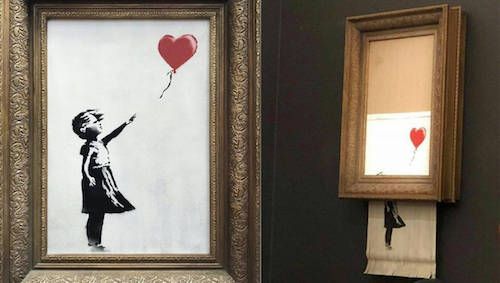 To refresh your memories, the Friday 5th of October in the Sotheby’s auction room in London, the Banksy piece ‘’Young girl with red balloon’’ was put on auction… Quickly sold for a priced of $1.8million, the piece was reduced to strips by an improvised shredder built into and hidden within the large frame, under which the work ended up hanging lamentably. The scene was filmed and Banksy himself unveiled the action on social media, an action carried to avoid to piece finishing up on the ‘’market’’ which Banksy himself abhors.

It’s of course much easier to talk about a ‘’bad joke’’ and to emphasise the fact the piece of art had ‘’thus acquired value’’ rather than interpret the artist’s gesture as an additional denunciation of the ‘’important’’ tax haven that contemporary Art has turned into, to suh an extent as to define Art as a merchandise subject to financial speculation.

But let’s get back to Mister Europe. If he had have been present at Sotheby’s, he would have surely cried out “It’s powerful! But it’s Art”, jumping thus one step ahead of all the other big-shots and their over-complicated commentaries on the “performance”. I read somewhere a comment by a certain Blandine de Whatshername, important Banksy specialist if ever there was one, in which she spoke of the “paradoxical relations between marginality and commercialisation in Art.” She continued, saying “If it’s a simple question of thumbing one’s nose at the Art marker, the gesture actually backfired given the fact that many specialists agree with as Miss Champagne and Miss Lavoie-Dugré, who believe that the hanging, shredded piece has since gained enormously in value.” Close the market!…

So last march, when the very same Banksy painted a mural fresco in support of Zehra Doğan and projected images of the art work which led to her incarceration, was that Art? The mural fresco grabbed quite a lot of attention, and six months later Banksy had it covered over to leave room for others, and also undoubtedly to avoid any “commercialisation” of his support. A letter exchange followed between the two artists, which also caused quite a stir. “Yet another very Banksy-like ‘move’ “ the big-wigs must have raved and ranted.

In a recently published articled, and in very many of her letters, Zehra, far away from the big-wigs, the Blandines and the Whatshername de Champagnes, tempts to define that which motivates her and to situate herself as an Artist. She has never frequented the contemporary Art scene in Turkey. Had her freedom been preserved, she would have frequented even less those taking part in contemporary self-censuring taking place in Istanbul.

“By replenishing myself with the Kurdish women’s struggle, through my writings and my art I work towards purifying our soil stained with blood. I wish that all that which has been lived shall not be forgotten, blacked out, and that truths attach themselves to my canvases. That’s why I’m in prison.

And now, here, they don’t give me what I need to draw. Still not satisfied, they confiscate the pigments I manage to obtain from leftover food scraps…as well as my drawings.

But I have no right to use all that to justify my throwing in the towel.

My testimony proves that I don’t have that kind of luxury.

My struggle has taught me that no real obstacles exist when it comes to creation. And if such a thing does exist, it would be nothing else but one’s self.”

That is the most important.

And nor do we here have the right to use the pretext that the capitalist commodification of all things imposes upon us its market laws as an excuse to throw in the towel, even when it comes to solidarity.