Afrin: the war without images 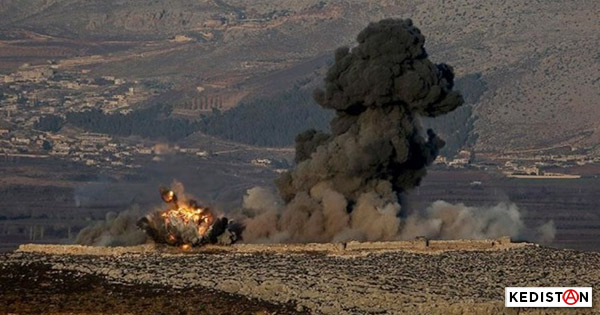 The enclave of Afrin, 3rd canton in the Northern Syrian Democratic Federation, has been living under bombardment by Turkish F-16 and tanks since the Turkish President Recep Tayyip Erdoğan decided on January 20 to attack this peaceful province that had managed to stay out of the massacres and destructions still ongoing in the rest of Syria. His army is supplemented by thousands of fighters (a figure of 25 000 has been mentioned)  from the Jihadist brigades of the SLA, Al Nosra, but also from ISIS, which means a return of ISIS in a region from which they had been ousted a good while ago.

But French and European media barely evoke this attack from time to time. Yet the bombings of the Ghouta region by the Syrian government are largely shown and commented. Why such a different  treatment of information when less than 350 kilometers lie between the 2 regions? Why is the most minor of train derailments in deepest Nebraska or a landslide in Columbia the topic of television news coverage while the invasion of Afrin is a non-media event? Quite simply perhaps, because there are no images.

In order to understand this silence and this lack of images we must go back to the aborted attempt at a coup d’état in Turkey in July 2016. Other than the dismissals and massive imprisonments that have affected all sympathizers of preacher Gülen, or those deemed to be so, the media in all its manifestations, newspapers, tv stations or internet press were targeted by the regime. 156 médias, including all Kurdish newspapers and tv stations, have been shut down since 2016 and one third of all the journalists imprisoned across the world are in Turkey. Attempts at resistance by journalists such as the protest against the closing of the daily Özgür Gündem, in order to defend pluralism and freedom of the press, earned journalists expressing solidarity immediate arrests under the accusation of “supporting terrorism”.

On February 16, three famous Turkish journalists, Ahmet Altan, Mehmet Altan and Nazlı Ilıcak were sentenced to mandatory life imprisonment, the heaviest possible sentence since the Turkish president has not reinstated the death penalty yet. Their crime ? In a TV program broadcast on the eve of the attempted putsch, they are said to have criticized the authorities including the president himself, thus sending “a subliminal message of support to the putschists”, according to the prosecutor. An accusation and a sentence that are more reminiscent of the witchcraft trials held in Salem in 1692 than of the normal functioning of justice in a democracy.

The Germano-Turkish journalist Deniz Yüksel, Die Welt correspondent, was imprisoned without trial for a year and owed his liberation solely to the heavy pressure applied by German diplomacy and by Angela Merkel in person on the same day. Deniz Yüksel had dared report on compromising leaks about the Minister of Energy, Berat Albayrak, who also happens to be Recep Erdoğan’s son-in-law.

It is in this noxious atmosphere that, on the eve of the launching of the Turkish invasion in Afrin, journalists still free received very strict directives. They were warned they must “take national interests into account” and at all times “remind of the care taken by the armed forces not to harm civilians”   and «avoid news that might raise the morale of the PKK/PYD”.   Thus coverage of the offensive is provided by a selected Turkish press, already gagged in any event. As for the international media, they are almost absent. Foreign TV crews are kept from entering the territory and even  journalists for the written press, covering the attack from the border, have little information other than that distilled by the Turkish army’s press service. « Journalism is practically nonexistent in the operational zone” says Erol Onderoglu, Reporters Without Borders’ representative in Turkey.

With one exception, however, that of Robert Fisk, who, on the strength of his very good relations with the Bachar Al Assad regime, was able to reach Afrin and wrote a series of three reportages for « The Independent ». Three astonishing articles in which, writing in the first person, he relates his personal impressions on a war that is not really taking place since, according to him, everything is calm in Afrin where “it is hard to know what the YPG are fighting for” – title of one of his articles where he presents a doctor in a hospital as “an official of the YPG“… Nothing very compromising for Turkey up to that point, except he then commits the unforgivable and writes an article the title of which designates civilians, babies, as the first victims of this war. The reaction from the Turkish side is not long in coming and a journalist in the widely circulated Sabah denounces him in her column titled “The yellow journalism of Robert Fisk” as « an instrument of PKK propaganda and of its Syrian branch the PYD”. She reproaches him for not consulting “any Turkish sources, whether official or not, before writing his article”, mentions in passing the doctor as a source “who does not deny his affiliation with a terrorist group, the PYD” and does not hesitate in declaring that « the main purpose of this operation is to save the population of Afrin from the oppression of the YPG”. Of course, denying the 180 civilian deaths listed thus far is difficult, but the explanation is simple, she quotes the Turkish Prime Minister, Binali Yıldırım, who declared that « the civilians were targeted by the YPG, not by the Turkish armed forces.” The bombs from the F-16s and the tanks are not the ones killing the civilians, the People’s Defense Units, the YPG are the culprits, according to the government and the journalists following order, the only voices authorized to express themselves on the operation cynically labelled “Olive branch”.

This total stranglehold on information greatly complicates an understanding of what is happening on the ground. According to Russia Today (RT), an agreement failed between the regime and the YPG in order for the Syrian army to intervene and push back the Turkish invasion. The Syrian government demanded the disarming of the YPG in exchange for its help, an unacceptable condition for the defenders of Afrin. In the meantime, the nationalist propaganda of the Turkish government was in full swing, heating to the boiling point a public opinion already conditioned by one-way information, with few voices speaking up abroad to denounce this drift. Between juicy economic contracts and rivalries among the great powers, the fate of democracy and of freedoms in the region do not seem to weigh much, and the reactions to the smashing under the bombs of the feminist, multiethnic and democratic project of this canton of Rojava will go unnoticed, since there are no images.