Erdoğan… Leave us in peace, not in war! 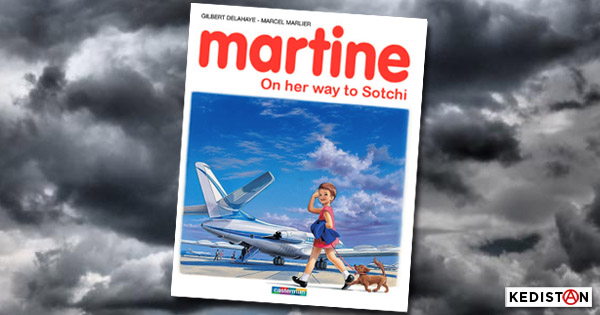 (Martine on her way to Sotchi)

Erdoğan in Antalya, Erdoğan at the Congress, Erdoğan in Syria, Erdoğan in Sotchi, he’s a bit like your Martine character. Except in his case, it’s in order to prepare yet another huge onslaught against peace.

Did you see how he protested against the NATO maneuvers where, apparently, the portrait of Turkey’s little father and his own were used as enemies in target practice? NATO apologized. I mean, really!

But did you also hear how he re-launched his anti-Kurdish war by declaring from the word go that the Kurds had to disappear from the canton of Afrîn in Northern Syria. You all know this canton is part of the Northern Syria Federation, opposed to Bachar, although neither Jihadist nor entirely Kurdish.

But it’s the fashion these days to say that the Kurds are such insatiable conquerors that they would even proceed to re-conquer the territories on which they have been living for so long, just to be annoying and eternal war-mongerers. I was even translated an article from your French Le Monde that might almost convince us of this, because objectivity can lead to recopying anything… Some of your journalists spend too much time with our nationalist liberals, you know! By the way, hail Marie…

In short, Erdoğan and his ministers are setting the table again. With the help of Atatürk supporters in parliament, they voted a more than consequential military budget, specifying it was only meant for the Kurdish threat on our borders, and are now pointing their tanks toward Syria again.

Idlib… I had never even heard this name before the town of Alep was subjected to the martyrdom you know about and its population sent into “de-escalation” as they call it. I hear that you, the French, force snails to disgorge before you kill them. I get the feeling that “de-escalation” is something like that. Zones where populations are sent to die of hunger in refugee camps, while the Jihadists go on fattening themselves and gathering weapons thanks to our kindly President who will need their services against the Kurds…

But please, all this is being discussed in top-ranking summits, with official guests, declarations and all. In Antalya last Sunday, to prepare the three-way Sotchi meeting in Russia. Vodka, ayran and Iranian caviar. Tayyip, Vladimir and Rohani.

Apparently Erdoğan wouldn’t be as resentiful of Bachar anymore now that they share a common ennemy: those Peace spoilsports, the Kurds…

Minister Çavuşoğlu confided his thoughts to our local rags in the hope foreign media would relay his words. On November 17 in Istanbul, prior to the meeting in Antalya:

“The time has come to think about a political solution (…) Iran and Russia want Assad to stay during a transition period. The Russians need him. He was the one who invited their intervention. This is not of our purview. First, we must discuss it with the opposition (our friends). Now, Russia and Iran are not the only ones saying Bachar Al-Assad can stay. Saudi Arabia and France say the same thing. We mustn’t be too vindictive, but uniting everyone around Bachar Al-Assad will not be easy.”

And he hastened to add:

“We informed that the Kurdish YPG’s territorial gains worry us (…) The YPG never fought for the country’s freedom, nor did they fight ISIS because of its malevolent ideology, in fact they only fought to gain more territory

Following the pretty BBC report, in color, with truck drivers filmed from the back, telling us in detail how the Kurds had allowed almost the entire ISIS army to escape, apparently just to annoy Turkey, we should be ready for everything.

You’re laughing but that’s how our ministers inform us and, what’s more, how the so-called opposition blathers almost the same thing. Always to the trumpet sound of “the Turkish nation is endangered.”

And suddenly, we are back to “if you want peace, prepare war” resurfacing in our rags and in the mouths of our ministers and other AKP-compatibles.

I’ve been told that in Eastern Turkey, following the massacres of these past two years, fear is so ingrained that Erdoğan can move on to the rest of his program. After what has just happened in Iraki Kurdistan, we can expect the Syrian Kurds to soon become the targeted enemy of the great ground operations.