Kurdistan • A referendum, what for? (sequels) 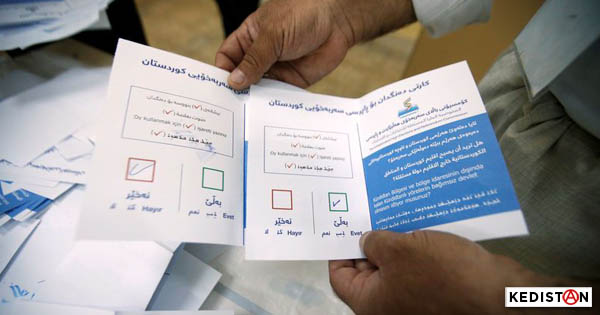 As could have been predicted, the sequels to the referendum initiated by Massoud Barzani in Kurdistan do not in any way resemble a path strewn with rose petals.
International medias paid scant attention to it, preferring to turn the spotlight on the “high and mighty” who declared it null and void prior to its occurence, or the bellicose ones in the region, suddenly reconciled against a political hand they find disturbing.

The 92% “sounding” provoked by this referendum and its overwhelming result in favor of independence has reshuffled a few cards in the deck, and has the merit of establishing a necessary ground for debate between Kurds and between the movements representing them, as well as in the midst of those movements themselves.
For now, as could be expected, the Barzani government has been content with gathering the benefits of what it considered as a kind of plebiscite in the context of the internal crisis within the partially autonomous region. Massoud Barzani himself declared that unilateral independence wasn’t forthcoming and this current President of the autonomous region of Kurdistan has reiterated on several occasions “that there were many questions to solve, notably, that of frontiers. For this, there would be need to negotiate with Bagdad, even if it took years.”
His internal Kurdish opposition returned the “compliment” by using this referendum as an opportunity to advance toward a Kurdish unity that would not be “nationalistic”, but veered toward proposals to end the crisis in the region along with the populations victimized by the ongoing wars.
The difference lies – and the Rojava example is essential to this reflection – precisely in the manner of analyzing the crises of the nation-states in the region, their origins and their consequences on the people. And this difference in the political approach necessarily leads to avoiding mecanical additions as if to provide a missing link in the late Sykes-Picot agreements of 1916.

In very practical terms, the referendum has caused a quasi unanimous wave of international diplomatic reprobation, from the very ones who, in order to resolve the crises, have always proposed re-apportionments or the creation of new States, as was done in Europe in the nineties.
For over a century, liberal capitalism has always sworn by nothing other than its classics.
And yet, the after-ISIS is visibly far from being thought out by the international or regional protagonists, and the nesting-doll arrangements of the future Middle-Eastern negotiation tables are endlessly in the process of being constituted. The urgency remains in stretching out the duration of the wait.

The victory in Mossul achieved over a hecatomb of civilians and soldiers history will recall as “war victims”, with an official number to be provided at a later date, was soon eclipsed by what is more than a “stiffening” on the part of the central Iraki government, goaded by its Iranian allies.
You know of the blockade initiated as a retaliation against the referendum results. A curfew was even imposed in Kirkuk.

“I appeal to all : we do not want an armed confrontation. We do not want confrontations. But federal authority must prevail,” declared Iraki Prime Minister Haider al-Abadi, during a visit in Paris. The new French President replied that he was “pleading for the recognition of the Kurdish rights within the framework of the Constitution and that there existed a path respectful of the people’s rights which allowed for the preservation of the constitutional framework and the stability and territorial integrity of Irak.” His words on Catalonia [English translation to follow] were practically a copy and paste of these.
For their part, the Turkish government and the Iranian leaders blew both hot and cold, with threats and blockade measures.
Erdoğan had already declared shut the “faucets” for oil refinery of crude oil from the Kurdish Iraki zones, along with other breaches to the circulation of merchandise and food supplies. He massed tanks on the border in support of his words.

Everyone knows that the regional leaders can’t live up to the anti-Kurdish ambitions they display so ostensibly. But the global crisis in the Middle East causes legitimate insecurities, having demonstrated that warlike logic and barbarity lead to uncontrollable outcomes.

“From the perspective of Iran and of Turkey, Irak and Syria are indivisible and independent entities. We will accept no modifications to the frontiers”, Rohani declared during Erdoğan’s visit in Teheran on October 4. Erdoğan used the opportunity to issue new threats, in accord with his suddently discovered “Iranian homologue”.
Claiming the referendum caused the “rapprochement” would be a mistake. It only serves as an occasion for its display. Besides Turkey and Iran’s wishes to “do commerce” again, the AKP policy is readjusting within the fog of the American positions, and following judicious advice from the new Russian ally. And what it most matters to remember of these meetings are the application of the agreements in the so-called de-escalation zones in Syria and the common deployment of “dedicated forces”. We can wager that Erdoğan will interpret that as a blank check for his military presence and that of his support troops in the Syrian frontier zones, especially alongside the canton of Afrîn. In fact, one of his ministers declared that “everything was at the ready.”

When you add up all these bits of information, meetings, threats and gesticulations, you realize that the referendum served more as an excuse for the wolves to surface out of the woods than it changed the deal for the Kurds in the region, and even less for the populations as a whole.
The Iranian government pursues its repression of minorities, while the Bagdad government recovers its legitimity and drapes itself in the diplomatic “Mossul victory”, the federal entity in Northern Syria is under direct threat, as Raqqa is about to fall…

So this referendum was nothing more than a survey?

The populations involved obviously do not see it that way. But reality confirms the views of those who, although not opposing it, considered this consultation without real possibilities for tangible results, given the very structures of the autonomous region, the absence of democratic functioning, and the absence of true territorial limits in economically rich and contested zones.
Kurdish rejoicers face a titanic job in order to come together on a political project. And those who, out of pragmatism, call for this unification, also know perfectly well that it will come up against fundamental class, social and environmental questions it will have to resolve through a common path for the people involved, as a solution to the Middle Eastern crises.

The budding project in Rojava is one such path, a fragile one, and still surrounded by wars. The referendum will not have contributed to consolidating it in any way.
In a previous chronicle, I wrote : “Playing the winning referendum card in this context where all the economical, political, military and religious conflicts find no other outlets than a war of international interests between imperalisms, in which the canon fodder is supplied locally, is nothing other than an additional unpinned grenade.”

I admit we could be less pessimistic, but the reconquering of Raqqa by the FDS will better open my eyes and provide more of a reason to plant a rosebush for its flowering at the next Newroz.