Syria • Rakka, the agreement they’re all talking about… 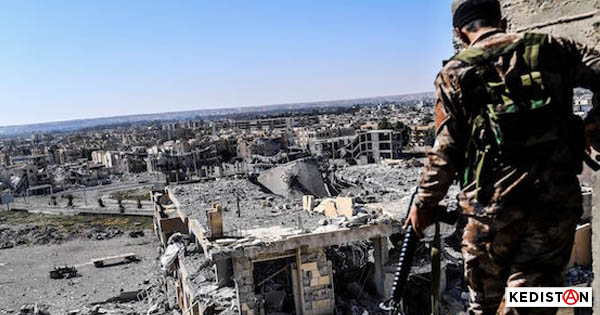 “Anger in Turkey over news of departure of last ISIS fighters from Rakka” headlined Le Monde. This is how the newspaper commented on the more substantial investigation by the BBC concerning an agreement between the coalition and the last ISIS occupants in Rakka, in order to speed up the end of the fighting and allow evacuation of civilians.

Other medias, picking up a feed from the AFP (Agence France Presse) talk of an agreement meant to accelerate the liberation of an “oil” zone.

At the onset, let’s mention that the reserves of Wahab, al Fahd, Dbaysan, al Kassir, Abou al Katat and Abou Katach lie in a desert region. Existing oil wells are south of the town of Rasafa and of its reserves, of which the Syrian army  had  already gained control in June with the help of the Russians and the Iranians. The FDS is currently regaining the others from ISIS in fighting as murderous as before.

So, of course, if the town of Rakka were also a hub for access to fossile fuels, mentioning it is an invitation to trigger a reference to Kirkuk in the reader’s mind. You know, that town and region of Irak rich in oil that the Kurds had supposedly colonized, and that was reconquered by the central Iraki government… allowing for an exploitation agreement with a large Russian group with international funds, an agreement Barzani had begun negotiating these last few months, before the autonomous region of Iraki Kurdistan found itself reduced to its previous borders and almost placed under embargo.

Why this insistence in presenting the Kurds of Syria, and more widely the Syrian Democratic Forces, as colonizers ready to do anything – including deals with ISIS – for the sake of widening the scope of their wealth and territory? The media campaign profiling itself is not only ignoble, it is partly inspired by declarations by the Turkish regime.

“The revelation according to which the so-called ‘Syrian Democratic Forces’ have reached an agreement with the terrorist organization ISIS for the evacuation of a great number of terrorists from Rakka is extremely serious and edifying. (…) This agreement is yet another example that fighting one terrorist organization with the help of another leads to collusion between the two organizations”, declared the Turkish Minister of Foreign Affairs in a press release published on Tuesday and disseminated by the regime’s medias, and a few others who would have been well advised to keep silent.

A great opportunity to associate, one again, the Kurdish movement and its allies with the barbarous terrorism of ISIS.

Yes, but what about the BBC report? I’ll let you be judge.

In some releases, based on this same report, the matter is presented as the flight of thousands of combatants, negotiated by the coalition and the FDS.   In others, there is talk of “several hundred armed combatants” and their families.

For his part, Colonel Ryan Dillon, spokesman for the coalition, has this to say:  “Of approximately 3 500 civilians who left Rakka on that day, some 300 were identified as potential ISIS fighters. The agreement with the FDS stipulated that photos and fingerprints of all men of fighting age would be checked to avoid the escape of known Jihadists.

I cannot claim with 100 % certainty that each combatant was identified in departing Rakka. (…) Some of these combatants may have managed to slip through among the civilians or pass themselves off as local affiliates of ISIS. When the convoy left Rakka, it was watched by coalition drones but the decision was taken not to bomb it because of the presence of civilians.”

No one mentions at any point the fact the FDS were the ground forces that registered massive losses in the past year during this operation of reconquest. And yet, only yesterday, the reports were filled with praise for them. Nor does anyone mention anymore that these same FDS worked to insure that Rakka’s temporary administration would be handled by the leaders of local tribes and inhabitants of the destroyed town, in a difficult balancing act respecting the declarations issued months earlier on this matter.  The agreement was based on the will not to annihilate the civilian population, in order to offer some guarantees for the future of those who had not taken part in the barbarity.

And what about the role and the presence of special forces from European governments at that point, who took close interest in the ISIS combatants who were made prisoner? What happened to them? And to the press who filmed the wives of French fighters and their children?

A part of the ISIS fighters joined the pocket in Idlib, others went to zones Bachar’s Syrian regime is reconquering on one side, and the FDS on others.

The great fear of seeing European members of ISIS return to Europe to wreak havoc on its capitals spread immediately. The BBC report was quickly translated and generously shared by the medias in the Putin nebula. We are even starting to see governmental declarations meant as “reassurance”.

There can be no doubt that the arrests of “ISIS refugees in Turkey” last week signaled the start of a fine offensive of media propaganda.  The unanswered question is that of the porosity of the Turkish borders in these zones, whereas control is watertight in Rojava. ISIS has kept its regular habits and taken to its usual transit zones, the ones the Turkish regime wanted to use as a buffer and that serves to launch attacks on regions of the Northern Syrian Federation and its cantons.

The Kurdish movement can hardly be fooled by this sudden flurry surrounding this “agreement”, similar to many others in Mosul which had released a lot more fighters, not to mention leaders with no further idea of their whereabouts. And what about the “de-escalation zones” agreed to between the Turkish regime, protector of groups one can hardly qualify as democratic, such as Russia, Iran and the Bachar regime? Tomorrow, of course, the FDS will be held responsible for the situation, and deemed untrustworthy. Not even to be trusted with supplied weapons, no doubt.

The butchery is coming to an end. The various coalitions have their minds set on the great sharing of spoils, in league against the Kurds, those spoilsports with their political project for Syria, who can then become convenient scapegoats.

In this flood of well-devised propaganda, resting at once on the fear of the return of Jihadists and the copy-paste habits of the media, no one will investigate yesterday’s collusions, the Lafarge cement plants, the ISIS cotton, the war crimes committed in Irak and Syria, be they by ISIS, the Bachar regime, the Iranian militias, the Jihadist factions, the bombings by the coalitions…

“Irresponsible Kurdish combatants will have been in league with ISIS against the civilized world and, for this reason, will deserve to be held in suspicion for the future, since their word can now be put into question…” Here’s betting this line of thought will be heard and will spread…

So, end of the fashion for women in battledress in our women’s magazines? The menace is back?

More is known on the “deal” today, thanks to the testimony of foreign combatants in Rakka. On the one hand – and there is nothing new in this – part of the evacuated civilians had been equipped against their will with explosive devices, in pursuance of their status as human bombs imposed on them for months by ISIS. This blackmail by ISIS did allow for the evacuation of heavy weaponry, forbidden by the agreement, and to avoid detection in doing so. On the other hand, the fighting had reached a point where civilian and FDS victims did no allow for further military advances, other than generalized bombing. (The same “agreements” were devised by the Iraki in Mosul). The choice of guiding the “evacuees” toward the zones that the FDS would liberate one after the other left little chances to the ISIS combatants, except if other parties on the ground let them through the sectors they controlled, toward Idlib and elsewhere.

In the background to all this: the various deals within the coalitions and the geostrategic contradictions between the United States, Russia, Iran, Turkey. The media have toned down their reports on the recent declarations of the Turkish regime’s intentions to reclaim the canton of Afrîn, for example (a component of the Northern Syrian Federation), in a complicit silence by all parties. There is even talk of this canton being a recent Kurdish “conquest” in the information obligingly published.

The harm is done. All the denials and testimonies will not erase the exploitation for propaganda purposes of a video, one of the co-directors of which has already illustrated himself in anti PYD propaganda before, for the benefit of medias at the boot of the Turkish regime.

All information obligingly disseminated in wartime needs to be looked at and shared with a careful eye on the context.