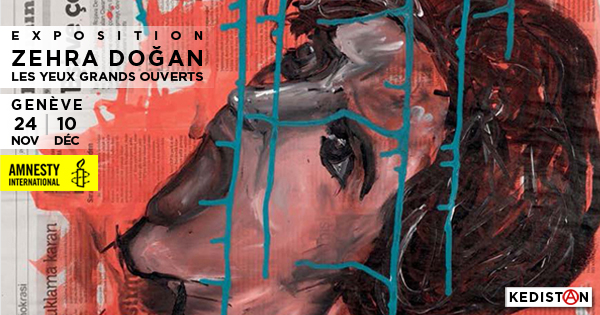 Following the attribution to her of the Freethinker Prize last November 5th in Zurich, Switzerland, through Amnesty International Geneva, is organizing an exhibition of some twenty prints of Zehra Doğan’s works, on November 24th.

The Geneva City Hall is supporting this initiative by the Amnesty Geneva groups, in the framework of the “Let’s Dare Courage!” campaign for Human Rights Defendors, focussing on Turkey.

The twenty or so prints provide a good overview of Zehra Doğan’s “escaped works”.

This exhibition titled “Les yeux grands ouverts” (Eyes Wide Open), will be held on the first floor of the Alhambar café restaurant, 10 rue de la Rôtisserie in Geneva and will run until December 10. 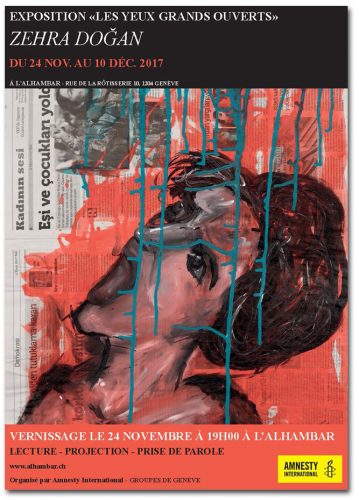 A round table will allow exchanges around Zehra’s emblematic case, the situation in Turkey, as well as that of the Amnesty Turkey activists whose fate remains problematic whether incarcerated or released pending further action.

Postcards will be available for contact with the prisoner, along with a book dedicated to Zehra and containing the majority of her works done prior to June 2017, along with texts. And, of course, some kedi will be on hand for the event.

The support campaign is growing. After PEN International placed Zehra on the list of authors and journalists subjected to repression it is championing, and following Reporters Without Frontiers, sections of Amnesty International are now bringing Zehra’s case to light.

Opposition media in Turkey can finally echo these developments so they can be read and shared in-country.

Kedistan will continue its support and can already announce other upcoming exhibitions accompanied by round tables, debates, concerts.

In sequence, from now until May 2017 the region of Morlaix, Angers and Paris are  programmed or being finalized for the original works. Other upcoming dates will involve the travelling exhibition of 20 reproductions.

For those now discovering this support campaign, all additional information may be found in this special dossier on Kedistan.