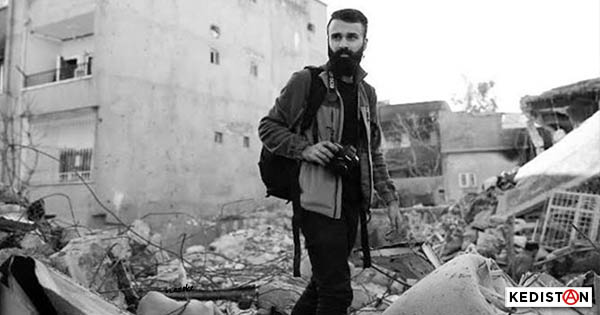 After 13 days in custody and in isolation, journalist-photographer Çağdaş Erdoğan, was placed in preventive detention in Istanbul on September 13 under the now-traditional accusation of belonging to a terrorist organization. He wrote an open letter to the media which was published in Turkish on P24 on October 10 2017.

I send you nostalgic salutations… In the face of this insane period, I hope you persist in being well. Do not worry about me. Despite the negative things I lived through last week, I’m well, and I hope I won’t be here for long…

My friends, most of all, I must tell you about an incident worthy of a “hidden camera gag”. As you know, on the second day of the feast of Kurban (Aïd), I was taken into custody. As motive for this custody, they claimed I had photographed an “invisible” building in Yoğurtçu park, a building supposedly belonging to the State. At first, I couldn’t make sense out of the situation. I understood what was at the bottom of it when they took me to the commissariat.

It was, in fact, the continuation of the procedure launched after I was targeted by A Haber a short while ago (media close to the regime). It would appear that the photos I took for international agencies and newspapers during the curfews in Cizre, Nusaybin and Şırnak, constitute criminal offenses. The straw that broke the camel’s back would appear to be the fact The Guardian mentioned a photo I had done in Nusaybin on it’s list of photos of the year. To state things briefly, my photos published in dozens of international newspapers and magazines, starting with The New York Times, the BBC, The Guardian, would fit in the framework of “activist manœuvres for an armed terrorist organization”! And the accusing authority which has lost all control on its own gearshift, has even included photos concerning the mafia and dog fights in my book titled “Control”, published in London, as “criminal proof” of the indictment “member of the PKK”!

To be honest, in these times when art, science and law are trampled on because of political phobias, I didn’t find this situation very surprising… I even experienced some pride over it. Especially when I thought of Hrant [Armenian humanist journalist assassinated in 2017 in Istanbul], Berkin [mortally wounded by the police during the Gezi protests in 2013 in Istanbul], Nuh Köklü [Journalist assassinated by a merchant in 2015 in Istanbul’s Kadıköy], Taybet’s mother [57 year old Kurdish woman killed by police in Silopi during the curfew in 2015). All these people, also victims of political security forces represented by accusing authorities and the madness they foster around them. I am conscious of the fact I am in prison for having defended, as a journalist, that the cliff of hatred created by the war is insane. The absence of a hearing during those 13 days of custody in isolation, and my arrest despite the counter-evidence produced, are proof enough. According to the authorities of the prosecution and justice, I am henceforth suspected of being a “member of a terrorist organization”. Therefore, The New York Times, The Guardian, the BBC and the others are terrorist organizations!

My friends, we will come out some day. The only thing we need is to hold on to each other. Draw, take photos, write…We are going through historical days and we are this period’s witnesses. We must be aware of that. I salute all of you, with nostalgia