He lived with close friends in Gazi, one of Istanbul’s popular and revolutionary neighborhoods. Like all young journalists, he did not have a fixed roof or home. He wandered like a pilgrim with his backpack and took photos.

His work quickly caught the attention of those in power… He had photographed and recorded images during the operations called « Ditches » that began in 2015 in Kurdistan, for instance, and which centered on Sûr, Cizre and Nusaybin. Because of this work, he was targeted by those medias who function as the media bureaus for the AKP regime in Turkey.

Çağdaş is an internationally known and appreciated photo-journalist. At the beginning of 2017, he was selected by the British Journal of Photography for its list of « Young promising photographers to watch ». He works with international news agencies such as AP, AFP, Getty Images but also with The New York Times, The Guardian, Wall Street Journal, Washington Post, Newsweek, Politico, Bloomberg, BBC and BBC Turkey and Buzzfeed, as well as with 140journos in Turkey. 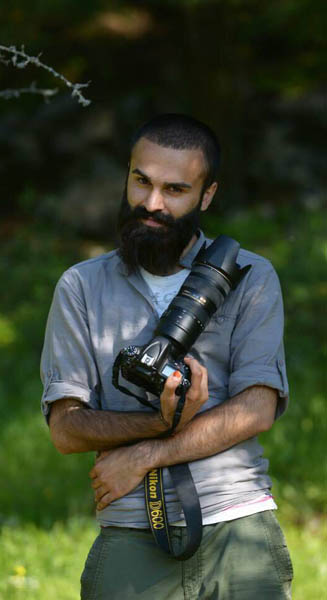 Çağdaş was taken into custody on Saturday September 2nd for photographing a building belonging to the MIT (Turkish Security) in Kadıköy on Istanbul’s Asian shore. During the 12 days in custody, he had no access to his lawyer, nor were his close ones, friends and colleagues informed of his fate. Çağdaş was brought before a judge on Friday September 15 and he is jailed, as many other journalists before him, on the accusation of belonging to a terrorist organization.

As soon as his incarceration was known, the Committee for the Protection of Journalists (CPJ) whose headquarters are in New York issued a press release calling for the annulment of the trial against Çağdaş Erdoğan and for his liberation : “Photographing a building is not and offence and even less is it a terrorist activity. » Robert Mahoney, Vice-President of the committee also expressed himself : “Çağdaş Erdoğan is being punished because he is a journalist who works on topics the authorities do not wish to see published. These illogical accusations must be lifted and he must, like numerous journalists in prison, be liberated rapidly. »

Valentina Abenavoli, editor of Çağdaş’ first book also expressed her support and specified that the journalist had been jailed because of his work in Turkish regions mainly populated by Kurds.

In support for Çağdaş, savor his work. Here are his photos…

British Journal of Photography • Ones to Watch: Çağdaş Erdoğan
Graphic museum of humanity • Istanbul’s Secret World That Reveals Itself at Night
The Guardian • Erdoğan vows Kurdish rebels ‘will be buried in trenches they have dug’
The guardian • Crackdown in Turkey’s Kurdish south-east turns journalists into ‘terrorists’
The New York Times • Photos of the Day: Turkey and Elsewhere
The New York Times • 15,000 More Public Workers Are Fired in Turkey Crackdown
Newsweek • Turkey’s hidden war is spilling onto city streets
140Journos • Night Blind
140Journos • Tüm boyutlarıyla kentsel dönüşüm (Réhabilitation urbaine)
and many others…