Ercan Jan Aktaş • The fight that makes you stronger and freer 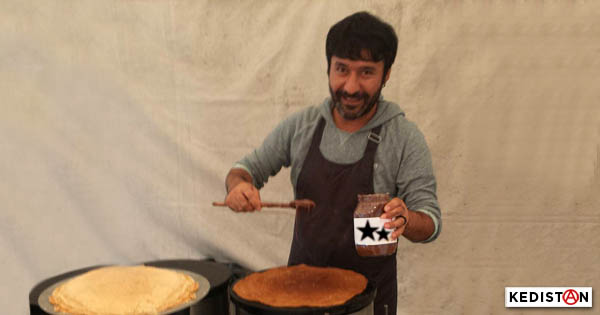 In his answers, Ercan Jan Aktaş also talked about his exile. He rounds out this interview with a letter for his comrades in the struggle.

We take advantage of this to further a reflection begun at Kedistan precisely on the topic of the forced exile of a number of people who, in some cases, were simply “involved” in civilian and humanitarian actions, who found themselves endangered when faced with the policy of blind repression applied by the AKP regime. Others were political militants or activists in banned associations covering a number of areas.

This exile often occurred in haste or in difficult conditions before avenues were closed off by decree in Turkey against entire professions, or following a firing, or because of the Turkey/Europe agreement on “migrants and refugees”.

As was the case in the 1980s then in the 1990s, this is how a “new layer” has come to be in the Turkish and Kurdish diaspora, one imbued with all the political and social evolutions, the “latest” concerns on the very nature of the Turkish nation-state forcing them to flee, or because of the emergence of “Kurdish solutions”. This addition to the political reflection must not be drowned in an ocean of indifference or in the guilt of being here while others are over there, be it in a prison of stone or one under open skies.

Every exiled person is faced with the question of his or her “usefulness” elsewhere, after having to leave the fight back home.

When he/she realizes that over here, these “causes” are ignored, deformed, vilified, when they don’t sometimes serve as an “excuse” for local parties in search of a bit of internationalism, he/she has the option of « integration » in the community’s daily life, or to continue sharing his or her knowledge over here… and to helps in setting matters straight.

But that supposes that he or she is welcomed and greeted.

I have been living in France for close to a year now. You opened your hearts to me, you opened your homes, you did everything for me by taking me by the hand, the way one brings a child to school.

With the help of your warm welcome, I have tried to surmount the difficulties I encountered. Ever since arriving here, I have received nothing but bad news from my country. Repressive and antidemocratic practices by the Turkish State have gone crescendo. Thanks to the power I found with you, I have tried to fight against these bad developments.

From time to time, I missed the streets of my country, my comrades and my family terribly. I tried to overcome all that with your support and your solidarity. Now, I have an adopted town by the name of Pau and an extended family. Wherever I go, no matter what I do, my heart will be with you.

I am well aware of my luck. You have made me stronger through your friendship, your support, your camaraderie. I will go on living the struggle that makes us stronger and freer.

Soon, my second address in France will be in Paris. At age 45, I will begin studies in a third university. I will study Political Science at Université de Paris 8. Moreover, I’m trying to organize solidarity concerts to benefit children living in towns in Kurdistan destroyed by the Turkish State’s war policies.

I will also get involved in conscientious objectors’ associations, with the LGBTI groups and the antimilitarists who were forced to leave their country and come to a European country, because of the war policies in Turkey and in Kurdistan. I wish to join forces with these associations, structures, groups and progressive Leftist people in France.

And I will go on transmitting information.

Once again, I want to thank you for your support, your efforts and your cooperation. We will move forward in life, one way or another, by struggling and resisting together.

My dream is to greet you some day in Istanbul and in Amed and to walk the streets of those two beautiful towns agains, with you.

Thanks again to Babet, Gerard, Eliza, Jipé, Jano, Marko, Deboğa, Lorenzo and most of all, to the unions.

In friendship and solidarity.