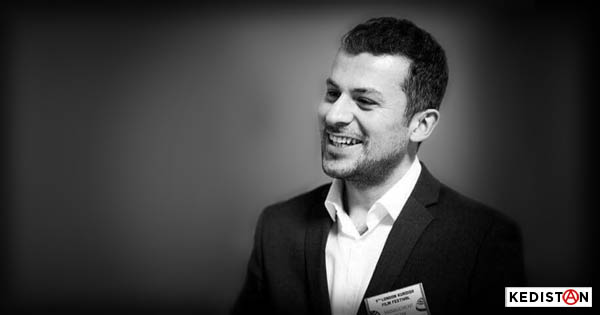 Memed Aksoy, a Kurdo-British film-maker died in Raqqa, victim of an attack by ISIS that also killed a Kurdish journalist and fighters.

At 32, he paid with his life a commitment that gave meaning to his existence and had led him to journalism, a tireless activism for the Kurdish cause, and had made him a stalwart defender of the process underway in Rojava.

Like so many others who fled to Europe, forced into exile as victims of the Turkish army’s exactions, his family had taken refuge in London in the nineties. He was ten years old, of an age to understand and to remember the theft of his childhood.

He studied journalism and cinema in England. He was the co-founder of the London Kurdish Film Festival, the founder and editor-in-chief of the precious website Kurdish Question.

Memed went to Raqqa last July 22 to join the Press service of the Kurdish People’s Protection Units (YPG). All summer long he filmed the fighting in and around Raqqa. His reports were relayed via social media. They provided a precious source of information for those journalists in Great Britain and elsewhere who were intent on obtaining other information than the cut-and-paste versions from official news agencies.

His brutal death at the hands of ISIS while using those only weapons that were his, makes him the fifth British volunteer “fighter” to lose his life in the confrontations.

Yet outside the alternative media, almost no headlines mention the death of this journalist, save for some English-language publications such as The Telegraph, The Guardian.

In a similar fashion, if a “known” French journalist had not met a French volunteer shortly before his second departure for Northern Syria, no one would have known of his existence …nor of his death against ISIS.

On Kedistan we have relayed as “Ordinary Chronicles from the Front” notes and writings of volunteer foreign fighters with the YPG. We have also opened our pages to other “fighters” with a more “civilian” stance.

Until Eutelsat’s refusal to broadcast its programs and its subsequent “move”, we also had a partnership with the French edition of Ronahi TV that gathered its sources from journalists present alongside the fighters, as was Memed Aksoy.

Because the topic “sells”, the mainstream medias over here talk about the Djihadists who have left from various parts of Europe to join ISIS, without insisting too heavily so as not to foster “callings”. But the topic is always present in a TV studio or when a bookseller is invited to ratchet up the fear factor as justification for a state of emergency…

When Loup Bureau was taken hostage, these medias suddenly discovered there were young people who, because of a need to understand or to exorcise the unnamable, also chose to leave, motivated most often by a desire to testify, document and support with their skills those the coalition would like to use as “foot soldiers”, the very ones the coalition’s leaders acknowledge as “the best fighters against ISIS.”

The forces within the North Syrian Confederation are not fooled by the attentions bestowed on them by the “coalition”. They know full well that the Syrian Democratic Forces have a vital need of them to defend their populations from the hideous beast called ISIS, and that for this reason, they need logistical aid, weapons and support. Kurdish pragmatism is at work, even if it is occasionally branded as “treason” by revolutionary purists who hold forth within their factions…

But it isn’t because the coalition “makes use” of this vital defensive need against ISIS in its attempt at eliminating the “cancer”, that it sees with a benevolent eye the dissemination of information on the reality of this fight and, most of all, on the future of the local populations for which the struggle is carried out.

For a time, some preferred to show “uniformed fashion cartoons” rather than put forth the role played by women; then, preference was given to the war spectacle…while keeping mum on the two-year old war within Turkish borders, against the Kurds once again…

On this topic, we should also recall that in 2016, a famous journalists’ association “forgot” the name of Zehra Doğan and of other Kurdish journalists in Turkey (because they were not card-carrying members of the profession) despite the fact that these forgotten journalists had constantly called attention to the massacres and destructions ongoing since mid-2015 in localities within the Turkish area of Kurdistan. Luckily, the P24 platform went beyond “accidental omissions” that are often coverups for national political divisions within the opposition, for one, and touch upon the distinction maintained between “official journalism” and non “objective” journalism…

No one can predict the future of the ongoing process in Rojava and beyond it. It is hard to think out in detail the after-Raqqa, although the process of regional and international alliances is beginning to loom in threatening shadows. The Kurdish movement is aware of this. More than ever, it will need support in its intentions and in its will for the future.

To this purpose, journalists with or without press cards, acknowledged by their peers or not, play an essential role.
How do you think Kedistan finds its sources?

They do not write from agency reports but from the realities they live and document. And if they are often blamed by permanent correspondents in Turkey or elsewhere of endangering journalists because they take risks their agencies are not willing to cover, we think they deserve to be honored instead of covered over in ignorant silence when they die.

Let there be no misunderstanding, however : the purpose here is not to oppose “real” or “false” journalists, real press vs entertainment and communications, in order to stand with the “good guys”. The point is much less simplistic. And cannot be covered in three lines, especially when it comes to the Middle East and all the political stakes underlying its wars.

Kedistan joins in the tribute paid to Memed Aksoy by the different “Kurdish Centers” in Europe and calls on the journalists’ unions to break the wall of silence around the grave of one of their own, a silence maintained by their colleagues in their respect for a sacralized “objectivity”.