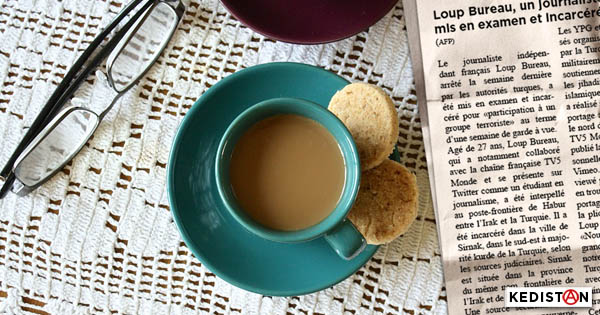 Here you are, impatient for the liberation of a journalist our media defines as a terrorist. Are you as impatient that he bring you news of our country, Turkey ?

We haven’t had any such news ourselves for over a year and, more specifically from this region where he was taken and where Kurds live in the majority with, apparently, « conflict between Turkish armed forces and PKK rebels. » Isn’t that how your media in Europe talk of the dead, and the destructions caused by the armed nationalistic bands of the Turkish State ?

I seem to understand that this journalist had a sharper outlook on this. Are you in such a hurry that he inform you ?

As for news of our country, Turkey, what do you do with it most of the time ?

Great shows of « Ah, and they want to be part of Europe ! » or « That great lay Muslim democracy was so fine before », and the best for dessert : « Turkey remains an indispensable partner and must respect its agreements », when speaking of the refugee parking lot at the eastern entrance to the Europe Store …

Yes, you don’t make much of « news from Turkey » most of the time, except on Sundays and on holidays. That jailings be carried out by truckloads, that women be beaten and raped more than occasionally, no matter what clothes they’re wearing, that « minorities » be eliminated in the name of the past even though they wish to live on, that hunger strikers be left to die for demanding their jobs back, that Turkish tanks cross the border to play police force in Syria… All that doesn’t seem to interest too many people, other than « specialists » or authors of « international columns » mandatory for any self-respecting media.

So, why this impatience for the return of a journalist whose work is probably ignored by editors, except if there’s a scoop or something sensational in sight ? Those Kurdish women are sexy, aren’t they ?

You know, we can keep him for a good while if he bothers you…

Because, face it, his timing is off. The French have a brand new President, a brand new political majority, and a brand new opposition too. And you would disturb all this national policy because of a little « freelance » journalist who will ask you to lift your eyes away from European navel gazing ? No, you can’t be serious ?

Or is this a way to show, once again, that when it comes to « human rights » and « freedom of expression », you are the world champions and that us, Middle Easterners, have a lot to learn?

Already when your cement makers and mixers, thanks to our Reis, show us every day that the « new Turkey » is rising thanks to them, we are filled with wonder at this « human progress ».

Yes, truly, your impatience at pocketing the benefits of human cooperation goes straight to our hearts. You do so much for our Turkish politicians that we will never be able to keep enough war refugees to thank you.

So think, why are you so keen for the liberation of this “journalist” ? Simply because he’s a “journalist” ??? Because you really think our Reis is only angry at “journalists” ? Yet we know a whole lot of them he loves over here… And there are some he tolerates quite well in Europe when they remain « objective » and place on a same footing the regime and its opponents, or when they practice « selective silence ». Do you really think the boy went to Syria to take pictures of rocks ? And that he insisted on seeing Kurdistan again to do his shopping ? I think he went there rather to seek out information usually hidden from us…

The brand new French President will seek light from his lantern during his holidays [translator’s note : La Lanterne is the name of the official French Presidential retreat.] I read it in your papers. Good for him, if it sheds light for him on our dark night.

Good for him if, between two protocols, he deigns to send his Consul visit a “terrorist” in prison.

Because that boy is going to need a great deal of help.

When we say that Dame Merkel did not manage to have a German-Turkish journalist liberated, we tell ourselves that, maybe the President of France will try another method.

He should scowl and, « at the same time » [translator’s note : one of the French President’s favorite expressions], offer a rebate on the Istanbul metro construction site, via his Vinci enterprise. Those things are done, between “partners”…

That said, beyond the « gazettes », there won’t be need of impatience so much as of constancy and persistence.

Beyond the 160 journalists locked up in Turkey, an entire country is dying of its divisions and of the political cowardice of Human Rights Europeans. And a young and passionate young man by the name of Loup Bureau, even with eyes wide open, fell into the trap anyway… So that he could keep you informed.

I saw also that your medias talked about Amnesty International Turkey for two weeks, while it made for sales…I’m afraid it will be the same thing for this young journalist, so impatient are they to move on to something else.

Yet it is a joy to see when the « world of journalists » imposes publication and distribution a bit everywhere to its media outlets. And that puts me to the lie, so much the better ! But don’t forget us either ! We have to live here, in this damned country under democratic dictatorship…

So, French people, before your President goes on holidays, you will have to make a lot of noise under his windows, and not just hope that he reads an impatient Figaro.

Be indulgent with the irony of an old Turkish woman who no longer expects anything, condemned to using words in order to express her ills.