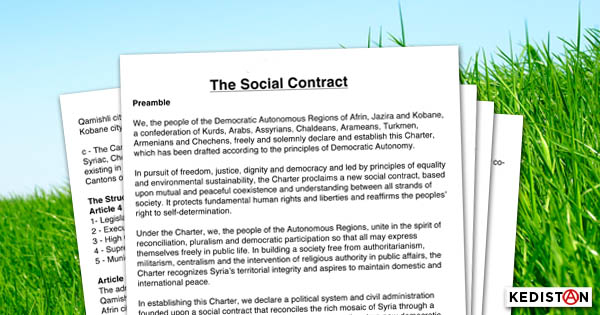 When the question is raised of a “solution for Syria” and, beyond, for all of the Middle East, the most common answer always consists in a Nation-State patterned on those exported for over a century. In the beginning of the twentieth century, this pattern had already led to straight lines drawn on maps with rulers, treaties, territorial divvying up under the patronage of colonizing imperalisms, contributing to the dismantling of the Ottoman Empire. There even existed a « Kurdistan on the maps ».

A century later, the crisis of the centralized Nation-State built on a dominant national identity, often of an ethnic character, is patent.

It is at the very root of all the wars that have haunted the region for the past century. We might even consider it was the condition, or at least the useful tool, for the maintenance of external dominance over fossile wealth and its exploitation. Which is why, however the divisions and shares may be divvied up for a better rule, a new peace solution based on the triumphs of nationalism would only set conditions for another century-long cycle of wars.

This essential reflection on Nation-States concerns us all, as much as it does the Middle-East. It even offers a solution for a bigoted and exclusive Turkey with its genocidal policy against the peoples in its demographic mosaic.

In the midst of war itself, the populations of Rojava have chosen to renounce this war-inducing pattern. They propose a political solution that allows an escape upward, and have begun applying it to their own situation. This is one of the teachings proposed by the ongoing process in Rojava (in Northern Syria) and which forms the basis for its constitution.

We had not published this chart in this format before. It is now done.

The English version is available HERE