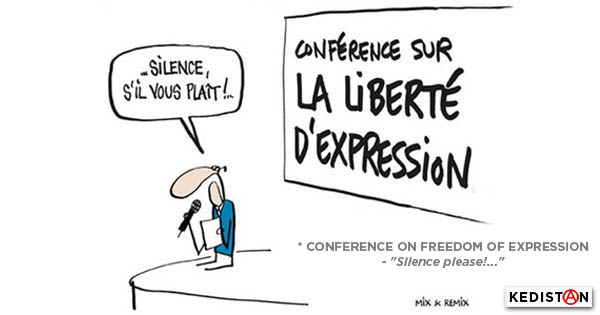 Here is the list of journalists imprisoned in Turkish jails as of August 9th (source : “Media monitoring” on the P24 platform, updated on a regular basis.) Loup Bureau appears on the list since his arrest, with 163 others.

Therefore there are 164 journalists in jail as of today.

This video done in February 2017 is but a pale reflection of the global situation.

Political postages in Turkey (in French)

Platform P24 is the source every journalist with a close or distant look on Turkey needs to consult on a regular basis. It is published in Turkish and in English.

If their numbers differ from those of other international organizations devoted to the defense of journalists, it is because the incessant ballet of arrested ones awaiting trial and of those released on parole then re-imprisoned, does not always allow total clarity, given the willful disinformation practiced in Turkey. The situation is even worse for activists or political figures from the democratic opposition.

It also happens that distinctions are made between « official » press card holders and non official journalists. Knowing that the Turkish regime suppresses professional accreditations, as it often does for Kurds, this distinction does not hold. In 2016 for instance, our friend Zehra Doğan’s name did not appear on the international lists of journalists in need of support, and several others were in her situation. It also happens that « domestic » distinctions drawn in Turkey for « nationalistic » purposes, intervene even in the midst of calls to solidarity… Many resident « foreign » journalists fear they will not recover official permission to work in-country. The regime maintains a permanent threat over them, conducive to self-censorship.

This is why this platform, founded by Turkish journalist and writer Hasan Cemal strikes us as indispensable, first of all for all members of the profession, and beyond that, for those organizing trans-national support activities. While hoping for their sake they will not find their own names added to the list some day.

They are all the regime’s political hostages.

They are the object of diplomatic manipulations for some, and of domestic policy for others. And one must read again the defense presented recently before the court by an upright Ahmet Şık, to understand that kneeling before this regime is the worse way to behave and would show a serious misunderstanding of its profound nature.

To defend them, we must leave diplomacy to the diplomats, political cunning to the politicians, legal arguments to the lawyers seriously struggling before tribunals of injustice.

These same lawyers being themselves subjected to arrests and custody. Given the impossibility of barring lawyers entirely from the proceedings, instructions based on judiciary quibbling relative to the Penal Code are being presented by the regime at the moment as dissuasive arguments against interventions by defense lawyers whose clients are charged with “terrorism”… Representing such a client would place them under threat of professional bans of up to two years.

The announced transfer of French journalist Loup Bureau to another prison (in Van), cutting him off from his lawyer and disorganizing his defense is yet another illustration of this policy of distancing defendants from lawyers.

So it is best to understand the nature of this regime before confronting it and demanding the liberation of a journalist. The German government found this out in the case of Deniz Yücel, an editor at Die Welt, still imprisoned in Turkey.

A campaign is underway in France and in Europe to obtain Loup Bureau’s liberation, charged with intelligence with terrorists because, notably, of the time he spent with the YPG/YPJ forces in Rojava, from which he produced a documentary for French TV5.

It is perfectly obvious that Loup Bureau did not go to Syria, to Rojava, to film stones and that he was well aware of the pressing need for on-site information, other than the flood of anti-Kurdish propaganda at one end, and the angelic covering by a certain « feminine » press keen on prettifying death in the « girls’ war ». Because we constantly attempt to do this, we well understand his choices and his motives. And his colleagues should absorb this notion when they express their support. His choice to go back to the area is a choice of continuity and persistence…

It is clearly a political stance, not just one of « human rights » but one that is both ethical and humanistic in its dealings with a war-mongering Turkish regime’s murders and exactions against more than half of its population, thus advising its minorities of their scheduled eradication. Signaling the Turkish regime’s role as war-mongerer even in Syria is part of the full information journalists must provide, just as journalists now imprisoned revealed how the Turkish regime acted in cahoots with ISIS and djihadism…

And please, let’s not hear pronouncements from lofty ones in journalism schools of an « isolated » case resulting for a beginning freelancer’s mistake. If that were the case, how could we explain the case of Turkish journalist and writer Hamza Yalçın, who is anything but a beginner, and who is detained in Spain since August 3rd, following an international warrant launched by Turkey ?

Is it considered vulgar to say that the simple fact of testifying against this constitutes a political act ? Answering in the affirmative totally legitimizes the accusation of terrorism against him, by renouncing to defend the human values inspiring his actions.

It would be surprising if the « Stockholm syndrome » came into play in the defense of Loup Bureau by some media and some of his colleagues. Do they fear that in this indispensable solidarity they will have to dig below ready-made opinions concerning Turkey, opinions now relayed for decades ?

Of course it is still difficult to get a reading on Franco-Turkish relations in the new French political configuration. There was the recent case of Mathias Depardon, that was more in the nature of a thorn in the government’s side and yet dragged on for a long time. We do not know if his liberation came about because of « diplomatic efforts » or because of a total absence of evidence allowing the production of an indictment of some domestic use in Turkey…Perhaps it was a combination of both. And that is why we can be somewhat wary of the « promises » made at the time by diplomats…

The ransom of silence…

But on the contrary and precisely for these reasons, defending political hostages, imprisoned journalists, by doing one’s job of informing, is a way to show Europe the true face of this regime, and to denounce the permanent Munichs playing out.

And there’s no dearth of topics to choose from… Among others, at random, the slow death promised to NURİYE ET SEMİH on hunger strike for 157 days and thrown in jail… No, this is not jumping from one topic to another…

Journalism is not a crime.