An Advance for Rojava • A New District : Shahba 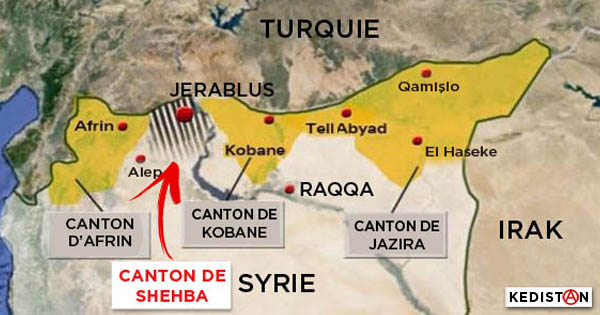 The Democratic Federation of Northern Syria has grown thanks to the addition of a new district : Shahba. This is major news.

Major news even if the time has not yet come when the three districts of Afrin, Kobanê and Djezireh will be united, because of the presence of Turkish tanks on parts of the territory, the region of Idlib being a fiefdom for all the armed factions that have evacuated Aleppo and more southern sectors recently.

These factions, partially regrouped under the name of Free Syrian army, supported by the Turkish regime and the “coalition”, no longer have much in common with the 2011 Syrian revolution.

Since Turkish tanks burst into the area via Jarablus with the aim of imposing, if not a direct Turkish presence at the very least an administration by its accomplices, there have been incessant attacks against these territories (the latest occurred in the District of Kobanê).

In the zones from which ISIS has retreated, the Turkish army’s back-up troops haven’t stopped imposing an exodus on « unsubdued » populations, mainly Kurdish speakers, using the same methods of cultural destruction as in Turkish Kurdistan.

Declaring this new district is thus a way to officialize the Syrian Democratic Forces’ (SDF) intention to drive out the Turkish army’s back-up troops and tanks sooner or later from a border region they should not be occupying. It represents the communication counter-offensive to the AKP regime’s designs for a shadowy occupation of the so-called « buffer zone ». It is also a signal that, with Rakka’s probable total fall and a wider defeat of ISIS in the region, the SDF no longer fear attacks from the rear by the Turkish State, and could well be on the offensive in the coming months.

It is unimaginable that this could happen without Russia and the United States looking the other way, while forcing Erdoğan to renounce his ambitions in the current discussions in Iran. There is necessarily a bout of diplomatic arm-wrestling going on, in which the Democratic Federation of Northern Syira is playing its own hand so as not to fall as a collateral victim in all the ongoing regional and imperialistic blackmail.

But Idlib has become a powder keg into which have flowed all the contradictions in the Syrian civil war, disfiguring the Syrian revolution since Alep’s bloody reclaiming by Bachar’s regime.

Now, a map is on the table. Under close observation for the future of “Rojava”, now the Democratic Federation.

Here is a summary of opinions found in unaligned Turkish medias…

In March 2016, the Kurds of Syria announced the foundation of the Democratic Federation of Northern Syria comprised of three districts, Afrin, Kobanê and Djezireh.

Following a decision reached on August 6th, a new district was officially announced on August 8th at the meeting held before the Federation’s Administrative Council, the Shahba Coordination team, the entire Committee as well as the Co-presidents of the municipal councils. This district lies in the zone between Afrin and Kobanê, west of the Euphrates. This zone also includes Manbij, Jarablus, Azaz and Al-Rai, from where, under the guise of fighting ISIS, Turkey carries out attacks with the Free Syrian Army against the Syrian Democratic Forces (SDF) – the Turkish offensive known as « Operation Euphrates Shield ».

Announcing the creation of a district in a zone Turkey describes as «West of the Euphrates, our red line » can fill the void between Afrin and Kobanê and allow to effect a junction of the districts.