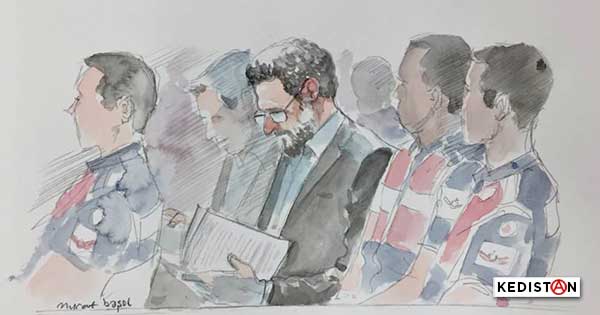 The inquest into the so-called “Gezi Park” case accelerated at the time of the arrest of businessman and philanthropist Osman Kavala, on October 18 2017. During the first year of his imprisonment, in November 2018, the second wave of arrests occurred. Most of the people held in custody were then liberated except for Yiğit Aksakoğlu, staff member of a civilian association and Osman Kavala.

In February 2019, when the inquest was considered complete and the accusation was announced, Osman Kavala had already been jailed for approximately 500 days… Following the production of the accusation, the number of “suspects” amounted to 16.

The first hearing was held on June 24th and 25th 2019 in Silivri. Osman Kavala had been in jail for 20 months. Yiğit Aksakoğlu was freed. The judge presiding the group of judges suggested Kavala been assigned to house arrest. The majority of the judges refused.

To this day, there have been 6 hearings. On Tuesday February 18 2020, a 7th hearing will take place in the tribunal hall of the Silivri campus.

Who are the accused?

What are the accusations?

“Attempted overthrow of the government of the Republic of Turkey”, “damage to public property”, “possession or circulation of hazardous materials”, “deterioration of cemeteries”, “violation of the law on firearms”, “looting”, “injuries to others”, “violation of the Law on the protection of cultural entities and natural spaces”.

When you know the reasons that set off the Gezi movement, these accusations look like a joke…
For greater detail read: Istanbul 2013 • Gezi.

The indictment is based on the report prepared in 2013 by the Directorate fighting contraband and organized crimes (KOM), at a time when the Gezi movement was still ongoing.

In summary, the report advises that Açık Toplum Vakfı (which one can translate as the Foundation for an Open Society, with no relationship with Soros) of which Osman Kavala is a member “would appear to be close to the Open Society Foundations linked to George Soros” and purports to show that this institute launched rebellions in a number of countries. It adds that Mehmet Ali Alabora, a comedian and actor, was in Egypt at the same time as Ivan Marovic, an activist in civil disobedience. Thus the report claims that Alabora, by staging the play Mi Minor wished to incite the people to rebel. The prosecutor built the accusation on this report and accuses Osman Kavala of financing the protests and actions which took place in 80 towns, involving millions of people!

For Osman Kavala, now incarcerated for 840 days: there is no evidence of the presumed financing of the protests. But it is specified that he sent cakes, sandwiches, tables and plastic chairs to Gezi Park. Which Kavala readily admits. The other “evidence” consists of phone conversations, messages and his trips abroad…

For those on probation: evidence was searched for on Twitter, in press releases, lawyers’ services, participation in non-violent meetings. Peaceful protests were considered to constitute criminal actions, for example “the man who plays the piano”, or “the standing man” or yet again “the Earth tables” which consisted of collective street meals during Ramadan…

Why is Osman Kavala still in jail?

Kavala presented an individual request to the Constitutional Tribunal but his request was turned down. He then turned toward the European Court of Human Rights (ECHR). On December 10 2019, the latter ruled that Kavala’s incarceration violated his rights and demanded his immediate release. But he was not released. At the hearing on December 25 2019, his lawyers once again requested his liberation but the judge refused considering that “the ECHR decision was not yet definite”.

As a reminder, the sentence requested against Osman Kavala, Mücella Yapıcı and Yiğit Aksakoğlu is that of “aggravated perpetuity”, meaning a real term of lifetime imprisonment, as a substitute for the death sentence abolished in Turkey in 2002. And the other 6 defendants face up to 20 years in prison.

A change of judges?

Also noteworthy: a change of judges in mid-trial. The earlier judges who were favorable to house arrest were removed from the trial while those who favored Kavala’s ongoing incarceration were favored.

The Gezi inquest was launched by Prosecutor Muammer Akkas, currently sought for because of his belonging to preacher Gülen’s Brotherhood. The decisions concerning the wiretappings and physical raids were taken by judges who were then fired and arrested following the attempted coup. These issues were raised by the lawyers. The prosecutor considered that “all the evidence and transcriptions of the wiretappings were reconsidered and any influence by the organization (meaning the “Brotherhood”) was deleted.”

The case contains no other evidence beside the transcripts. As mentioned above, the entire indictment rests on the KOM report. It was prepared by the director of KOM, then director of security, Mehmet Yeşilkaya who, following the attempt coup was also arrested. His successor, Nazmi Ardıç who completed the report, was also arrested later.

What will happen on February 18?

This will be the 7th hearing in the trial. The accused will present their defense. It is expected that the tribunal will hand down its verdict.

It is now obvious that the second wave of judges assigned to this file have accelerated the process. According to the lawyers, the reason for this is an attempt to confirm Kavala’s status as that of “condemned”, thus rendering inapliccable the decision concerning the violation of his rights, rendered by the ECHR concerning his detention. If this is what happens, Osman Kavala would be forced to begin his individual procedures anew, first before the Constitutional Tribunal, then again before the ECHR .

All the elements of Turkey’s nationalist stench are gathered here. The popular uprising in Gezi that spread to the entire country destabilized the regime, and raised hopes for a time, hopes that were rapidly and harshly repressed. Judging this political moment from the angle of a foreign plot and designating as the guilty party a defendor of Armenian cultural heritage ( among others), and a promoter of cultural diversity, is a way of pointing toward an external and an interior enemy of Turkey, “an indivisible nation/republic”. The great classics of nationalism are all gathered. They consist of the canons of the power’s defense, directly streaming from the ideological argument justifying the massacre of Armenians in the beginning of the 20th century and that must be called by its proper name, that of the “Armenian genocide”.

Thus, passing judgment on “Gezi” and including it among “past and current foreign plots against the Turkish Nation” becomes an obsession, the same as the current obsessional ethnic cleansing against the Kurds. The regime would thus reinforce its theme of Turkishness, adressed to the people it is deliberately attempting to dumb down.

The court has just announced its verdict, acquitting all the defendants who were present at the trial of all charges and ordering the release of Osman Kavala. Case files of defendants who are abroad will be separated.

The Istanbul prosecutor has just ordered the detention of Osman Kavala, this time in connection with the investigation about the failed coup of 2016 in Turkey. Acquitted on February 18, 2020 in the Gezi trial after more than 2 years in prison, Kavala is therefore not released. The nightmare continues!

Illustration: Drawing by Osman Başol during the hearing on June 23 2019