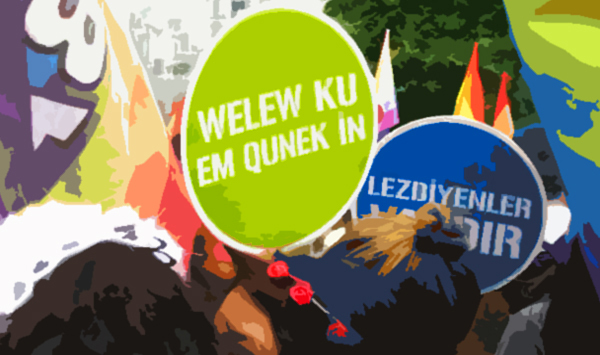 Türkçe | Français | English
To read the other articles of this file, follow this link

“Freedom is whatever we understand it to be. This is to say it doesn’t have an existence of its own. For instance, a tree has an existence independent from our perception of it. Yet freedom is a social phenomenon that cannot extend beyond our understanding of it.”
Emrah Günok, Duvar 2018

Much as the “Kurdish problem” serves as a litmus test for those who call themselves democratic, liberal, socialist, communist and anarchist in Turkey, the approach towards the LGBTQI+ proves a similar challenge for those calling for a universal humanism and claiming that î Those who announced in the beginning of the 20th century  that “we don’t need capitalism, we will build another world where everyone will be free and happy”, have disappeared unfortunately, because they have turned into the very systems they opposed. Another fundamental reason for their downfall was their unresolved  problems around the hetero-normative/patriarchal construct of gender in modern times.. (source)

In our time, Western society began its process of emancipation especially with the generation of ’68, and further evolved through women’s and LGBTQI+ movements. With this transformation, individuals’ claims  were legitimized on matters of identity, gender, sexual orientation and cultural identity replacing definitions imposed by authorities. Unfortunately, this has not been the case in the Middle East. Identity and belonging continue to be the primary reasons feeding conflicts, violence and war. Despite the seriousness of the situation when I talk about this to a socialist, a democrat or an opponent from Turkey or Kurdistan, the conversation leads to statements such as: “But my friend! Is this really the time for it?”; “Comrade, of course, we know what you’re saying, but the capitalist imperialist system is on the attack, they’re hitting strongly on identity topics, wouldn’t this LGBTQI+ business serve to divide the socialist struggle?”

While identity and belonging remain bitter topics in the Middle East, the Kurdish Freedom Movement has achieved a social, cultural and political revolution in the name of and with the participation of revolutionary Kurdish women. This is a fact accepted by all who approach life from the perspective of freedom struggles. The following analysis about socialism which succeeded through a century long tradition is important: “The theory of democratic modernity and democratic socialism were developed through the critique of real socialism. No one believes that the State and socialism can exist together. Which means that State socialism disappeared. It has been clear for everyone that equality and the principles of sharing in socialism based on freedom and diversity cannot be achieved through force and oppression as practiced by a State. The disintegration of socialism based on a State intermediary is an important development.” (source)

The Kurdish Freedom Movement reestablished both discourse and action through its democratic nation paradigm, by removing the constructs of religious belief and ethnic background as legitimizing conflict, violence and war in the Middle East. By integrating gender liberalism and ecology in its democratic nation paradigm, it expressed its utmost goal of being a pluralist, egalitarian, liberalist and democratic confederalism. Seeing this, regional racist and militarist systems became agitated, seeing the magnificent transformation that could be achieved with such political and ideological motivators in all fields of life in the Middle East.

The movement served as an ideological source while raising the morale of individuals, parties, institutions and all groups championing labor and freedom in their struggle against misogynistic and anti-LGBTQI+ structures hostile to diversity in belief systems and cultures, such as ISIL. Socialist, anarchist, LGBTQI+ individuals from many countries around the world joined in this struggle when they saw that “another word/life” was possible through the Rojava Revolution incorporating the Kurdish revolutionary women. They continue to serve in this struggle by sharing, organizing and discussing hat they have learned from their experiences of Rojava, in different cities around the world.

In the Rojava Constitution – the most liberal and inclusive constitution in the Middle East  – “gender inequality” serves to explain biased behaviors, attitudes and perceptions imposed upon individuals according to their gender. The constitution defines gender inequality throough gender systems established around mand and woman; “Gender binary translates into multidimensional inequalities in everyday life. Gender inequality is based on experimental bases or emerges from socially accepted privileges.”

Why then are LGBTQI+ members who are active in this struggle absent from this ideological political perspective? Gender inequality has been established through the binary notion of woman and man, taking into account none except the two-gender constructs, and it has resulted in violence, conflict and war. Isn’t the political line apparently standing in opposition to this system falling into the trap of reproducing the system it opposes the the binary gender discourse identified above within the women’s liberation paradigm? Doesn’t a system aiming to eliminate the danger of resembling its opponent – as did the socialist revolutions in the 20th century – need to demand freedom for all, no matter what gender, sexual identity and/or orientation they may have, without any if’s but’s or maybe’s?

Today, violence and oppression over LGBTQI+ individuals are stronger than ever. During its control over the region, ISIL persecuted LGBTQI+ individuals by throwing them of buildings. In a context where the head of the Turkish Republic says: “There is no such thing as LGBT, this is a national and moral country”, he invites violence and lynching against these people. A racist/fascist climate in which, Dogu Perinçek 1Turkish politician, doctor of law. In 1969, he founded an illegal Party, the Revolutionary Workers and Peasants Party of Turkey (TIIKP), a party with a Maoist tendency. He then became the President of the Workers and Peasant of Turkey Party  (TIKP) from 1978 to 1980, of the Sociality Party (SP) from 1991 to 1992 eand of the Workers Party (IP) from 1992 to 2015. Since 2015 he has been president of the Patriotic Party (Vatan Partisi). He was also a member of the Talat Pasha Committee, an organization that denies the Armenian genocide. in an expression of an eclipse of reasoning powers: “In the globalization process of the USA, after the 1980s, Turkish society has seen imposed upon it sectarian ethnic identities along with drugs, prostitution, suicides and homosexuality.”

Around the world, individuals and groups who grow in their struggle by standing with the Kurdish people against the capitalist/patriarchal system expect the correct perspective the Kurdish Freedom Movement’s discourse and attitude would embody around the democratically modern theory. In every corner of Kurdistan LGBTQI+ individuals suffer from oppression and violence, not only at the hands of established systems, but also in their own families, social and political entourage. How much longer will the right to life of these people be undermined, who are destroyed by violence and assassinated by parents who claim “I’m Kurdish, I’m a revolutionary, I’m a socialist”? I will  tackle this issue in my next article through LGBTQI+ individuals’ appeals to the Bar Association of Diyarbakır.

Isn’t it time that Turkey’s Socialist Movement accept LGBTQI+ comrades that stand by them in streets struggles –Gezi rebellion/Boğaziçi resistance… etc.- as subjects of life and struggle in all fields of life and adopt a discourse and practice accordingly?

To read the other articles of this file, follow this link