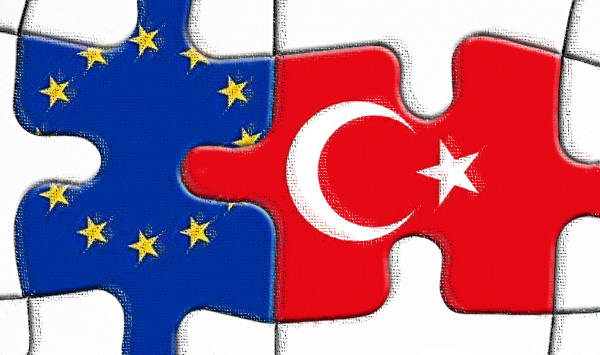 We are translating this article because it seems most relevant to us in explaining why authorities in a good number of European States no longer hesitate in expelling Kurdish militants to Turkey, or in opposing the sheltering them under the right of asylum, via prefectures in France, for example, when they are persecuted by the regime in Turkey, with all the evidence for such being provided.

These cases have been on the upsurge recently.

The EU regularly renews its wishes for  “good relations” with Turkey and renews at each expiry date the agreement on “migrants” along with its financial payments. The fact the Turkish regime does not follow through on demands from the European Court of Human Rights (ECHR) to release Selahattin Demirtaş or Osman Kavala does not affect good bilateral relations in the least, and notably on matters of international policing concerning opponents to the Erdoğan regime.  Under cover of agreements on migration, the EU thus agrees to include on its blacklists into the Schengen space names pointed out by the Turkish police. When one is aware of the fact that the headquarters for Interpol, located in Turkey, will soon be headed by an ex-torturer from the Emirates, the whole picture becomes clear. Red notices and black lists are insured of a long life…

Not content with aligning themselves on the American policy of abandoning Kurds in Syria, French authorities are zealous when it comes to refusing asylum to those fleeing war zones, and leaves them to drown in the Channel when they attempt to find better luck in England. While it holds up requests for asylum from refugees arriving from Turkey. The extreme swing to the right in French political life on matters of migration does not explain everything. A policy of police cooperation with Turkey, begun under the “socialist” presidency of François Holland, is ongoing under that of his successor with the same actors at the helm of “foreign affairs”.

More than ever then, the Kurdish diaspora in France should be wary of its false friends.

Also, the fact of maintaining the PKK on the international lists of “terrorist organisations”, after the Kurds provided military cooperation to international forces against ISIS, contributes to the excuses for anti-Kurdish repression, a constant of the Turkish State.

In the same way, “internationalists” who fought against ISIS alongside the Kurds are blacklisted and thus criminalised; meanwhile while we are still awaiting conclusions to the investigations on the crimes sponsored by Turkey in Paris, for example…

The following article describes visible aspects of these policies of police cooperation against militants currently defending fundamental causes while the EU pursues its realpolitik i.e. its sales of military material and the closing of its borders. 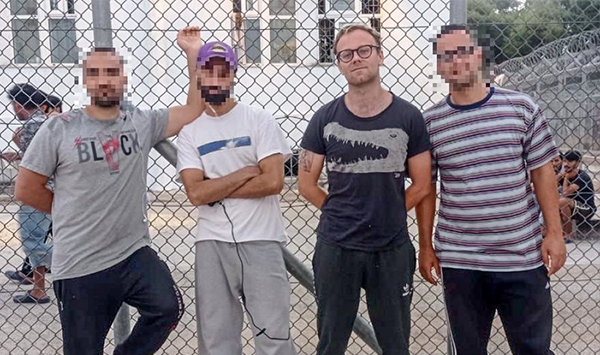 Article by Ferran Barber published in Castillian in Publico on December 18 2021.

For having supported the Kurds, Germany forbids entry of an English citizen into the Schengen space and expels a Spaniard with a 20 year prohibition on re-entry.

Militants linked to Rojava denounce the fact the German administration has included them on the black lists and that they are now subjected to reprisals. They assume Turkey is behind this persecution.

Never, not even in his worst nightmares, could he have imagined a chain of events like the one that caught up with him earlier in the year. British journalist Matt Broomfield was attempting to enter Italy from Greece when the Greek police informed him that his name had been included by Germany on the Schengen information systems, as an “undesirable person”. At Berlin’s request, the English reporter had indeed been forbidden entry into the 26 countries of the Schengen space for the next ten years. Broomfield was also immediately arrested and placed in one of the detention centers for migrants. He is the first – and so far, the only – Westerner subjected to this experience.

Broomfield’s description of these migrants’ living conditions and of his own 2-month sojourn is terrifying. The worst part, is that he does not even know why the Germans consider him an “undesirable”.  “All I was told about what happened was that I had been included by Germany in the Schengen information system”, the journalist declared to this newspaper. “We know that another British doctor who was in Rojava received an identical prohibition which confirms that the sanction inflicted on me has some relationship with my work at the Rojava Information Center.” That organisation, of which Matt is one of the founders, has been working for years with journalists worldwide, providing information on the evolution of the situation in Northern and Eastern Syria (NES), the autonomous territory controlled by the Kurds.

The fact that the Kurdish authorities governing NES spent years fighting ISIS under the banner of a coalition also including Americans and Britons themselves constitutes an almost insoluble paradox: that persons be pursued for collaborating with an administration with which they own governments were fighting hand in hand. “British judges once said, concerning other similar cases, ‘how can someone be accused of terrorism for actions committed with the support of the British Air Force itself’,” emphasises Mr. Broomfield.

“According to the law then, if a person such as myself represents a serious security threat, he or she must be included in the Schengen information systems. Obviously, I am not a threat. Almost all the ones on the lists are like me. There are hundreds of thousands of persons on these lists and most of them are simply migrants. Some States use these lists as a legal mechanism in order to expel whomever they so wish. Others use them to target human rights activists or lawyers. In Poland, for example, a Swiss-Turkish journalist, head of an NGO, was denied entry on its territory. Great Britain, Italy, Denmark, Belgium and Germany have taken measures against persons who went to Rojava or who supported the Kurdish movement. In Australia or in Denmark, going to Rojava is a crime, independently of what you did there”, Broomfield explains.

The journalist suspects Turkey sent Germany a list of names it uses in conducting its own witch hunt, a German version of McCarthy’s witch hunt. Just like the American Senator, Berlin supports its jihad against Kurdish solidarity movements, with its own updated version of the “red scare”, which, in this case, could be called the “Kurdish scare”.

“There have been six attempts in Great Britain to prosecute former members of the YPG Kurdish militia, by various legal means, but they have all failed. A boy by the name of Daniel Burke spent 18 months in prison before being released without charges”, the British journalist details. “They also attempted to charge the father of a militia man by the name of Daniel Newey for sending 150 £ to his son. They wanted to charge him with terrorism. In my case, it was never a secret that I was in the North and East of Syria, because I was often in the papers.”

More than 100 Spaniards fought or fulfilled civilian duties in Northeastern Syria. In 2015, a militia man from Galicia by the name of Arges Artiaga was indeed accused of murder but the national Court rejected the accusation. However, there is a much more recent case of persecution involving a Spanish feminist.

Maria V. Holds the unfortunate honour of being the first militant to be expelled from Germany for her explicit support to the Kurdish movement. The feminist was expelled without due process of law by German authorities, accused of serving as a link “between the radical left and the PKK (Kurdistan Workers’ Party).”

Last October, three civil officers of the police commissariat in Halle informed her of the notice from the immigration bureau in Magdeburg, demanding that she leave the country within 30 days because she had lost “her right to free circulation in Germany as a citizen of the European Union.”

By virtue of this ordinance, the internationalist will be forbidden entry into Germany for 20 days  as of the date when the decision was communicated to her. Authorities have justified their decision by the fact that Maria represents a threat for the security of the German Federal Republic. Moreover, she is accused of having remained too long in the country without family ties, employment, insurance or sources of revenue, from which it concludes that she used her time in the country “exclusively in order to participate in and organise political activities linked with the Kurdish liberation movement against Turkey.”

According to ANF, the Kurdish press agency, the document informing her of her expulsion from the country underlines the fact that, since 2014, Maria took part in assemblies, protests, demonstrations and other political events in places such as Leipzig, Magdeburg and Berlin. The Spaniard was interrogated concerning her computer knowledge and knowledge of the Kurdish language because, according to the information site, these allowed her to contribute to the constitution of a network “and to serve as a link between the radical left in Germany and the Kurdish liberation movement”. The prohibition on re-entering the country for twenty years can only be applied in cases of war crimes, crimes against humanity or terrorism, which provides the measure of the harshness of the decision. 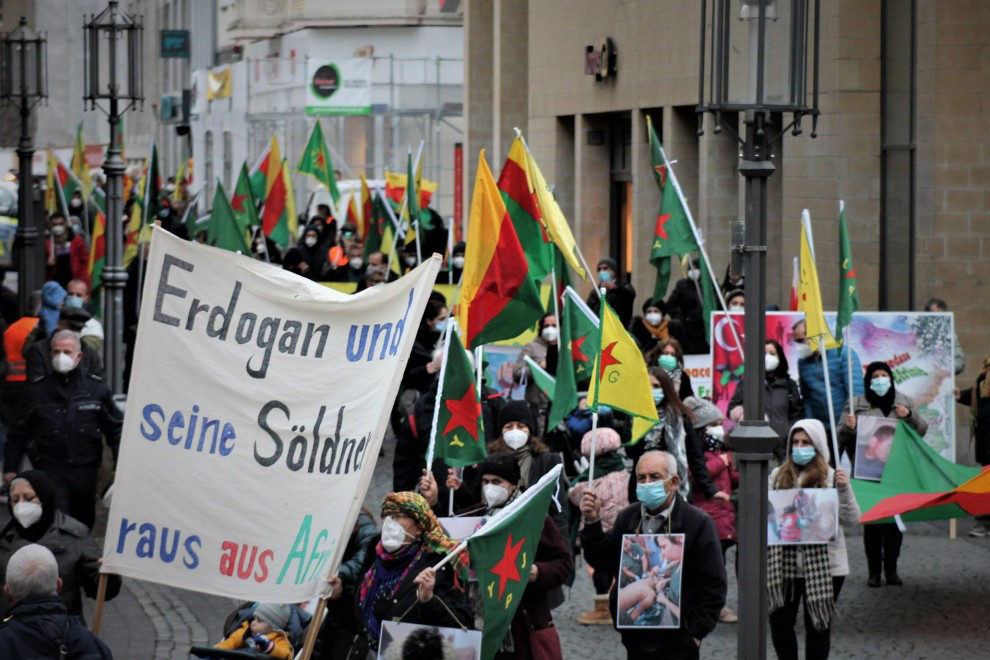 In Germany, Kurds and Europeans protest against Erdogan’s policies. Photo: Zinar Ala (CEDIDA)

The Kurds themselves consider the decision was taken to set an example. “The State is attempting to open a door to criminalising politically active persons without German passports in order to expel them at will”, declared the ANF in a communique. “All the Kurds living in Germany are suspected of terrorism because of the PKK prohibition. Attempts to criminalise the Abolish Ban initiative, calling for the decriminalisation of the PKK and a lifting of the prohibition against the PKK are yet another example.” The date of the expulsion coincided with November 26, which is also the anniversary of the PKK prohibition Maria V. has trouble believing this is nothing but a coincidence.

The expelled militant explained to ANF that she learned of this decision in October when she was summoned to police headquarters in Halle, in Saxony. “I was informed that I had 30 days to leave the country and since this period had expired, I had to leave Germany”, she declared on November 27. The Spanish feminist underlined the arbitrary character of the decision that was not reached by any tribunal or judiciary organ. “My knowledge of Kurdish and my participation in demonstrations are the excuses they provide in support of the expulsion order. Because I have no relatives in Germany, they maintain that I have been living here for years, while insinuating that it is a crime to use my knowledge and my experience to the Kurds’ benefit.”

The expulsion order makes reference also to demonstrations organised on March 8th as part of the international day for women workers and to events linked to Hambacher Forst, one of the better known environmental movements. Maria V. drew attention to the fact that this suggested there was something criminal in participating in perfectly legal and peaceful demonstrations. “Despite the fact that I never carried out any illegal activities in Germany, I was kicked out”, she declared.

The feminist, who has appealed the decision through her lawyer, is certain her expulsion is a consequence of her internationalist positions and her support for the Kurdish people’s struggle. “I want the Kurds to live free as other peoples do. And in Germany, it is thus a crime for a Spaniard to pursue such objectives and to learn the Kurdish language.”