Mezher Kartal must remain in France and free! 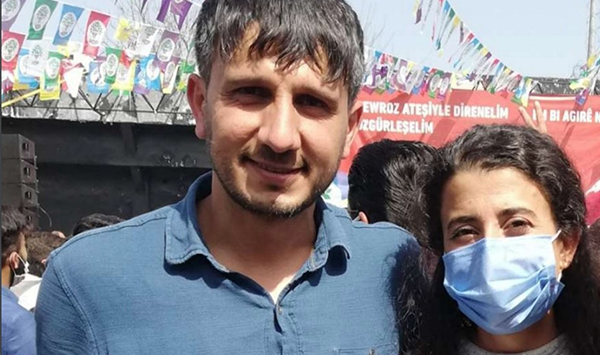 At his request, we contacted Mezher Kartal whose administrative retention in the Mesnil-Amelot (Paris) center is ongoing.

More than ever, the threat  weighs on him of an eviction toward the Turkey he fled. This threat and this absurd detention while his companion is free to move about and is scheduled to meet OFPRA soon1OFPRA: Office français des réfugiés et apatrides: French Office for the Protection of Refugees and Stateless Persons, makes no sense even in view of the right to asylum which states families cannot be separated.

Their case has already been covered in a number of newspaper articles, seized upon by associations such as MRAP 2 MRAP: Mouvement contre le racisme et pour l’amitié entre les peuples (Movement Against Racism and for Friendship between Peoples and the creation of a supporting collective acting with his lawyers. In the French context over security matters, and given all the political tensions around the right to asylum, it becomes particularly complicated to resolve even simple cases, since the persecutions in the country of origin, Turkey, can certainly not  be denied here.

In Turkey, Mezher Kartal was an active militant for the Peoples’ Democratic Party (HDP) in the city of Diyarbakır. He arrived in France with his companion Ruken on July 17 2021, requesting asylum in France. His request was rejected by OFPRA on September 16 with a judgment calling for an “obligation to leave the French territory” (OQTF).

During our phone conversation, Mezher Kartal had the following to say:

“They told us we would be liberated. But then they called me into the office and told me they were keeping me. My companion was liberated.

Since then, I am held in the administrative retention Center of Mesnil-Amelot. Every four mornings, I’m subjected to a PCR test. I know this is done in order to send me back, so I refuse. With each refusal, they add an additional 28 days to my retention. And this has been going on for almost five months.

I do not understand why my request for asylum was rejected. This negative decision was not motivated. I really don’t understand… Yet, my file clearly lays out my situation, with all required documents and evidence, even including newspaper articles.

Like many other regime opponents, I found myself before Turkish tribunals. I was first accused of “insulting President Erdoğan” for sharing something on social networks, but not only…For example, more recently, a new file labelled as “secret” was opened against me in Adana, with graver accusations based on the declarations of a “secret” witness. In fact, following this, the police bothered my family over the phone and also came knocking at their door.

My family’s story is filled with persecution. My brothers are currently in prison. My older sister Zelal was a combatant and fell a martyr. My younger sister was also taken into custody. My brother participated in the hunger strikes initiated by Leyla Güven in 2019. Even my mother was arrested with no real motive, as she was entering the  HDP offices. In fact, the police pester her because she does not keep quiet over the fate of the Kurds, and so they haul her in. They held  her for 36 hours, then released her with a prohibition against leaving the territory. My mother is a “Mother for Peace”. You know, the “Mothers for Peace” constitute a movement for women’s civil rights…Since 1999, these mothers have attempted to bring peace to Turkey through non violent means.

As for me, I was forced to leave Turkey with my companion who also has a heavy history. We came, requesting asylum in France to escape from persecution and prison. But I find myself imprisoned over here…”

Indeed, maintaining in a retention center for migrants someone whose request was rejected in the first place for reasons beyond our understanding and whose personal and family file illustrate what Kurds opposing the regime in Turkey are subjected to, is an aberration when one knows that, at the same time, persons wanted for war crimes (Rwanda for example) are circulating freely in France. This punitive concept of the right of asylum is an interpretation that matches up more with speeches currently blossoming that with the reality of European treaties. Associations supporting Mezher Kartal will turn to European jurisdictions in this regard.

“Following the rejection by OFPRA, my lawyer launched appeal proceedings that are currently active. But such recourses are not suspensive so that I am still threatened with eviction. Reservations are made regularly on planes in order to evict me, and I’m asked to take a PCR test. I refuse, so 28 days of retention are then added to my calvary.

My companion is outside, alone, in a country the language of which she does not know. I do not understand why I am not with her. She needs me because she was imprisoned and subjected to very serious matters. She still bears the psychological trauma from these events and is extremely vulnerable. Are they allowed to separate a family?

I know there have been demonstrations, articles in the newspapers, appeals to attract attention to my case. Civil society organisations, collectives, political parties have signed these appeals. But nothing budges. I am still here, under threat of eviction.

I’m now awaiting December 28, the day when I will appear once again before a Commission. My wife also has a interview with OFPRA on the same day.

We cannot return to Turkey. The minute we set foot on Turkish soil, we will be imprisoned.”

Obviously, this calendar date of December 28 would make a potentially double eviction go by unnoticed in the midst of end of year celebrations when almost everyone has their nose in a Christmas tree or in the various episodes surrounding the French presidential election. And even if both of them should win their appeal later, it would then be too late to pull them out of the Turkish gaols in which they would already find themselves.

It is thus more than urgent that the OQTF be abrogated, especially since it is not valid forever, and it cannot be renewed administratively without motive. For this, we must continue to call out the authorities without fail.

While not a day goes by without the Government of Turkey further revealing aspects of its implacable dictatorship, French authorities are about to evict Mezher Kartal toward this country where every mechanism is deployed in order to annihilate the Kurdish people, but also to crush every dissident voice not conforming to the doctrine of its President Recep Tayyip Erdoğan.

An important member of the city of Diyarbakır’s section of the Peoples’ Democratic Party (HDP), Mr. Kartal held regular activities and participated actively in  organising different electoral campaigns for the HDP. Targeted by an inquest for insulting the President, he is at risk of encountering heavy prison sentences and a violent treatment reserved to political prisoners.

Threatened and persecuted in Turkey as are their entire family for their political commitment but also for being Kurds, his two brothers are imprisoned, one of them sentenced to 22 years in prison. As a member of “The Mothers for Peace”, his mother has been arrested on a number of occasions while his wife was incarcerated for several months.

Knowing that his life was in danger, he was forced to flee his country and turn to exile in Europe with his companion. Arriving in France last July 17, his request for asylum was rejected by OFPTRA on September 16 2021 along with an OQTF (Obligation to leave France). His lawyer appealed the decision before the CNDA but this appeal is not suspensive of the OQTF. Mr. Kartal is at risk of being evicted toward Turkey at any moment, without even having the opportunity of being heard before the National Court of the right of Asylum (CNDA).

French authorities are not ignorant of the fact that Turkish tribunals are more in the nature of a masquerade than in application of   constitutional law, as part of a generalised drift of its judiciary institutions. Thus, thousands of political prisoners rot in Turkish gaols under the fallacious argument of “belonging to a terrorist organization”.

Proof of this is in the fact the Council of Europe has just launched against Turkey a procedure of infraction for failing to respect fundamental rights and refusing to liberate Mr. Osman Kavala. The committee has also demanded the immediate release of Selahattin Demirtaş.

While the suspension of the HDP Party is imminent, raids occur on a daily basis, with massive arrests, intimidations, violence against deputies, mayors, journalists, activists…: must we consider that France has decided to be an accomplice to this rogue State   by turning over to Erdoğan’s government Kurdish militants fighting for democracy and freedom?

The instrumentalization of the Kurdish people must cease, the defence of human rights cannot be a toy of variable geometry depending on political agreements and economic stakes.

The French government and its President Emmanuel Macron bear a heavy responsibility in evicting toward Turkey Mr. Mezher Kartal, when there can be not exist even a shadow of a doubt he will be arrested, tortured and subjected to the blade of a judiciary execution. Especially considering this eviction toward Turkey would constitute a violation of the European Convention of Human Rights.

We earnestly appeal to French authorities to abrogate without further delay the order of eviction and the OQTF against Mr. Kartal and to grant him and his wife  the right of asylum.

We call on political parties, elected members, organizations defending human rights and all and every person indignant over this situation to mobilise and call on French authorities to rescind this eviction which would be unworthy of France and of the values it claims to defend.