Turkey • “Better to hang them than to feed them!” 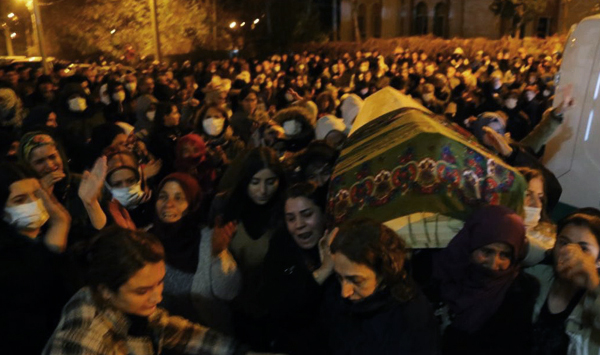 The expression blossomed today in Erdoğan’s media in Turkey: “Another terrorist fed in prison, died.” 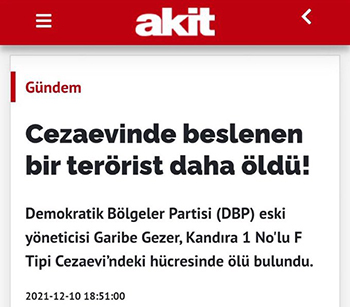 One of the rags under order from the regime, with a strong acquaintance with its ultra-nationalist wing, found it legitimate indeed, concerning the “suspicious death” of  a Kurdish prisoner, Garibe Gezer in prison, to establish a historical parallel. The headline refers to the words of Kenan Evren, the general involved in the military coup d’Etat of September 12 1980, inscribed in the country’s fascist history. Concerning Erdal Erden, a revolutionary executed by hanging on December 13 1980 at the age of 17 he declared: “We should  not hang him, but feed him, maybe?”

We can also see in it an ignoble parallel with the victims of hunger strikes.

Garibe was officially found “hanging” in her isolation cell.

This ultra-nationalistic quip, reeking of hatred, was picked up by the mob, of course. This being the backfire set up to  counter the emotion and questioning set off by the State feminicide that Garibe’s death represents. In a letter addressed to the Kurdish press, her co-detainees denounced the conditions of retention, the sexist violence in prisons, the secrecy which allows every attack and aggression, the systematic strip-searches and, concerning Garibe, her continual persecution through her transfers from one prison to another as well as in her isolation following complaints she had made of rape and sexual abuses to which she was subjected. Type F prisons in Turkey, by isolating prisoners under the pretext of “humanising and individualising” conditions of  incarceration,  become, on the contrary, places where abuse remains hidden, where arbitrary measures are put in place in order to break down any form of resistance, through the torture of isolation raised to the level of a dogma.

This semblance of carceral evolution, then used against opponents, be they Kurdish or not, becomes a weapon of repression that can lead as well to death as to the systems of torture practiced previously and which proved too visible. Concerning these, see Zehra Doğan’s graphic novel “Prison N°5”.

Garibe was buried in her native soil, despite all the obstacles encountered by her family in order to do so,  since the administrative authorities exercising the wardship, designated by the regime to replace the elected members who were dismissed by decree, refused to offer any aid or provide the slightest assistance for “ a terrorist who killed herself.”

This is how it goes with every right-wing extremism across the world.  When mentioning carceral conditions, there’s a very quick switch over from “they constantly get more attention on television” to “feeding the useless mouths of criminals”. Followed by proposals  of secure sentences, of a Guantanamo for “terrorists”, then to the re-establishment of the death penalty. Once again, Erdoğan’s ultra nationalist allies are serving as prompters by suggesting their proposals to fascists world-wide.

There’s no point either in pointing out how this nationalistic virilism is always matched with a declared adherence to patriarchy which, in the case of Garibe’s death, gives the crime the character of a State feminicide, joining the sexist crimes committed against LGBTIQ+, assimilated helter-skelter to “terrorists dividing and destroying the nation”. That language is the same everywhere.

No need either for further developments on what the weight of nationalism represents in Turkey, currently in alliance with Islamist bigots. It happens to be the same historical affiliation that prevailed in the Armenian genocide, the persecution of Jews and Roums (Greeks), that of the Kurds and the massacres of Alevis, a filiation still at work behind these media reminders.

The vile beast never misses an opportunity through historical connections  to rendez-vous with itself.