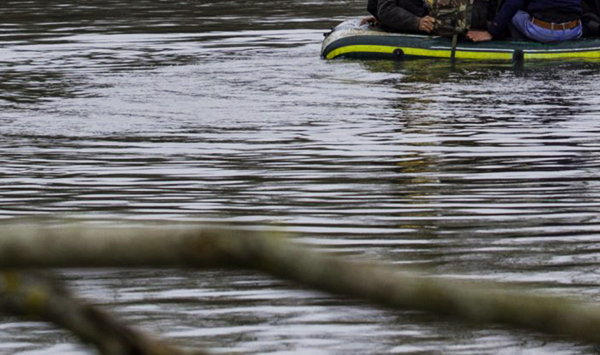 Trans­la­tion of a text that res­onates with what is hap­pen­ing on the Beloru­sian bor­ders. Here, the no man’s land is a riv­er but the men­tal­i­ty of the smug­glers, and that of the sol­diers, is the same, with mon­ey and inhu­man­i­ty serv­ing as the heart of the exploita­tion of human misery…

Despite my efforts, I didn’t man­age to wipe the wor­ry off my face when my eyes met those of Dicle who was try­ing to hold onto our bags close to her at the oth­er end of the boat — a boat even dirt­i­er than the waters of this riv­er that runs between borders.

At moments like these, I didn’t even have time to think that this effort was stu­pid. I took my eyes off Dicle and con­tin­ued strug­gling with the two oth­ers who were in the boat with us. At that moment, I saw that one of the masked men on the shore was yelling and ges­tic­u­lat­ing to those in the boat “throw them out!”. There was no need to know the masked man’s tongue. I under­stood I was about to be thrown into the riv­er. Short­ly before this, the own­er of this same voice, unable to stand the fact I was resist­ing him while he thrashed my thighs and back with the butt of his gun, had said in a lan­guage I speak “shut up, you’re gonna die!”

In a frac­tion of a sec­ond, in a burst of ener­gy, I grabbed the hand of the man in the boat, the oar turned rot­ten from spend­ing so much time in the water, and I struck him in the face. Because of thirst, hunger, fatigue, wor­ry, and the punch­es land­ing on my body short­ly before this, I couldn’t man­age to con­trol the oar well enough. With the shift­ing of the boat, the sec­ond man pan­icked. He attempt­ed to grab the oar out of my hands and throw me into the riv­er this time.

While the boat pitched and rolled, Dicle came close to falling over­board, attempt­ed to help me, but couldn’t. The man whose face I had struck, recov­ered. My whole strug­gle was anni­hi­lat­ed. He regained his bal­ance and man­aged to send me into the water. But the oar was still in my hand.

I took advan­tage of the float­ing oar and man­aged to drift toward the oth­er shore, but just for a moment. The boat moved clos­er, two hands pushed my head down into the riv­er. The oar was theirs again.

I did not know if the water was enter­ing my lungs, my nose or my mouth but the mud­dy riv­er was swal­low­ing me. How do you do the breast-stroke again? Every­thing I knew was erased. The voice say­ing “Shut up, you’re gonna die!” still sound­ed in my ears. As I went up and down in the water, the image of two chil­dren appeared.
“Mum­my, don’t give up!” they yelled.

What are they doing here? The riv­er is swal­low­ing me, I’m strug­gling. The chil­dren yell again,
“Mum­my, no, don’t leave ! Get on your back, on your back!”

What are they doing? How old are they? I throw myself on my back, in the water’s arms. Where are my mother’s arms? How angry my moth­er will be with me when the riv­er swal­lows me. I will be the third of her lost chil­dren. What is more, with­out a tomb, like my broth­er ! How many times have I lived this sen­sa­tion? This must be the final one.

My hair car­ries the whis­pers of the riv­er to my ears, while the wings of the sun look me in the eye, cry­ing. Where is this riv­er car­ry­ing me? Does the Mar­it­sa 1Riv­er in the Balkan Penin­su­la, run­ning through Bul­gar­ia before serv­ing as the fron­tier between Greece and Turkeyend up in the sea or will I be dragged through the mud? At the moment when I close my eyes, lis­ten­ing to the river’s whis­pers, the chil­dren yell again.
“Mum­my, go ahead, beat the water with your feet!”

My legs, crushed by the hits from the muz­zle and the trun­cheon have absorbed the mud from the riv­er, like sponges. How could I man­age to beat my feet? And the riv­er is busy swal­low­ing me. Am I in the process of leav­ing or of stay­ing, I don’t know. Are my feet mov­ing? I don’t know that either. My hair car­ries the voice of the water to my ears.
“There, give your­self up to me!”

I’m about to let myself go in the river’s voice, a woman’s voice finds me.
“Quick, give me your hand!”

The riv­er grabs me by the hair„ the woman by the hands. The hands of the riv­er and those of the woman are so dif­fer­ent. When my body thumps against the stones on the shore, I realise I am alive.

But how? I still can’t breathe. Every cell in my lungs has filled with the river’s dirty water. I close my two hands into a fist, I press on my stom­ach, on my diaphragm, sev­er­al times. The dirty water pours from my mouth, from my nose, with cough­ing fits that make me nau­seous, but the freer my breath­ing becomes, the more I come back to life.

Did all this last a few min­utes, or cen­turies? If truth be told, it doesn’t mat­ter, I am alive. Giv­ing myself up to the earth’s skin, I meet the eyes of a woman. Dicle. She is alive! While the sun caress­es my sod­den body, I smile at her. The smile illu­mi­nates my face. My smile is painful, but hap­py to be alive. I smile, we are alive.

From close up, sounds of shots on the oth­er shore, the sounds of cars speed­ing away. The bark­ing of dogs moves clos­er. If Lili were here, she would be miaow­ing out of fear, hid­ing between my legs.

Dicle holds my hand, and in the oth­er hand, she car­ries cloth­ing that is slight­ly humid, but not mud­dy. Those hands, those of Dicle, are so dif­fer­ent from those of the riv­er that were pulling me into the depths…

Kurdish author, born in 1980 in Diyarbakır. Her literature is known through her poems, novels and short stories. She works as an editor for magazines and publishing houses, writes lyrics and composes songs.
She is a member of Kurdish PEN, Kurdish Literary Association (Kürt Edebiyatçılar Derneği), and Kurdish Writers Association of Mesopotamia (Mezopotamya Yazarlar Derneği).
Meral Şimşek was prosecuted, and convicted for her writings, which focus on social reality. Some of her trials are still ongoing.
She has published three collections of poetry (Mülteci Düşler, Ateşe Bulut Yağdıran, İncir Karası) and a novel (Nar Lekesi). Her writings gave been translated into other languages and have received several awards: In Iraq, in 2016, the second prize and in 2017 the first prize for poetry Deniz Fırat. In 2017, the 3rd Yaşar Kemal poetry prize, in 2018, the best writer/poet prize of Diyarbakır among the “Altın Toprak” awards, in 2020, for her short stories the first prize of the Federation of Alevi Unions of Germany (AABF). The selection Comma Press in England, 2020. And in 2021, the prize for letters, Hacı Bektaş‑i Veli, awarded by UNESCO – AABF/KSK. Also in Germany, the first prize for short stories Dersim Gemeinde e V.Köln (The Massacre of Dersim).