The Vile Beast Feeds Beasts in its own Image #4 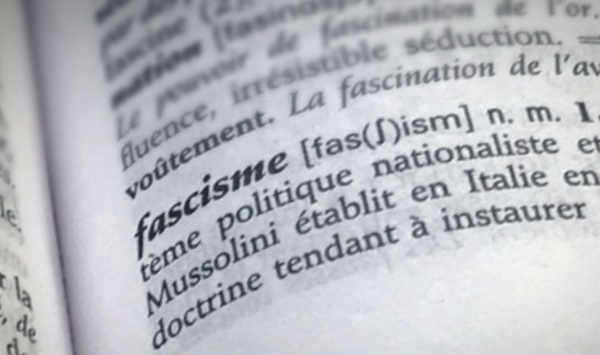 Fascism is not only a nationalist violence and the political system orchestrating it, but a full-blown ideology that always theorizes itself somewhere as a response to crises, when social tensions due to class antagonisms persisting in a system based on inequalities and discriminations can no longer be controlled by other than solutions often akin to identitarian populisms. Thus do they find themselves raised in status to take on positions of power in the full light of day, including through deviant institutions within “democracy”.

These ideological theorizations share a common matrix, power systems in abeyance that have always delved within the capitalist environment. Fascism and capitalism have thus travelled together in human history.

Capitalism, the appropriation of wealth, the highjacking of the labor producing it, the financiarization of the planet and its predation for profit, dominate and regulate global economy, subjecting to it human activities, social organizations, life environments. Power systems organize it and regulate it, along with systems devoted to the means of production and to capital. No need for further developments of what even economists defending capitalism do not question as an analytical system. What they are less anxious to develop are the difficulties generated by the inner contradictions of this economic and political system,  of which the very practicioners have never denied the obvious existence.

The capitalist organization of the human world rests both on accumulation and competition, profits drawn from labor and property, along with the competitive monopolizing of living matter and terrestrial resources required for production. Capitalists prefer to call this the “competitive market”, “the labor market” and “the economy” with no qualifier. If we look back again, we see that this economic model has always been a factor, both of economic and financial crises of its own doing, and of social crises flowing from the first, or again flowing from the obvious inequalities in the sharing of wealth and resources. Added to these now: an ecological crisis, fruit of the system’s greediness and predatory practices.

And this is where comes into play the need for complex organizations of power venues within human societies. Their range has been extensive – from feudalism to States subjected to imposed market rules, from Empires to neo-liberalism in the guise of global capitalism.  And (this Marx had only barely evoked) an out-of-control system that insists on the notion of endless growth for its benefit, as if the planet itself could endlessly grow, and thus headed for destruction. One suspects that ancient, pre-capitalist “civilizations” collapsed for the same reasons of over-reach.

In brief, societies based on accumulation, non-collective property and profit have known countless changes in order to self-perpetuate, be it through slavery or salaried labor, from exploited manpower to machines, from industrial revolution to global financiarization, all on a constant basis of hierarchical patriarchy. Each and every time humans have imagined they could control it through social and political organization. The intellectual sphere, as we call it, contributed to the collective search for solutions in order to render this system viable and unavoidable in the long term, or in order to revolutionize it.

In this case, communism is one of those alternative patterns, libertarian communism another, Nation-States provide one form, colonizations provide means, with the armed branches provided by military and economic imperialism, neoliberalism as a leaded safety belt for the weak and a means of accumulation for the rich… And, recently, “there is no alternative” was imposed for a good while by profiteers using various modes of governance.

And fascism in all that?

I think you already have the answer concerning the nature of this variant linked to the system, and the way in which, once the ideological matrix and mode of domination adapt to it, it can become a deadly escape route to exacerbated  contradictions.

And to avoid finding myself accused of dogmatic schematism, I will add that all this does not occur as in a conspiracy, as a ruse of nasty capitalists assembled in brotherhoods or conferences thinking this out each in their own corner; instead it settles in the void of thought when faced with crises, and when that same thought has failed to respond to them or has betrayed itself in the eyes of human societies.

Fascism first takes hold in the voids, then it levels out and fills all available spaces. We then find ourselves faced with Albert Camus’ words: “One tires of seeing the beast triumph without combat”.  Or when stupidity encounters “the beast”. Fascism is not the reversal of “democracy” but rather  its failure stimulating rejection, and often finding its backing in a class or social layer whose immediate interests are most severely affected. When the bourgeois owners or the oligarchies no longer show consideration for their underlings, it happens that the latter think of grabbing the house keys. And as with any populism, even if it appears to have revolutionary ambitions, since it is not anti-capitalist, the worst of “the beast” can then prosper – the “beastliness” Camus spoke about, the very one produced by human intelligence.

“The beast” Gramsci also described thus: “The old world is dying, the new world is late in appearing and in this murky half-light, the monsters appear”. Monsters that soon edict the need for order, a  firm hold on power,  safety for businesses, along with defending an identity, ancestral values, national sovereignty, all matters that reassure when faced by the void or by chaos, or on the aftermaths of  treasons and the defeat of thought systems.

The anti-system ones then put on the brown shirt, or others in more exotic hues, leagues and parties appear with banners espousing ultra-nationalism and threatening differences in a virile way, preferably as an expression of faithfulness to old, well-established patriarchy. And let’s not forget for good good measure support from bigots, be they bigots in the service of a god, or for the denial or religious thought.

Prévert’s bishop vomiting on Rome street in his poem “Crosse en l’air“1Jacques Prévert’s radical attack against the Catholic Church and religious bigotry in general in the days when “gangster Mussolini “was bombing Abyssinia (later known as Ethiopia) after “conquering” Libya, all with the blessings of the clergy., as he watched all kinds of garbage flow by in the gutter of those days (1937) already reeked of the fascism to come, along with the bad hootch he had ingurgitated.

Sister Anne, Sister Anne, what is that we hear rustling in Poland, in Hungary, already settled in Turkey and elsewhere ? Do you see nothing coming down the road?