Police and Journalism • Letter to a friend who has remained French 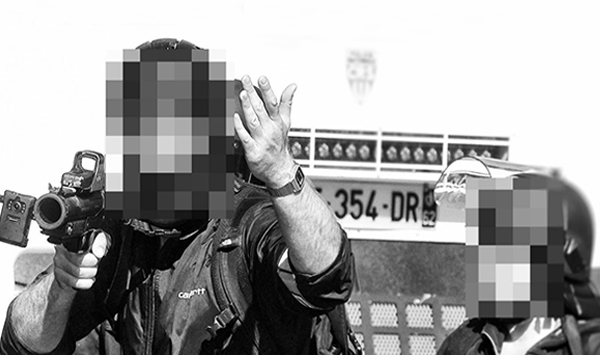 You called for the police? Don’t blur the image.

I received your Christmas present, thank you. You shouldn’t have. But you know, “Brown Morning” reminded me of something. Of another story about dogs.

It’s true, at first, it doesn’t even hurt. Like an undiagnosed cancer. A mass of cells proliferating on their own. When you become aware of it, the morning turns brown and your freedoms have burned like a book left too close to the fire.

Your global security has become your global prison and you are confined inside it.

I saw that one of your ministers, occasionally a great amateur of women in a position of weakness, is working to give your policemen the impunity some of them have requested for their maintaining of disorder. They no longer want their mugs filmed in closeup while they’re hitting on the pile of bodies. It gives them a complex, a mental problem… They have had enough of the “film, broadcast, show everything” and would like to revert to the good old “keep moving, there’s nothing to see”. In short, same as with us, they want journalism be a crime.

Mind you for the police, preventing filming is better than gouging out eyes to keep them from seeing, no?

That must be what democracy is about, economizing munitions.

All right, as you know, Turkey has taken the lead, but your government will catch up with it, and faster than you think. Police cameras, drones, facial reconigition, police in variable uniforms, all this is already usual over here. Weapons authorized for the proper protection of civil servants. Modernism turned globally secure, in other words. In any event, apart from women and LGBTIQ, and Kurds of course, those who still take the risk of demonstrating over here are becoming rare. You will see, self-cersorhip quickly becomes a habit. In fact, I seem to notice that quite a few of your journalists are practicing it already. Next will come the sucking up, to always stay on the side of the hand that gives hand-outs.

But what I notice is that the French government is doing it to you in reverse, police-wise.

We have had the army for centuries with so-called “democratic” presidents that were controlled by the constant threat of a coup d’état. Those were in the secular period when State nationalism was muslim. This was in my youth, my bath of Turcity. In the opening of the years 2000, we saw brother Erdoğan show up, demanding “freedom” along with his buddy Gülen. The brown morning had turned green, with the help of our dear European Union. We almost became a part of it, as an example of secular “Turco-Islamic synthesis”. Things went sour afterwards. I won’t tell you yet again how the little brother managed to put everyone asleep and lock up the others. But today, we have a brown and green morning and… global security. And the brother as President, as per the constitution.

In your case, I get the feeling that your president, in attempting to hold on to his job, is getting laws voted for the one who may well replace him in a year’s time. For a financial liberalist, preparing the ground for a sovereignist straight from the fascosphere may appear surrealistic. But the result will be the same for you: libera, authoritarian, globally secured. Maybe with an extra dollop of racism, as required by the brown ones. You have “intellectuals on reserve” for that, already in training on television.

Soon you will have “real journalists” on your TV, same as over here, with “phony journalists” convicted for having stressed out your policemen. Wait a bit longer and you will see the accusation of “terrorism” and of “complicity with terrorism”, simply because they will have shown themselves a bit less Charlie than requested.

Seen from over here, France “à la turca” is not appealing.

Yes, of course, I’m exaggerating as usual. Apparently, a brown France would be an historical contradiction. In fact, the real colors were black and greyish green.

Vichy water was where you found a brown deposit.