Erdoğan, Bro’ the First, against the Non-Believers 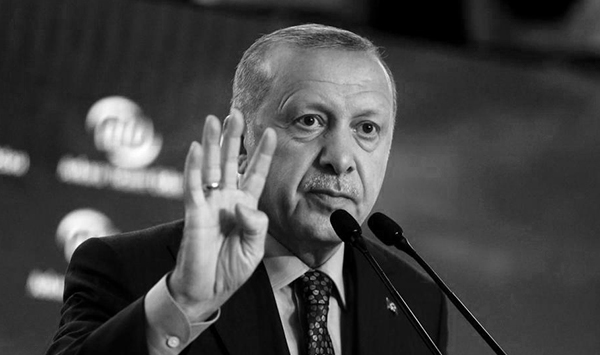 Headlines are streaming, following Erdoğan’s quasi-anathema hurled against French President Macron, after a number of less-than-diplomatic exchanges over Lybia and the Mediterranean.

Coupled with terrorist assassinations on European soil, these words and speeches by Erdoğan, coupled with calls to boycott French products could lead some to believe the crisis has reached unaparalled heights.

One occurrence does not a custom make, so we are sharing a video borrowed from a television station that never backs away from spreading Erdoğan’s declarations.

“From the Middle East to Northern Africa, from Southern Asia to Europe, everywhere, not a day goes by when oppressions targetting Muslims do not increase. Austria’s current attitude toward Muslims, mosques and prayer venues is only the visible side of the hostility and racism against Islam in Europe. From this location, I am addressing myself to Europe and more specifically to Austria, to Austria’s Prime Minister: Listen, don’t forget this; you are an apprentice, your attitudes could bring you a lot of problems. Because you have to know that closing down a mosque in Austria, expelling Muslims from Austria, will lead men of faith over there to pick up the struggle between the crusaders and the faithful, and that you will be responsible for this. And in telling you this, I am not only addressing you over there. I am addressing myself to all the Western World. Hey-Ho Western World, starting with Germany! Put your house in order. If you do not put it in order, events will follow another path. Because we also have our own arguments and steps we will take. Consequently, we will never allow the persecution over there of my 250 thousand brothers. We will do what we must do.”

Well, contrary to what one might think, these words date back to June 11 2018, more than two years prior to the terrorist action claimed by the Islamic State in Vienna these past few days.

In no way does this exonorate Erdoğan for creating a favorable climate to such actions in the last few weeks, but this does not designate him as the ideal culprit of the moment. And our readers know full well how much we detest this individual.

Quite the contrary. Replacing these words from 2018 in context, although they were barely mentioned in an edition of Ouest France on June 10 2018 which was quoted in Le Monde as the extreme right did during the years from 2017 to 2019, strikes us as intresting in more ways than one, in order to clear up some very yellow-livered comments produced by the oh-so-secular French right wing and right-leaning leftists now competing with the extreme right wing in the downward spiral. The (Grey) Wolf is not always where one wishes to find him in order to dissolve him.

• The Turkish presidential elections that allowed Erdoğan to inaugurate his new constitutional garb transforming him into a super-President took place in July 2018.
• During that same year, France played host to Erdoğan twice, once in January, then in November.
In January, Foreign Affairs Minister Le Drian made the following comments: “… In many regards, Turkey remains a strategic partner in matters pertaining to migrations, the fight against terrorism, resolving regional crises, even though the dialogue must be more demanding concerning the commitments Turkey took upon itself concerning Human Rights…” In March 2018, while Erdoğan ordered troops to invade Afrin – the Kurdish territory in Syria – this same minister recommended “moderation” to the one who, undoubtedly, would thus resolve “a regional crisis” and “fight against terrorism”.

In November 2018, the President invited “State leaders” to the ceremonies marking the November 11 Remembrance Day commemoration of the Armistice declared in World War 1. Erdoğan was a participant. He strolled through Paris and gave the “rabia” sign of “four fingers and a folded thumb” (symbolizing support for the Muslim Brotherhood) to a small crowd greeting him with Turkish flags. This caused a flurry of emotion in the Figaro. Erdogan followed up by declaring he was saluting ‘the brothers’ and denounced the “corrupting influence of the West”.

• In December 2018, Erdoğan spent three days in Germany where he inaugurated a mosque and collected some cash. As a reminder, the Turkish diaspora in Europe had provided him one million votes, six months earlier.

• Finally in March 2018, following several instances of blackmail in 2016 and 2017, Erdoğan demanded an additional 3 billion euros from the EU as part of the March 18 2016 deal over migrants.

What could possibly serve to “relativize” the quasi-fatwa hurled by Erdoğan against Austria in 2018, as demonstrated in this video? What could possibly have kept those words, just as violent as the current ones concerning President Macron’s mental faculties, out of sight, so as to avoid causing so much as a ripple in the phony smiles the EU had for the Reis in 2018? What made eyes turn away, to the point of being complicit in the invasion of Afrin and the situation it caused in Syria and in Rojava?

To these questions, one can only answer: for the most part, it was the migrant issue and the accord initiated by Germany and warmly supported by all.

Thus the agendas of the xenophobic and identitarian extreme right movements in Europe, and their political blackmail, dictated the dishonest compromise with the “big brother”.

This reminder greatly modifies the perspective over the pseudo terminology of “islamo leftism” being traded as an insult these days. As pertains to bilateral trade with Saudi Arabia and Qatar, we already get the picture, from the right-leaning leftists and right-leaning extremists.

If we consider Erdoğan nowadays as he attempts to grab the leadership relative to his neo-Ottoman dream, by counting on the support of the “Muslim Brothers” and his rhetoric about “Muslims in need of saving because they are under the yoke of non-believers”, and of these same unfortunate brethen who must be “won over to the cause”, one must admit that a large boulevard was cleared for his ideas over the previous years. And certainly not by those political currents in France that are supportive of the Kurdish struggle, for instance, with its component of feminist struggle.

To speak clearly, what is grouped under the designation of “Muslims” is mostly made up of populations assigned to a religion and whose “social problems” are well known. This is done for reasons of political expediency and deviates from the religious plan as pertains to racism as well as other forms of social discrimination, all flowing out of State policies conducted in the last half century. One need only mention the words “decolonization”, “immigrant labor”, “ghettos in housing policies”, and many others, to get a clear picture of the landscape.

Within and outside of this landscape, radical political solutions confront one another. If one “caricatures” slightly, they range from radical islamism to sovereignist assimilationists. From the brothers, through the right-leaning white secularists, on to the self-declared xenophobes and further on to the proponents of the theses speaking of the “Great Replacement”. Such an arena promises to fill the television studios for years. To which should be added the “islamist intellectuals” stirring up the pot of victimizing by instrumentalizing obvious realities – which will in no way protect said “muslims” who will become the victims of all the different camps at once.

Islamist terrorism is murdering everywhere across the world. Beginning in countries where Islam is almost a State religion. Austria and Kabul were hit at the same time. In Africa, it is happening every day.

Radical political islamism and its ‘soft’ variations are a political ideology, a means of domination and power. It is perfectly able to adapt to forms of unfettered capitalism and to the management of totalitarian states. And, indeed, Erdoğan who is attempting his takeover bid in competition with the “brothers”, should, at the very least, have a Security file opened against him in France.

Yet, this identifiable and identified political islamism finds itself facing leaders who do business with it openly, usually by selling it weapons, and its leaders or Party leaders, be they sovereignists, nationalists and xenophobic, open up roads for them in high-end negotiations with its representatives. Should we then blandly talk about islamo-capitalism, or islamo-nationalism? Turkey and its Bro’ The First, is an interesting laboratory in which to observe the monster. Digging a bit is more efficient than showing Erdoğan in his underpants or ranting in the secular mode every morning in the media, don’t you think? Which is not to say that we are banishing secularism, quite the contrary. But when self-proclaimed intellectuals trailing whiffs of neocolonialism, currently pretend to be its hypocritical defendors in the manner of the Third French Republic, assailing multiculturalism while they’re at it, and mimicking a universalism voided of all meaning, they reinforce the xenophobic theses of the right extremists.

Ever since Kedistan‘s inception, we have constantly sounded the alarm against the Munichs in EU policies or their silences, because these questions keep cropping up when speaking of the relationships between the Middle East and Europe. And the way lives in Northern Syria and Rojava are sacrificed to ISIS, and abandoned to the hands of the “brothers'” godfather, because they speak of a different future for humanity.

These policies will give birth to monsters and clones of those already at work.