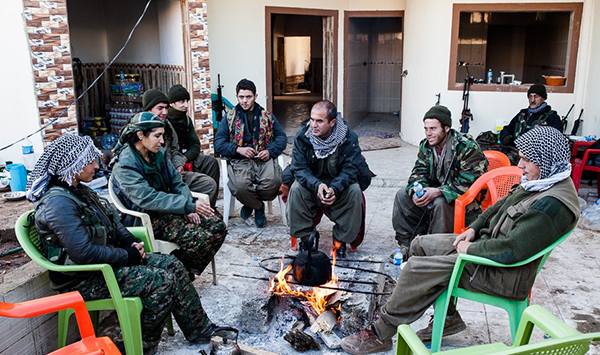 December 29 2014. By a cool winter morning, men and women fighters of the PKK sat in a circle on plastic chairs around a fire on which they warmed their hands. They talked with one of their own, sitting with them, an older man with thinning hair. Nothing set him apart from the others, except the respectful tone used in addressing him. Regularly, their discussion was interrupted by someone bringing him a message. He gave his orders in a calm and poised voice. This man was Egîd Civyan, comandant in the HPG.

When ISIS sent its fighters to commit a massacre in Shengal, he was the one who, with a handful of PKK fighters, went to the help of the Yezidi population abandoned by the peshmergas who were on the payroll of the Barzani family and fleeing across the mountain. Thus, he allowed the opening of a corridor toward Rojava by which 150 000 people managed to escape being massacred. He then organized a counter-attack against ISIS and the securing of liberated zones for Yezidi refugees, up to the offensive to reclaim the town of Shengal, beginning in December 2014 and ending one year later.

According to a release from the HPG command, Egîd Civyan fell as a martyr in the Van region on September 11 2020. He was then a member of the HPG command and responsible for the region of Botan. He died in the aerial counter-attack launched by the Turkish aviation, following the storming of a Turkish army command at the top of a hill by a group of fighters, during which the HPG claim to have killed several high-ranking Turkish officers.

Egîd Civyan was born in the region of Gever, in Bakur (Northern Kurdistan) under the name of Vahdettin Karay. He discovered Öcalan’s thinking during his studies. In 1995, he abandoned the university to join the PKK and fought in its ranks for 25 years, from Botan to the Zagros mountains. He commanded several zones. During the guerilla’s retreat from Northern Kurdistan in 2013, he moved about in the Medya defence zone where he was active notably in organization and education.

After the liberation of Shengal in 2015, he remained there for two more years and participated in the setting up of an autonomous administration based on the model of that in Rojava, before returning in 2017 to the Medya defence zone and in the Botan in 2018.

With his death, the PKK has lost a battle-hardened combatant and a valuable commandant.