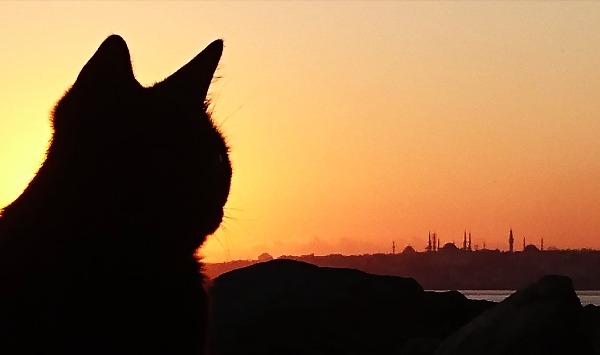 In the days when the Countess of Segur was having one of her famous children’s novels “Sophie’s Misfortunes” proofread by her eldest son, Saint Sophia was getting a facelift from the Swiss brothers Gaspare and Giuseppe Fossati, working under the orders of Ottoman Sultan Abdülmecid. I know my classics, as you can see. All this was going on in the 1850s.

Saint Sophie has thus been at the center of concerns for centuries, as she is today, again embroiled in a byzantine quarrel.

A stone’s throw away from the centennial of the Lausanne Treaty marking the true creation of the Turkish Republic, Erdoğan is proclaiming Sophie’s return at long last to the warm Islamic embrace, clamored for since 2012. Nothing new under the Istanbul sun, however as Hagia Sophia will continue to play the shadow puppet in the setting sun, with a little help from clouds of air pollution.

Monsieur and Madame, in the company of the country’s deserving and devoted elites, many dignitaries and a few unworthy ones, trinket-bearing representatives of political parties feeding at the trough of corruption, thus prayed together on Friday for the successful pursuit of their affairs. According to the fawning media, the ceremony was worthy of the event. Only an ancient one as old as I am did not deign to stand in for the photo, as if the CHP party he presides had not been performing its ritual ablutions for as long as everyone else. Securalism, my…

With a new carpet, the prayers won’t be rigged as are the cards in a casino. 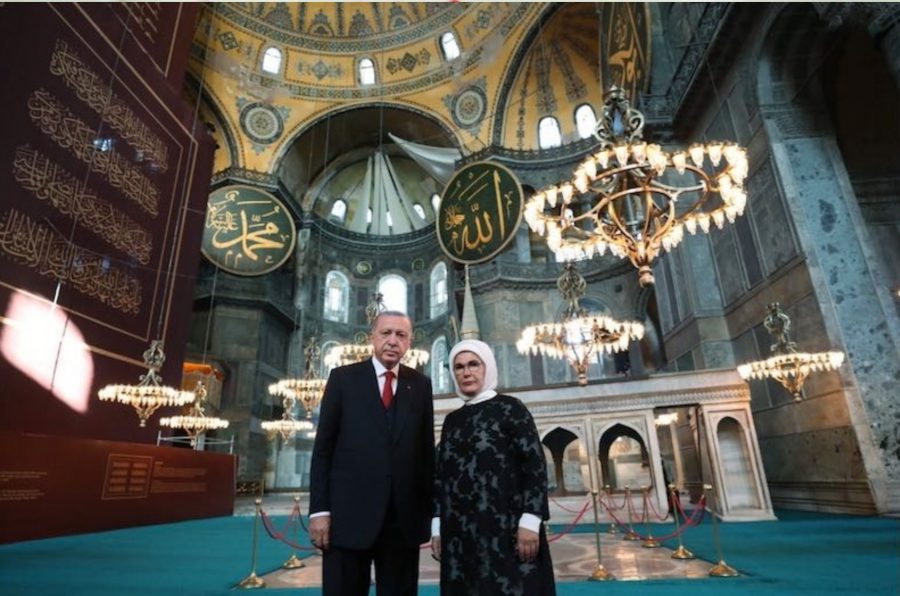 I also read on social media some people were offended because the officiant, leader of the Authority on Religious Affairs (Diyanet) was holding a saber in his left hand. It’s traditional with us. Concerning the left hand, I refer you to the dogma. Besides, shouldn’t I be offended also since your church was sometimes described as being in an “alliance between the saber and the holy water sprinkler called an aspergillum”? No one stood for the Diyanet but everyone paid scrupulous attention to his sermon, as Ottoman as could be desired, retransmitted for the common people outside on a huge screen. That’s one thing done, another checked box on the Erdoğan’s agenda of promises. Next checkbox! It is about women, and here again, it’s back to bigotry we go.

But let’s get back to our Sophie, to the “end of the deep wound to the heart of our nation” (sic). This tells the whole story. Turcity, an exclusive nationalism and the famous Turco-Islamic synthesis. Erdoğan has found his left hand again and can take hold of Osman’s saber.

Have you ever seen another communication plan carried off as efficiently as this one, in front of journalists and TV stations from Western countries? Of course, had Putin been invited, he would have been forced to decline, this being contrary to his Orthodoxy, but it would have been even more spectacular. In passing, here’s a suggestion for the next time: inviting the gas representative would be an acceptable gesture.

In short, you have your sacred asses, we have our uplifted ones.

I read somewhere that this represents a step away from the “secularism” so dear to our cherished Atatürk. I even read this everywhere in your papers. Where did you get the idea that the Turkish Republic was ever “secular”? You have been repeating this for decades, just as true as the fact that our national novel forgets to mention that being Turkish also means being a Muslim, failing which one is relegated to the rank of a minority, a domestic enemy or worse still, an Armenian dog. Why don’t you read a bit of what honest historians say about that fine secularism, those historians who do not traffic in genocide denials?

I also read that the Kurds are nostalgic over the Lausanne Treaty.

Right, and what else while we’re at it? This Treaty from 1923 is the one that eliminates the clause in the anterior Sèvres Treaty, thus cancelling out what could have become a Kurdistan.

This historical period is very poorly known by the public in Europe and, even worse, by your journalists, who then go around spewing about Turkey, Kurds, Syria, with their head full of false beliefs.

That period which saw the collapse and implosion of the Ottoman Empire, the one that sets our Reis to dreaming out loud as he mimics its regalia, the one that was also the one when, holding all the cards, the European empires penned in borders with a ruler, consolidated military dominance, cozied up to nationalisms, manipulated puppets and baptized Nation-States.

One can even wonder if the Sèvres Treaty wouldn’t have ended up creating for the Kurds a State worthy of Turkish nationalism. If someone can find a piece of writing on communalism and democratic confederalism from that period, and mentioning an inclusive Kurdistan, I’m willing to take back my question. Still, I have a feeling that the Kurdish movement’s reflection on the matter did not occur over two days, and that the critique of nationalism and of the Nation-State did not come from Barzani.

One reads many things about Sophia and around Sophia.

Meanwhile, the police goes on stalking, the police arrests, the army bombs, in Syria, in Irak, injustice pronounces sentences and the prisons are full of innocent “terrorists”. And, true enough, one can say that all that was present in embryonic form in the Lausanne Treaty.

“Set me up two Nation-States, and I will give you a war,” my dear Sophia.