Turkey • The Bars Against a Projected Bill 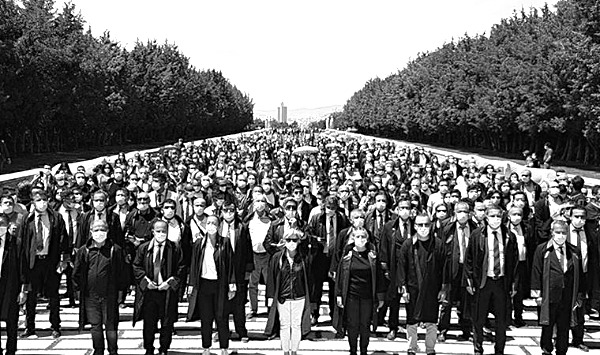 A bill is currently being presented in Turkey that would allow the creation of several legal bars in towns having more than 5 000 registered lawyers.

Thus anticipating the creation of several bars in a given jurisdiction, the bill on amendments to the law on the status of lawyers and some other laws, was submitted to the President of the Parliament on the morning of June 30th. The ruling AKP Party is attempting to have the text adopted as quickly as possible prior to the closing down for parliamentary holidays. This would mean the new system would be effective for the next election of Bar presidents in October 2020.

According to this bill on “the plurality of Bars”, prepared jointly by deputies of the AKP (Party of Justice and Development) and the MHP (Nationalist Movement Party), lawyers would be free to register with the Bar of their choice, if there were several in the same town. The bill provides for a Bar being created for a minimum of 2 000 lawyers, should the town have more then 5 000 lawyers.

According to the lawyers, the government’s aim is to divide the lawyers and, most importantly, to end the opposition to the reforms shown by the most important Bars for several years. They have denounced the control over the judiciary system, the successive purges or periodic revocations, and the nominations of judges and prosecutors allied to the ruling party. The independence of the judiciary was already of a dubious nature so that the creation of several Bars under the judiciary control of the AKP is unthinkable.

June 30th 2020, on the very day the bill was submitted to parliament, hundreds of lawyers at the call of the Istanbul Bar assembled in front of the Çağlayan Justice Palace in Istanbul in protest against this bill which would “divide the Bars”.

Lawyers elsewhere also attempted to join the movement and marched in protest in the Mediterranean province of Adana in Turkey. The police intervened, unrest ensued, and the police used tear gas on the crowd.

At the demonstration in front of the Istanbul tribunal on June 30th, hundreds of lawyers chanted the slogan “The defense is not mute, it will not be silenced” and the president of the Istanbul Bar Mehmet Durakoğlu addressed the crowd: “They say we are getting involved in politics. Can you show me in which country it is a crime to be involved in politics? They do not want lawyers to talk about politics. We will talk about it until we die. We must demand human rights. It is our duty to protect the Rule of Law. Here, I am addressing myself to Ankara: the Bars cannot be silent. Ankara must know this. We do not obey, we do not bow down.”

Durakoğlu also referred to the constitutional referendum in 2010 and to Preacher Gülen’s Brotherhood, former friend and now enemy of Erdoğan, and redesignated since their conflict as “the terrorist Fehullahist organization (FETÖ), which is considered responsible for the failed attempted coup of July 15 2016. “During the referendum in 2010, we tried to warn you: “Don’t do that, you are handing over the judicial power to FETÖ. We were told: “You must not say FETÖ, you must say Mr. Hodja. This is also a FETÖ project! Bear that in mind. It is a project that was planned for in the 2010 referendum.”

“We will always respect the will of the Great National Assembly of Turkey (TBMM) but we are also speaking to those who are attempting to use legislative power as a weapon and explaining this will turn against them as does a boomerang. We are reminding them of this. It is our democratic right to do so. We will use this right to the end. We will demonstrate that this bill is contrary to the norms of universal law because we are lawyers.”

78 bars published a joint declaration in the press: “Under the guise of reform, it consists of a dismantling of the bars as a way to disqualify and muzzle them, it is in truth a threat to muzzle citizens, leaving them helpless when their liberties and fundamental rights are violated. This dismantling will create groups of jurists with weak voices who will submit to politics or other alliances instead of pursuing independent defenses, lawyers who will wear stickers on their gowns.”

Ongoing protests under the name of “Big Defense Assembly” attracting other bars, the Ankara Governor’s office has imposed a prohibition on assemblies and demonstrations for 15 days. In the declaration about this prohibition, the governor referred to a recent rise in the new cases of coronavirus…“Considering this could lead to a speedier propagation of the illness if people assemble in large groups” and underlining that “those who do not respect this decision will face sanctions according to bill n° 1593 on public health.” The Health Minister, Fahrettin Koca, also expressed his support for the prohibition and the motives invoked for it.

A large demonstration took place in Ankara on July 3rd despite the prohibition and despite the police barring the entrance of lawyers into the capital, with orders to disperse…Banners carried by thousands of jurists read “Defense cannot be reduced to silence”, “We defend the defense”, “The defense on the march”, “Don’t touch my bar”. The lawyers chanted “The defense is not mute, it will not be silenced” and “We do not stay silent, we do not fear, we do not obey”, “shoulder to shoulder against fascism” as well as “Feyzioğlu resignation”.

Support was also expressed for the cases of Ebru Timtik and Aytaç Ünsal, two imprisoned lawyers on hunger strike “for their right to an equitable trial.”

Representatives from the Diyarbakır Bar joined the demonstration. They chanted the name of Tahir Elçi, Diyarbakır Bar president assassinated on November 28 2015 and chanted “Long live the brotherhood of peoples.”

In his speech, the president of the Ankara Bar, Erinç Sağkan expressed their determination: “We will never bow to the blows of a coercive regime.”

Under the rule of the AKP, injustice in Turkey has already replaced the possibility of seeing a “political trial” carried out equitably, dividing what is left of a meaningful defense is an additional step.