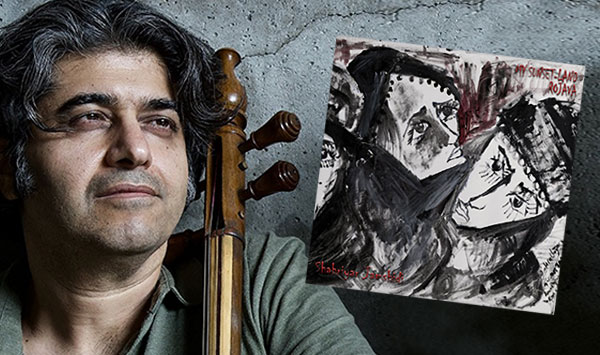 Our paths crossed with Shahriyar Jamshidi at a time when his latest album, My Sunset-Land Rojava, was still in the making. I would like to introduce him to you now. 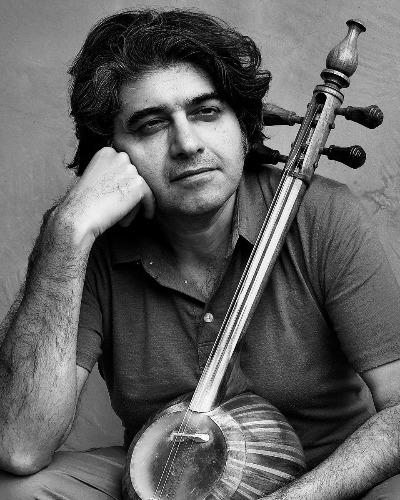 It was a fine meeting filled with humanity, affection and art… And speaking of art, there isn’t only the music because our first contact happened over Zehra Dogan’s paintbrush. Shahriyar wished to illustrate his album My Sunset-Land Rojava with a work by Zehra. The album, deeply inspired by the ideals of the peoples of Rojava places Kurdish women at the forefront, for the ways in which they have devoted their lives to freedom for Sinjar and Kobanê during the past few years. In a sense, once again, our dear Zehra brought us a new friend.

Shahriyar Jamshidi is a Kurdish artist of Iranian origin and is currently residing in Canada. He is a musician, a composer and a singer. A graduate of Teheran’s Arts University and former artist in residence at the Banff Center, Shahriyar has devoted his artistic career to the preservation and transmission of the Kurdish musical heritage.

His instrument is the kamânche, a small ancient violin with four plucked chords, originally from Iran. You sometimes come across the kamânche under different names in various regions for it is widely in use in the Middle-East, even reaching into the Balkans, Central Asia or Morocco…

Shahriyar is a contributor on a number of projects. He is the founder of the Dilan Ensemble, a Kurdish musical group from Iranian Kurdistan (Rojhilat), created in 2003, as a tribute to Kurdish brothers, musicians Qadir Dilan and Muhamad Salih Dilan from Southern Kurdistan (Basûr).

He is also a member of Kamancello, a duet featuring Shahriyar on the kamânche and Raphael Weinroth-Browne on the cello. Give in to the temptation of the trip, the marriage of those two talents is incredibly beautiful…
Here is the link toward the videos.

Along with the discography of those groups to which he contributes, three solo albums have preceded My Sunset-Land Rojava: The Lullaby of A Nomad (2018), A Yellow Flower (2014), Call of the Mountains (2008).

During our latest exchange, Shahriyar told me: “I found many interesting aspects inside Zehra’s artwork, emphasizing the cultural symbols, the role of women, colors and dynamic. There elements are significantly connected to my album’s theme.”

Indeed, the similarities between the two are so strong I am almost tempted to speak of a “reunion”. Shahriyar continues: “Women, the musical instrument Kamânche and Rojava: all these three aspects together make a triangle to maintain the topic of ROJAVA.”

So there you are, this is how we met. The inner chord vibrated and Shahriyar’s music did the rest. A moving immersion, strong enough to make you forget the world around you. You too can immerse yourself.

This new creation titled My Sunset-Land Rojava is a self-published album. “I intend to to devote a large part of the revenues from the sale of the CDS to Kurdish Yazidi women who suffered from the genocide in Irak,” the musician specifies.

The title “Tears of Singal (Sinjar)” in particular is a reminder of one of the somber tragedies of the 21st century, the genocide of the Yazidis in Irak, during which more than 5 000 civilians were massacred, leaving hundreds of the liberating fighters on the ground. As a reminder, one thousand women were seized and sold into slavery by ISIS.

This is another concrete link with Zehra who was the first journalist to visit Sinjar in order to meet thse women. At that time, the world was looking elsewhere and ignoring the fate of Yazidi women. Zehra’s series of reports did not “interest media who had other news priorities”, and was only published by Jinha, her feminist and feminine news agency, and it brought Zehra the Metin Göktepe Journalism Prize in 2015. You can read this reportage, titled The cry of Yazidi Women containing raw testimony from the women. Take you courage in hand prior to reading… [in French, or in Turkish, in English soon.]

In a glance, the shiny blue sky of my childhood was under the murky shadow of politicized society while I was gradually rooting in the Kurdish tradition, the marginalized culture in one of the diverse West Asian countries, Iran. But music was the alternative to remote the feeling of being sidelined in this not grateful place, to avoid being under the magnetism of politics, a part of routines under this complex situation. Even life has strongly pushed me to step in the edge of distinctions between reality and equivocation, entirely influencing my future artitic view to observe the concrete facts but reflect through my art.

In the past decades, revolutionary waves of modernity and democracy have spred the belief of equality rapidly in the area by mobilized women’s endeavors who devoted their lives for change.

“My Sunset-Land, ROJAVA” is retelling the tale of a heart-sore nomad (a Kamanche) from Kurdistan, where tunes are born in her every brief stop she takes for a nap while passing the unwanted confines of the torn land of the Kurds. Every morning before sunrise settles, Kamanche abandons the spot leaving a newborn Stran (song)…

One song in this album particularly holds one’s attention. It is titled “Viyan” and is dedicated to Viyan Peyman, dengbêj (Kurdish bard) and YPJ fighter who fell in 2015 in the Syrio-Turkish town of Serê Kaniyê, where she had gone in mid-February to fight against ISIS. You can listen to Viyan in a video with French sub-titles in Estelle Amy de la Bretèque’s article Pourquoi se lamenter ? (Why lament?) in which she also explains the tradition of the dengbêj.

“The song ‘Viyan’ retells the life of a Kurdish Iranian woman, Viyan Peyman (Gülistan Tali Cinganlo), a singer, and a storyteller (Dengbêj). Leaving school and all attachments behind, she joined the story of resistance fighters in Syria and lost her life to defend Rojava in 2015.” explains Sahriyar.

A special video was put together for this very special number. 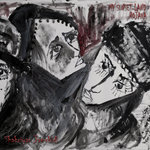 You may pre-order the CD My Sunset-Land Rojava or its digital version, by clicking here. The digital album will be available June 19. The CDS, currently in limited numbers, will be shipped starting on June 18. An opportunity to offer a gift to relatives and friends.