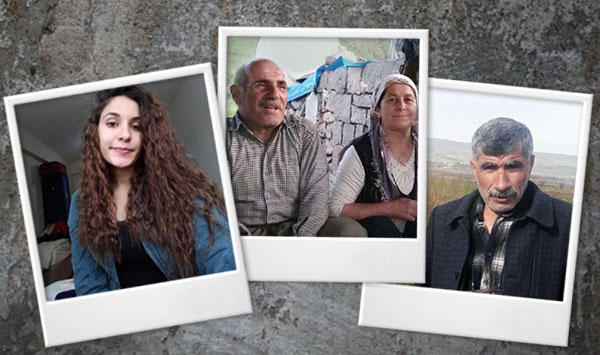 Mehmet Bal (58 years old) disappeared 110 days ago. He left Batman on January 24 2020 to visit a son in prison in Istanbul. He was last seen on the recording from a surveillance camera, taking the boat for Kadıköy in Eminönü harbor.

The Syriac couple Diril disappeared in Şırnak on January 11. The lifeless body of Şimuni Diril (65) was found last March 20 but there has been no news of Hurmuz Diril (71) for the past 123 days.

Gülistan Doku (21), a student, “evaporated” on January 5th in Tunceli (Dersim) and has not been found for 129 days.
Their suffering families have attempted by every means to get some information, with no results. The common demand of the families’ lawyers: a thorough investigation. 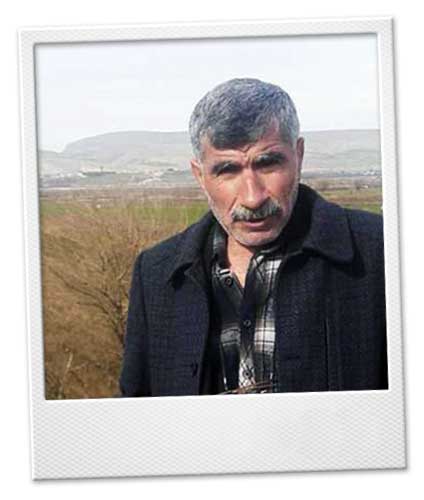 Ahmet Çelik, lawyer for the family of Mehmet Bal, specifies that the investigation was opened on January 27 2020 and the case was dismissed on February 28. “I filed an objection, but no decision has followed. In the file, one finds images of Mehmet Bal boarding the ship, but no images have been filed of him onboard or when leaving the ship. No research having been conducted, the documents state ‘his leaving the ship could not be determined’. Yet, there are several surveillance cameras near the harbor in Kadıköy A search should yield images. The decision to dismiss the case landed suddenly when the prosecutor was still telling us ‘we have several other things to do”‘and prior to the arrival of the recordings we had requested. This premature dismissal, with no clarifications and no sufficient searches is suspect. Our doubts must be lifted. The attitude at the Security Directorate is truly deplorable. The authorities who called on Bal’s children accuse them, make fun, vilify them ‘perhaps he ran off with a woman’ or ‘perhaps you are the authors of his disappearance’.”

Ercan Bal, the son of Mehmet Bal, says neither the police nor the prosecutor take this disappearance seriously. “When my brother reminded the prosecutor that, in three hours’ time, they had found two people who had disappeared in Bursa, thanks to recordings on surveillance cameras and phone signals, he answered “that case is different from this one”. How is it different? Someone who disappears is someone who disappears. There are no cameras, both onboard and in places such as Kadıköy? This is a very suspicious situation.

During our first visit to the police station in Gayrettepe that was responsible for my father’s case, the fact they had us leave, that the security officer insulted us, that they constantly spoke in an ironical way, as if they knew where my father was but were hiding it from us, I started thinking there was a problem in this case. During my meeting with policemen in charge, two weeks ago, he said to me ‘why should I pay attention to your father at this point’.”

As for Salih Bal, a nephew, he says “if the authorities looked at Mehmet Bal’s phone signals, they would know where he is.”

Hasan Bal is a cousin of Mehmet Bal and the last person to have seen him. For Mehmet Bal, on the day he arrived in Istanbul, on January 24, went to the association where Hasan works, “Bekirhanlılar Derneği” located in the Bağcılar neighborhood. Mehmet Bal boarded the ship in Kadıköy just after this visit. “The prosecutor’s office told us: ‘Send you request to the Directorate of Disappeared persons in Gayrettepe, so that you may open a file.’ We did so. Approximately one month later, as we were speaking to the media in front of our association, I received a convocation to come make my statement. Things did not go well at the police station. Later, I called the policeman in charge of the matter ‘you keep calling every which day, he told me, I have plenty of work. I have plenty of files. Don’t bother me any more.’ I asked then why Mehmet’s leaving the boat could not be seen when there are many cameras in that location. He told me ‘there are no cameras’. When he added ‘my conscience is clear’, I hung up.” 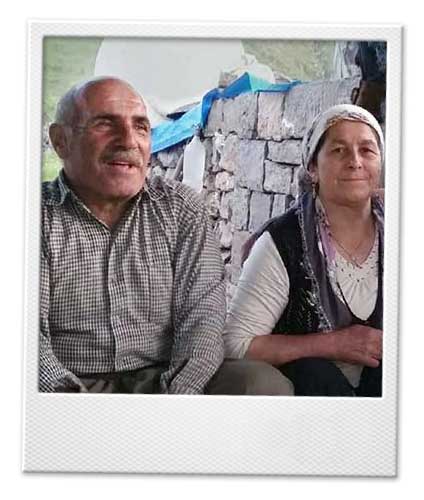 • The case of Syriac couple Diril

Remzi Diril is the priest in the Chaldean Church of Istanbul, and son of the couple that disappeared from the village of Kovankaya, Beytüşşebap district. He explains that the investigation has reached a sensitive stage. “The prosecutor is trying to tease out certain clues. We are in constant communication with the Prosecutor through our lawyer. He is doing everything he can to resolve the issue. But despite this, legally speaking, nothing is moving forward. The searches done by the authorities on April 28, 29 and 30 yielded no results. A few days later, my brother found a shoe and a kneepad that had belonged to my father. We have nothing solid to go on. We cannot make any assumptions. My mother’s medical report is not available yet, but we have received a preliminary report of the autopsy. It signals ‘death following wounds’. We think our father may also have been killed and thrown into the river. But I still hope he will be found alive.

Our village is one of the most remote in this region. The roads remain closed all winter. And in the spring, with the melting snow, the rivers flow very briskly. Professionals for underwater searches did not come. The teams should come as quickly as possible. Otherwise, we will have to wait for July when the current abates.”

The couple’s nephew, George Diril, notes that the latest searches were only done on the riverbed of a few villages. “We don’t know if those searches were done with the view that my uncle would have been killed and thrown into the river. But it was conducted like a military operation. And the coroner’s report was very much delayed.” 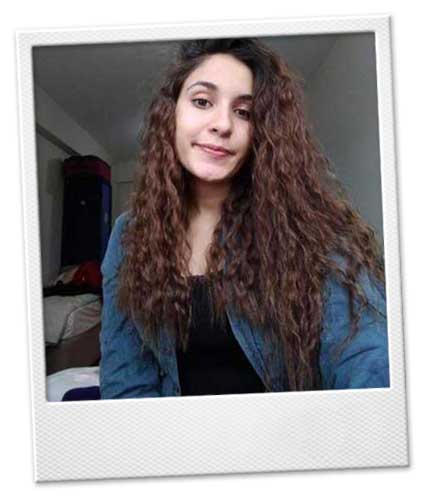 • The Case of Gülistan Doku

Ali Çimen, lawyer for the family of Munzur University student Gülistan Doku, notes that the file being directed at first toward the possibility of a suicide was a mistake. He also reminds that Zaynal Abakarov, noted in the file as a suspect, has not even been placed in custody. “Nonetheless, some efforts were made in this file. For example, on the day of Gülistan’s disappearance, from twelve noon to 1:30 some 400 people were heard. But we think that at that time, the notion of suicide was involved and that the inquest was badly oriented. Yet, on the eve of the disappearance, the suspect, Zaynal Abakarov argued with Gülistan Doku and, following citizen complaints, he found himself appearing before the police. And he is also the last person who saw Gülistan on the day of her disappearance. Zaynal’s family was witness to important arguments at the house. Most significantly, the day of the disappearance, around 17:00h, Zaynal sent a message to G., a friend of Gülistan’s saying ‘she is the one who provoked this’. G. informed the police station of this message.

But, go figure out why, in this case, no other notion than suicide is taken into account and nothing serious is undertaken in the eventuality that it is a case of feminicide. Consequently, no procedures are undertaken concerning the suspect Zaynal, for example no confiscation of his phone, no custody. Yet there should exist a legitimate suspicion and Zaynal should be arrested. He should have been interrogated, not in Alanya but in Tunceli where the disappearance occurred. Today, Zaynal is not even under a prohibition to leave the country. This vision of a suicide is a mistake that has disoriented the inquest. Moreover, the authorities in charge of the inquest have not expressed their opinion. They may possibly still think it is a suicide.

On the day of Gülistan’s disappearance, Zaynal’s father, E.V. who is a policeman, was on holiday. We do not know where he was, what he was doing. There is nothing in the file about him. All he says is simply that “the car was stuck, that is why I went”. But he does not declare where he went, while Zaynal was held for an hour because he did not have his papers on him.”

Ali Çimen asks: “Why would a policeman make a false statement? Why is this disppearance being handled by the office where the suspect’s father works?” and he adds: “All of the information received to this day comes mainly from testimonies by teachers, Gülistan’s friends and other citizens who went to the police station to make spontaneous declarations. None of the information received figured in Zaynal or his parents’ statement, nor were they revealed by the police inquest. As an example, following matching declarations from two sponaneous witnesses who saw Gülistan in a specific location at 16h44 revealed that she was still alive at 16h44 and the prosecutor extended the inquest until 19:00h.”

Lawyer Ali Çimen specifies that he took the file on the 80th day of the inquest. He then submitted requests. “The requests were accepted, but not a single document was added to the file. Our requests are for simple things that can easily be answered. For example the trafficked registrations of the suspect are not on file (HTS – Historical Traffic Search), his cell phone has not been examined. Most important is knowing what happened after 16h44 when Gülistan was last seen alive. That is the huge void. A suicide theory says Gülistan would have thrown herself from a bridge located on a dam. The camera recordings were poor, we cannot determine Gülistan’s situation on the bridge. The gendarmerie declared they could not improve or increase the image by more than 5%. However, following our request for an improvment of the images, the recordings were sent to TÜBİTAK [Scientific and Technological Research Council of Turkey] and a private firm authorized by the Istanbul Palace of Justice. This is the last advance in the file. We are awaiting the documents with the results.”

Ali Çimen adds, “authorities probably consider that Gülistan’s body is in the water of the dam. But we must remember that two people have lost their lives in this same location, at different times, both well before Gülistan’s disappearance. Their bodies were found. This probably means that Gülistan’s body is not in the water. Her family is asking “we know Gülistan is not there, but if you are searching for her in the dam, then empty it.” It is not very difficult to empty the dam but the staff says the water level does not allow for it. On this topic, the prefect would have made a promise to Gülistan’s family, but no procedures have been implemented. The Water Directorate (DSI) has also announced that this would be a costly operation. Speaking of cost is unacceptable when it is a question of discovering a young woman’s fate.

In any event, we demand that the suspect be arrested and that a more just and thorough inquest be carried out.”

In a country where justice and the police daily demonstrate toadies’ faithfullness to the regime by arresting and sentencing for motives outshining one another in their inventiveness, “troublesome disappearances” always raise suspicions. As a reminder, let us mention the deep traumas caused in the years 1980/90 when kidnappings and disappearances of opponents or people considered as such, were legion. The Saturday Mothers still testify of these disappearances by obstinately demonstrating in order to receive information about those who were their children then.

In cases where the police or the justice system balk at opening an inquest or dismiss cases without looking further, suffering families may legitimately suspect tacit, or active, collusions with the authors of murders or feminicides. This is why questioning placards appear regularly on social media, like a covert criticism of the regime and the State’s institutions.