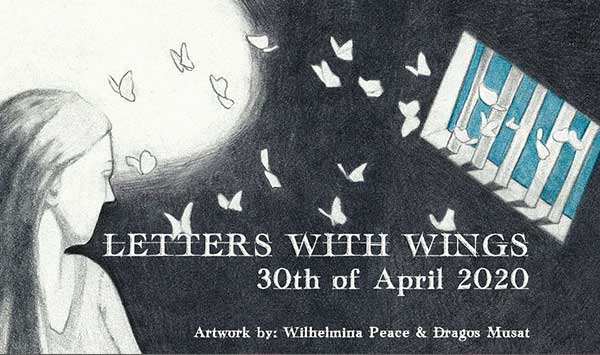 To let political prisoners know that they are not forgotten, a beautiful poetic initiative was born in Ireland…

This is how the appeal is presented…

“And so, her name at the top left-hand side of the envelop; under it, the address of her prison”

For Poetry Day Ireland, in a difficult moment where people all over the world are locked up at home because of the pandemic, we want to bond with artists and activists who are kept in prisons for their art or for practicing freedom of speech, or because they are fighting for human rights.

In such a world, where few are granted unconditional right of movement, while most are excluded from this privilege, or undergo immobilization – we want to invite everyone to write a poetic letter, or a poetic message of few lines, to be sent to artists and activists who are imprisoned by dictatorships at the moment.

We created a list of names to raise awareness about their lives but also to invite you to add to the list by addressing your letter or message to an artist or activist you have in mind.

We don’t wall in our imagination – on the list there are also artists who lost their lives while in prison. Still, we believe poetry will reach them because ‘Letters are winged now’ (Freda Laughton) wherever they are, where we are.

Take a picture of your lines and post it on the FB page ‘Letters with wings’. We will keep posting for 24 hours on Poetry Day Ireland (30th April) and collect messages from all over the world!

After poetry day we will try to reach these people in prison and send them our collected messages.