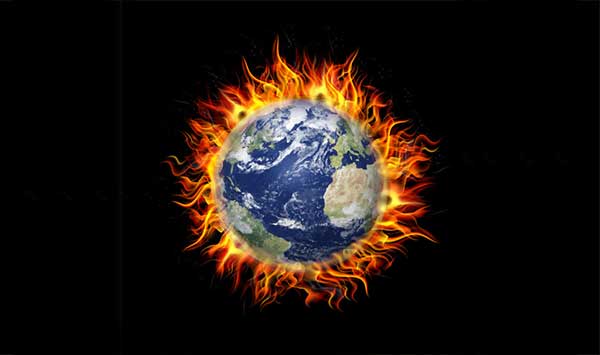 This measurable fever in a person infected by the coronavirus reminds me of another fever, and especially of the words that go with it – “the planet is burning”.

Indeed, more than 180 countries are burning with fever and the sacred worl Market economy is displaying a worrisome cough. Entire industrial sectors on hold or barely functioning, delayed shipments of merchandise, transportation by air reduced to essentials, increasing stockpiles of extracted raw materials…I would need entire paragraphs to describe the capitalist economy sector by sector, in order to detail what financial quarters are calling “the greatest catastrophy since 1929”. Briefly stated, a sanitary downsizing.

Has the World fallen apart for all that? Are we witnessing a global collapse?

Human societies are capable of resilience, and thousands of examples of this are apparent in over 150 countries. Even intensive proders in the food business, usually responsible for global overproduction and waste because of competition, are finding local or regional opportunities. Service industries demonstrate their non-essential character while others perform as collective goods. Mass tourism has stopped due to confinement in luxury hotels, or is becalmed on cruise ships at bay outside national waters…Here again, these are but a few obvious examples.

What my generation called the “consumer society” in 1968 and which is nothing other than its globalized capitalist organization appears even more grotesque on some screens when an ad for useless goods appears because it was programmed and paid for… before.

Under generalized confinement, any obvious routine comes under scrutiny.

Inversely, fear leads to overstocking and toilet paper becomes a commodity over which fights break out.

This sanitary crisis leads to the observation of a strong downturn in the great World Movement. It causes open concern when it involves the production of pharmaceutical molecules and other essential goods…To such an extent that the ministers of this economy, suddenly struck by fever, speak of “necessary sovereignties.”

But if I ran a title on temperature it was not in order to make further developments on capitalist organization, but to place the sanitary crisis in parallel with the climate crisis.

Why did the first – which will eventually produce less human victims than other past or current pandemics – why has it forced to its knees the happy globalization, and why are there no concerns over the predictions made by scientists that the world will be totally disorganized, human societies in shambles along with biodiversity and all of life itself before the end of the century.

From one Climate summit to another concerning, the answer is always the same “we can’t stop the system”. Alternatives should only be attempted at homeopathic levels so as not to destabilize the World…Green growth and green Markets, please remain undercover.

It might be amusing to repeat the speeches we have heard a bit everywhere since January concerning Covid 19 , from top to bottom of the political ladder, and replace the words, epidemic, coronavirus, fever, by climactic change. Issues concerning CO2 emissions would become cases of “a mild flu”.

The fact the appearance of new virus and their transmission to man via the biological chain has a direct and proven link with the profound changes and destructions wrought on biodiversity; this also can no longer be denied. Such negationism is also uncalled for when it comes to the consequences of capitalist predation on the growing planetary fever.

Future generations will have neither masks nor confinements to oppose to the catastrophy.

And yet we note that this barely occurs to the supporters of a “world after” which would consist of a reboot of the former world but, please note in… a better version!