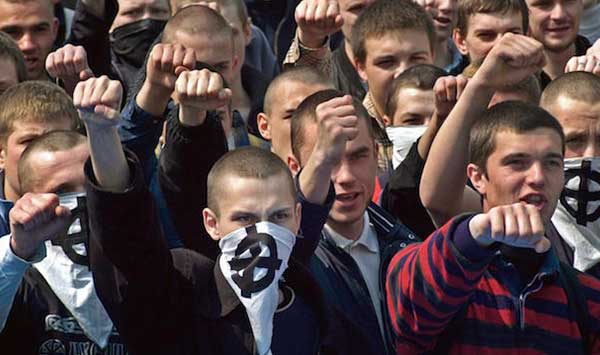 The hideous mask of xenophobia and identitarian nationalism is not made in China. It is home-grown.

Between the false controversy over “frontiers” concerning the spreading virus, the ever-present “great replacement theory” and Erdogan again pushing thousands of refugees toward the padlocked doors of Europe, there are a few common denominators: behind the masks, you find withdrawal and identitarian nationalism.

For the Turkish regime, battling against everything that is not its exclusive and bigotted identity, the millions of Syrian refugees on its soil or close to it are tolerated when they are useful as cannon fodder, as war proxies, as quasi-free labor in-country, or accepted as “investors”…But they remain “Syrians” just as Armenians, Greeks, Kurds, Roms, Alevis remain to be potentially designated as separatists or terrorists against the Nation-State.

And, in recent days, while Erdogan gets bogged down in a war in Syria and attempts to blackmail the EU who is looking elsewhere, Syrian refugees, these “other undesirables”, are weaponized in his end-game.

The nationalistic overflow that exploded when a “soldier of the nation” was killed in the zone of Idlib, gets turned against “the invading Syrian refugees”. Everything gets marked down as a benefit when it serves the regime’s policy as it attempts to gain favor from the European governments, both diplomatically and in cash.

Turkish authorities, the political parties (except the HDP), from ultra-nationalists to leaders of the Kemalist opposition encouraged Syrian refugees to leave while blocking new arrivals from the province of Hatay, chased out of Idlib by the war.

Photos and news stories showed the level of organization and the logistics put in place both to send the flow of thousands of refugees toward the Greek frontier, near Edirne, while defrauding them of their last remaining resources. The sea route was also re—opened, removing the exiled from the temporary shelters they had found.

To this purpose the ultra-nationalist “grey wolves” even generated manhunts in various places. They didn’t bother wearing masks to do it.

Other people hounded by war have been designated for the role of official human shields in the buffer zone demanded by the Turkish regime in its reconquest in Syria. This will also serve their purpose in the anti-Kurdish ethnic cleansing. For this policy of invasion, Erdogan continues to demand European funds and a discharge.

What are the first consequences of this instrumentalization of the refugees?

First of all, in Greece, the authorities make use of Erdogan’s blackmail to show themselves the good pupils of the European policy as pertains to the “management of migratory flows”, by violenty pushing back the forced migration. (One person died today under fire from the Greek military.) To this purpose, these same leaders let the nationalist Golden Dawn identitarians do the work of “pushing back into the sea” on the islands…This process which, until recently was a policy of the extreme right wing in Italy, comes with a request for extra funds from the EU.

We see all of the European extreme right wings grabbing the topic, thus validating the Turkish regime’s blackmail. The ideological transition is easy between controlling a virus and controlling invading migrants, in this period of fear of epidemics and the wearing of masks. The European continent has already lived through this assimilation of migrations with terrorism. The progression here is the same.

Behind the mask, fascism breathes its hatred and bides its time

Who will understand how the racist extreme right berates Turkey for racist reasons while borrowing its ultra-nationalism, expressed by the same Erdogan and supported by a hysterical domestic front.

Out of the seething cauldron of the Syrian war, demons are rising out of the remnants of all that was rotting in the region, under the crisis of the Nation-States.

And without looking very far, when an intellectual and writer such as Asli Erdogan wrote from prison in the beginning of December 2016 “Many signs indicate that the European liberal democracies can no longer feel secure while the fire spreads near them. The Turkish “democratic crisis”, underestimated or ignored for such a long time for practical reasons, this growing risk of Islamist and military dictatorship, will have serious consequences. No one can afford the luxury of ignoring the situation, and especially not we, journalists, writers, academics who owe our very existence to freedom of thought and expression…” she was only calling for the need to see the true nature of what lurks behind the masks.

One of the reasons for the existence of Kedistan magazine involves this will to endlessly explain that for several centuries – and let us only consider the previous one – Turkey and Mesopotamia have been involved in a strong political dialectic which deserves more and better attention than an Orientalist glance from world liberalism.

Finally, if I may allow myself a reading suggestion : La violence et ses masques – Notes préparatoires (In French)