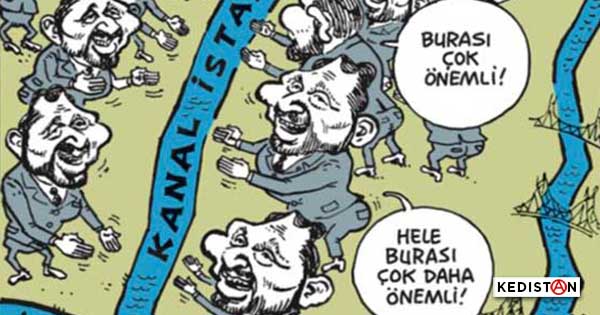 This January 20, the daily Cumhuriyet revealed under the heading “The son-in-law is a whizz at business” that Berat Albayrak, Minister of Treasury and Finance, and incidentally Erdoğan’s son-in-law, had acquired land on the itinerary of Canal Istanbul.

Following this, on February 13, a censorship decision landed. Access was forbidden to articles in several media relaying this information, including the cartoon from the satirical magazine LeMan. An inquest was also opened against journalist Hazal Ocak who revealed the acquisition by Berat Albayrak, charging her with “insulting a public employee”.

The article in Cumhuriyet provided information given by Berat Albayrak himself in 2013, on the purchase of the land along with another piece of land by his father Sadık Albayrak in 2003. These lots are in the Boyalık neighborhood of Arnavutköy Istanbul, which is to say in the constructible “housing zone” on the plans for “Yenişehir” (New Town), to be built all around… Canal Istanbul.

Berat Albayrak’s lawyer provided the following explanation on the topic: “Mister Albayrak’s father had bought a piece of land in this village in 2003. In 2012, the neighboring lot was put on sale. Mister Berat Albayrak bought it, as any citizen would who has the means to do so, in order to avoid that it fall in foreign hands. It would be hard to link this purchase with the Canal Istanbul project. This purchase has nothing to do with Canal Istanbul.” He also announced that legal means of redress would be sought. There followed on this declaration: censorship of the information, prohibition of access to a number of websites that had relayed it, and an inquest against the journalist…

As support, here is the cartoon that made the cover page of the January 22 2020 copy of the satirical magazine LeMan, with its translation:

His lawyer confirms the purchase by the son-in-law, Berat Albayrak: “When the lot was put on sale by its owner in 2012, it was bought by Mister Berat Albayrak, as any citizen with the means to do so would have done, to avoid it falling into foreign hands.” 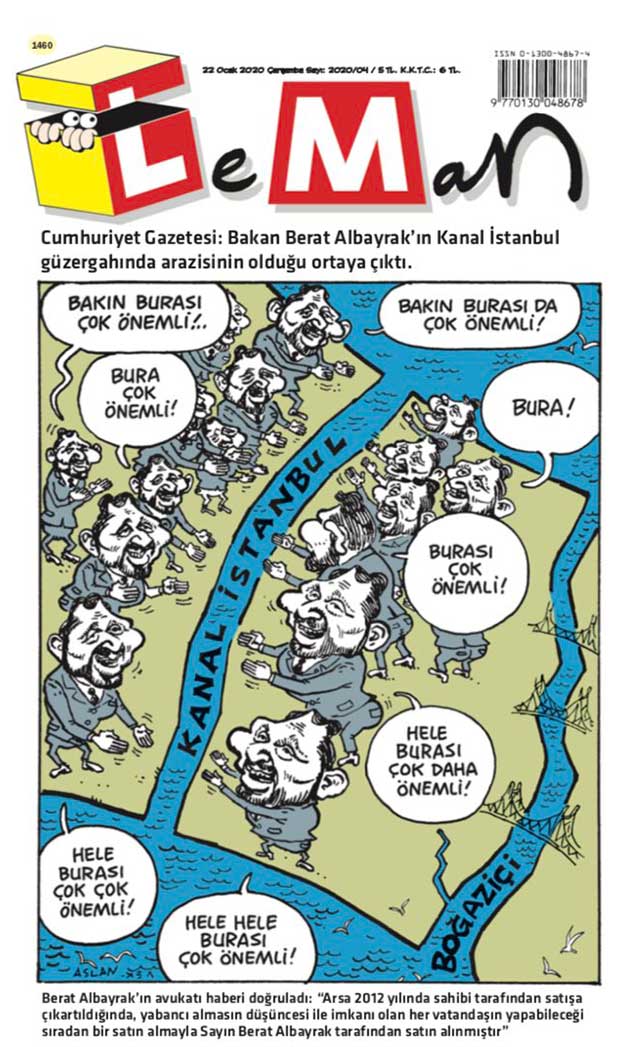