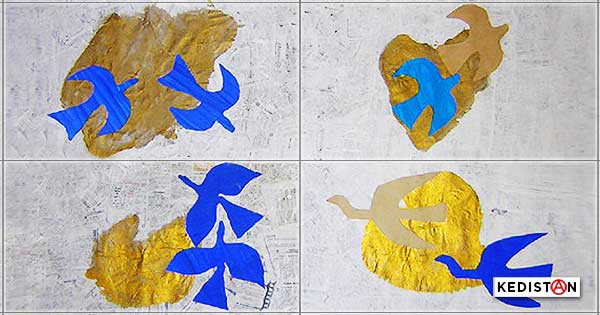 Yes, I know… when you do a search in French on the web wih a search engine, inevitably, you come across the following title: “I am less happy than I was in prison” (“je suis moins heureuse qu’en prison”). So, singing about the “birds of freedom”, calling on Braque to the rescue, is that painting beside the canvas for you?

I insist, Zehra, it will soon be a full year that you are free. Even if our reciprocal freedoms are all relative, as we both know.

I simply read a bit of your prison writings, looking over your shoulder as I transcribed them in French. Concerning freedom, you wrote:

…The other day, I went out to the hospital. I looked through the tiny window in the blue Ring (vehicle transporting prisoners). I looked at the people. They were rushing around. Life goes on. But, oddly, I did not feel nostalgic. I was even sorry for them and became even sadder. I told myself “these people aren’t aware of the fact they are prisoners.” The only difference was that inside the blue Ring, my hands were in handcuffs. I did not wish to be in the place of anyone walking along in the street at that moment. They also wore handcuffs around their wrists but they did not feel them. I felt funny. Moving slowly under the grey sky, through the frozen and stifling streets, through a crowd of people with frozen expressions and emptied skulls, at that very moment, I wished to get back to prison as quickly as possible…

There is no place in the world that is totally free. Can you state that where you are is really free?…

You even add on many occasions that the jail has become your workshop, so to speak and that your co-detainees as well as need have made you create, freely under the surveillance exercised by censorship, the prohibitions and the deprivation of materials. There indeed resides the singular story that calls out to those who wish to understand where the strength in your art comes from and how grey walls could display it. Your works are those years of life which they depict, spent in transforming days into beauty, while freedom was on a lowered mast…

But February 24 2019 saw the high walls dissolve for you, perhaps by recreating others less visible, as you stepped out of jail, carrying out in you as you said “half of my companions to the outside“.

And you have never forgotten the threads linking you to those who, in many cases, are still locked inside Turkey’s prisons. And the portraits of women on newspaper, which you so like, bring them to the attention of the public now in your exhibitions.

Those days are long gone when in February 2017 (yet another month of February) between two denials of freedom, between the jail in Mardin and that of Amed, you hung up your works in Diyarbakir. As if thumbing your nose at authorities, the exhibition was called 141, like the number of days without “freedom” you had just experienced and during which you had devoted yourself to resistance through Art. In 2015/16, you had lived through “siege conditions” in the part of Kurdistan located in the Eastern part of Turkey. That period during which, quite against your will, you learned to recognize the smell of blood led to your imprisonment for “terrorist propaganda”. It was shortly thereafter that the idea arose to have your works “escape” out of Turkey. 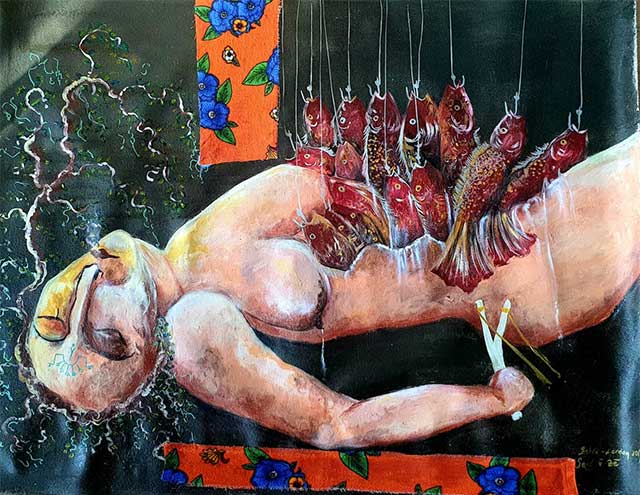 Would you say that they then became “free” to travel?
In your book again, when you write, filled with irony,

…As my workshop is under the stairs, so is my production…That’s exactly right. In any event, I am exploited! Because I am a woman, I am seen as cheap labor in the world of art. I am not even declared…Naz and Daniel are the ones who exploit me. In each of their letters, they says “work more, work more!”. They don’t provide me with paints or canvas…Work, work…all right, but until when? I want a raise!

If not, I will denounce you by declaring you are exploiting an undeclared worker! Hey, I will make your life a living hell, beware!…

In fact, you were making fun of those works that were “freely” exhibited all over and were telling in your place about your life, your struggles, your companions, your story and that of the Kurdish woman…

What has changed Zehra, admit it, is that for one year now, you have accompanied these works “free to travel” escaped from prison before you.

And you have even accepted that fifteen of them be kept in perpetuity between the four walls of French national Museums, in order to tell their story, your singular story.1In 2019, the Museum of Mediterranean and European Civilisations acquired 15 of Zehra Doğan’s works.

For the past year, you have exhibited as so many contemporary artists would like to do, from one museum to another, from one Art Center to another, on two continents. And your words are free there, same as your Art. This whole year allowed you to show, and explain, as few activists could have done even with the best of good will, and beyond friendship, I can say that you never cheated, out of love for art.

So, what freedom are you still lacking?

That of continuing to create free of constraints, no doubt. And you know that the constraints now come from yourself also. In prison, you had partially destroyed some of the absence of inner freedom, in order to dissolve the walls. You wrote in your letters that this was where your strength came from. And now, alone, with no other walls but those on which to create, you question the right to create in freedom.

And when you do, it produces searing intensities, continuities, returns, a “signature” so recognizable…For you are now free to dip into the well of those past years, not in order to copy them ad infinitum but to drink from them without having to render accounts.

One year of the freedom you lived as conditional ends in February 2020. Make room now for your nomadic Art.

New works, new bedazzlements. A word to collectors, Zehra’s works are on sale!

In order to live free, love and cool water are not enough.