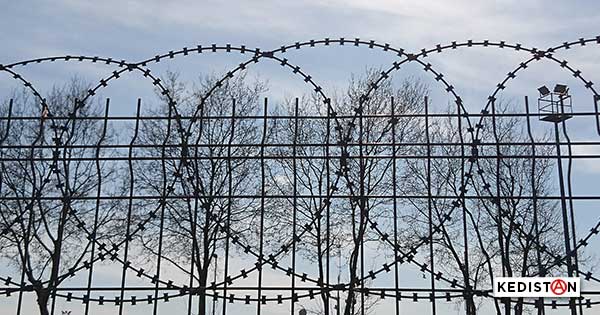 On May 29 2017, we published a call to solidarity revealing the situation of Devrim Ayık, a young prisoner suffering from a chronic and severe case of “Crohn’s disease.”

Devrim was then incarcerated in Izmir prison. His incarceration was maintained despite the medical reports. In June he was subjected to a forced deportation to the prison in Antalya, 460 km away from his family. In the difficult conditions of the penitentiary, his health rapidly deteriorated. A petition had gathered numerous signatures, his case was defended by human rights associations and, thanks to the solidarity and the considerable efforts of his family, close ones and associations he was transferred to an assignation to residence. But not without difficulty!

At the hearing on May 5 2018, the tribunal had ruled that Devrim Ayık could leave the prison and be assigned to residence. But, before he had even left the prison in Antalya, at the door of the establishment, he was placed in custody for another inquest into his “participation in an unauthorized demonstration” and “propaganda for an illegal organization.” He had not shown up for his statement…and with good reason, since he was detained… Following his interrogation and a hearing by the judge, Devrim was finally assigned to residence.

But on October 7 2019, Devrim Ayık was arrested once again as he was leaving the gastro-enterology service of the hospital in Antalya’s Akdeniz University, where he had gone for exams. Following 4 more days of custody, he was sent back to Antalya prison, the same one he had left 4 months earlier for his assignation to residence.

Crohn’s disease from which Devrim suffers since 2012 is a relatively rare inflammation of the digestive system for which there exists no known definitive treatment. However, the patient’s life can be relatively improved with the right follow-up and treatment. Devrim has already been operated on twice and has already had close to one meter of intestines removed. As for appropriate medical follow-up and treatment, this is impossible under prison conditions. Most of all, Devrim does not have access to the specific foods prescribed by the medical dietician. The greatest risk in Crohn’s disease is an evolution toward colorectal cancer.

His mother has sent us a letter in which she explains Devrim’s state of ill health and calls for help through international solidarity.

“My son being in jail, he is not being treated. The fact he cannot feed himself as prescribed by the dietician means he cannot be treated as needed and under the unhealthy and insufficient conditions in jail, Devrim’s condition worsens day after day. As sole treatment to delay the transformation of the illness into cancer, he receives two injections of Humira per week.

On January 17 2020, we learned that Devrim suffered a malaise. He was transferred to emergencies at the insistence of his co-detainees. But following a single intervention, he was returned to his quarters in prison.

For a long time already, my son has been unable to leave his bed. He needs help from his friends to attend to all his hygienic needs. On his last visit with his lawyers on January 19 January, he was brought in a wheelchair by the guards.

His present condition is of grave concern. For the past two weeks, he has suffered from nosebleeds and has coughed up blood. Since he does not receive the proper food and is not treated, he experiences bleeding, irritations and oedema following bowel movements. He suffers from throat inflammations and a heavy cough. He has started experiencing heart problems. His anemia is so pronounced that his hands and face are colorless. Normally, he should receive blood transfusions, but the prison directorate has forbidden them. He is starting to experience intense intestinal pains. Moreover he is experiencing a hearing loss. As for his eyesight, he has totally lost vision in his right eye, and with a myopia of -30 , he needs corrective glasses in order to see to a distance of 1 meter. The medical commission has declared Devrim 76% handicapped.

Despite all this, Devrim has received no responses to the requests he has sent to the proper authorities, be it the Ministry of Justice or the office of the prison prosecutor or other institutions.

My son Devrim Ayık’s situation has reached a critical stage imperiling his survival. I appeal to every institution, civilian organization, the Turkish Union of Medical Doctors, to be sensitive to his case.

There must not be yet another dead body removed from prison. Preventing this is a human duty. I call upon all of humanity that we may say together “freedom for the sick prisoners, freedom for Devrim Ayık.”

We invite you to share this appeal on your networks. The first appeal had led to an arrangement because the case of Devrim Ayık, a symbol of many others in Turkish prisons, had been widely covered outside prison walls.

Do not hesitate in signing, sharing, distributing this petition, in Turkish no doubt, but which reproduces the words of the appeal made by Devrim’s mother.

Devrim Ayık is released, under house and judicial supervision.
A Case law decision for sick prisoners in Turkey.