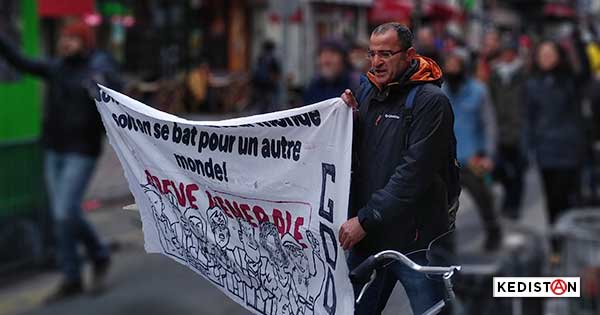 Mehmet Sarar, a political refugee was taken into custody following a border control on the franco-german frontier. The “policing cooperation” agreements between Turkey and European States of which Turkey makes an abusive use in order to track down its opponents lead to this grotesque situation. It is not the first time.

We demand the immediate release from prison of our friend, colleague and comrade Mehmet Sarar, currently imprisoned in Germany.

On December 26th, after chanting slogans side by side against the pension reform in front of Paris’s “Gare de l’Est”, we bid goodbye to our comrade Mehmet, who was taking a train to spend few days of holidays in Switzerland.

During an identity control on the French-German borders, the cops have arrested Mehmet and then sent him to a prison in the town of Freiburg, invoking an international arrest order and an extradition demand by Turkey. However, the fact that Turkey uses Interpol to track down political opponents is a well-known secret. Thus, when the German state imprisoned Mehmet, who has a resident card in France, they were not only collaborating with the Turkish government, but also violating the international treaties which they signed, and more specifically those guaranteeing the rights of refugees and the freedom of movement.

Indeed, Mehmet Sarar was granted political refugee status in 2011 because of the persecution he suffered in Turkey for the ideas he defended.

Mehmet spent ten years of his life in Turkish prisons where he participated in a hunger strike of more than 300 days and at the end of which he suffered from Wernicke Korsakoff syndrome. Since settling in France, he has continued to work tirelessly within the working class, of which he is a proud member. A construction worker, he went out on the streets, yesterday with the Yellow Wests, and today against the pension reform. He is a member of the Solidarity Committee – GDDK, he worked particularly in the organization of immigrants in the Paris region.

We demand the immediate release of Mehmet Sarar from prison and his return to France among us as soon as possible!

We ask everyone who joins our call to relay the information and to demand an end to his imprisonment in Germany.