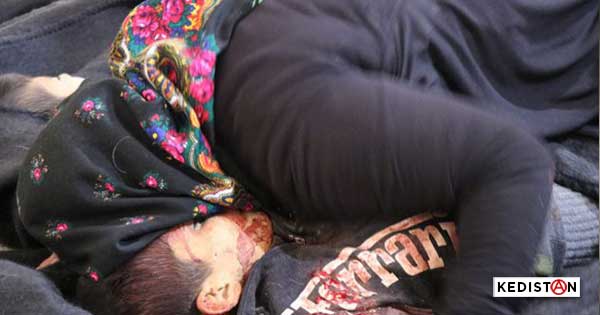 Erdoğan headed to NATO in order to talk about eliminating terrorists in English translation. He could thus give direct evidence of his efficiency in the matter, since a tally reports the wounded and at least 11 dead, including 8 children, in the town of Tal Rifaat he ordered bombed by his artillery.

Most of the victims are displaced Kurds that had settled in Tal Rifaat since the invasion of Afrin in 2018 by Turkish armed forces and their bearded allies…What were they still doing there, on OUR lands, as those afflicted with Ottomani nostalgia like to say here.

As things stand in Tal Rifaat, we do not know who of the regime’s army, of the Russians, of Turkey or of the “free Syrians” will proceed to the final killings against the Kurdish refugees. There was an agreement with the Russians, asking our brave fighters not to bomb the town, but Erdogan probably thought that arriving at NATO with eight kid terrorists would give him some standing, allowing him to gauge the hypocrisy of the gathered NATOnians.

And although no one declared undying love for him, he did return with a word from Trump saying that “the projected security zone” was well underway. A few more clean-ups and the Syrian refugees will be under good protection.

Killing kids? Big deal. It’s a specialty in the region.

A specialty of the Syrian regime, since way back, against civilians and, occasionally, by using gas. It was also a specialty of Turkey’s new friends, defectors from ISIS or one of its variants. They demonstrated their talents against the Yazidi.

There is also a certain seniority in the matter as pertains to different regimes in Turkey. I won’t go back a full century, with the Armenians, that’s just too easy.

No, just in the past 25 years, while our little Mehmets were busy cleaning up villages in the East and the police invented charging the Kurdish PKK with the massacres of babies. All of this has been proven since, as some felt the need, before dying, to unburden their conscience of these crimes committed in the name of Mustafa’s holy fatherland.

And in Roboski, there weren’t only donkeys either… And little Ceylan, she was also a terrorist?

Over decades, the violence has penetrated into Turkish society and from Mehmet the soldier on to Mehmet the bearded soldier, it has rotted consciences to the marrow. To the point where people applaud the news of the killing of 8 children, because it is presented as anti-terrorist reprisals.

And the bunch of Kemalist jokers in Parliament don’t say a word either. At most, as for Roboski, one of them will talk of regrettable collateral damage in the war against terrorism.

So that after various skirmishes among the world leaders in London, all these fine people published a final press resease saying that the target must that of all terrorisms. We don’t know what they told one another about the “insecurity zone” for the refugees in Syria.

For the kids, do you stick on the label before or after their death?