Turkey • God is dead, the ways of the ballot box are unfathomable 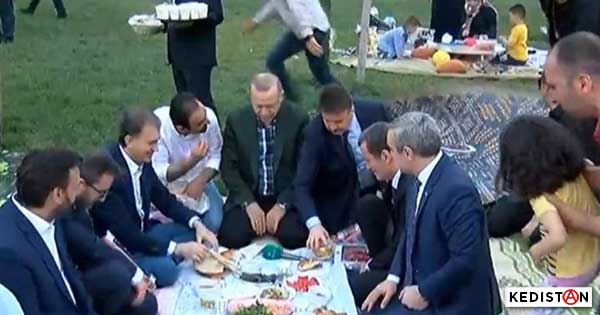 In Turkey last May 27th, the so-called “media” Yeni Şafak pub­lished a video of the Reis with this head­line: “The Pres­i­dent of the Repub­lic, Recep Tayyip Erdoğan, broke his fast at the invi­ta­tion of a fam­i­ly sit­ting in the prairie on the shores of Zeytinburnu”…

Giv­ing vis­i­bil­i­ty to that pro­ga­pan­da rag  makes me want to puke, but it’s for a good cause. But it’s tough…

Of course, Turk­ish social net­works went into a key­board fren­zy at the end of the table…

I found more than 2 000 twit­ter com­ments includ­ing, with a few minor excep­tions, all the words on the tip of my tongue…

Look at this and your imag­i­na­tion will also take flight…Democratic Turkey is the one pay­ing for the banquet.

Oth­er com­ments then land­ed in an avalanche:

“They haven’t fin­ished set­ting the stage, they’re try­ing to hide the women and chil­dren in the corners.”

Humor­ous­ly, Jalal added: “The con­ver­sa­tions in the back­ground are real­ly screwy. Some­one is ask­ing “who’s the fam­i­ly?” They’re paid like don­keys but effi­cien­cy isn’t their business.”

“Oh, the poor aunt, they force her away but she settles in by herself.”

“Once the protocol is in place, there’s no room for the family who is inviting.”

“They bring the food on purpose. Even the bread is wrapped.”

“Grass and cakes. After eating, they will roll around in it too. All the pleasures of Ramadan in Turkey.”

“I get the feeling they ate the family first.”

“The family’s being dowloaded, but by bit.”

“The local in Zeytinbumu are very select people, they were their business suits even on a picnic.”

“Great family! I wonder if those advisors aren’t working to finish them off. Never saw such lousy PR work.”

“10 hours prior to the meal, security agents were at work selecting a family in the park.”

“A family of males in suits. In any event, in Zeytinburnu, we always break the fast out on the grass with the family, always in suit and tie, and we always leave the women at home.”

“Gay couple, married in Holland, gave birth to boys only. This is a family. Enough gossiping please.”

“They must have told themselves: since we’re eating the people’s share, let’s do it differently.”

“I have nothing to add to the comments above. All of it is lousy: the scenario, the actors, the scene, the walk-ons…”

“I really liked the indifference of the family in the background.”

“I feel really sorry for the people who believe in all this. In religion, there’s no need for a demonstration.”

“OK,OK, go on now, we believe you. Stop making us suffer and torturing us.”

“It would be a lot better if they broke the fast on Mars. Our Martians brothers would be happy.”

“Once again, the mikes stayed on. I didn’t enjoy this production.”

“To give this the air of a Bob Ross portrait, should they have added a few faces of happy children?”

“They’re so used to stuffing their faces, the family is out.”

“A leader so close to the people! Maybe the people will join him for a moment…”

“Ah, ahhh! If they didn’t exist, who would make us laugh in Turkey?”

“Let’s all go out on a family picnic too, wearing our business suits. My Pacha of a grandfather will wear his medals, start the barbecue and play cricket.”

“Oh, you didn’t know this was a set for the filming of a series. In fact, our President had already played a role in a couple of small murders.”

“If the elections go on a bit longer, they’ll finish breaking the fast six feet under.”

All right, enough with the comments.

But that’s not all. I also offer you this video from June 1st, still in Turkey…Yes, there’s a pop­u­lar event every day. Espe­cial­ly before an elec­tion where Istan­bul is still in dispute.

This time, Bilal, the beloved prodi­gy of a son, is play­ing after break­ing the fast, under the proud gazes of dad­dy and mom­my. Even if the body­guard behind hand­some Bilal stays on the look­out, arms extend­ed and benev­o­lent hands ready to grab his boss should he fall on his ass. But the game ends with­out inci­dent. For the sake of jus­tice, the score is announced: “Even!” under the applause of the “peo­ple” and of the grat­i­fied parents.

To con­clude, meet me after the video…

God is dead. The ways of the bal­lot box are unfathomable…

All right, I’ll end my fes­ti­val of fast breaks here. My own fast is dic­tat­ed by the prices, and the break in Turkey has been con­sum­mat­ed for a long time already. Once they leave, we will eat the grass they left us.