Turkey • Release of 100 members of Hizbullah 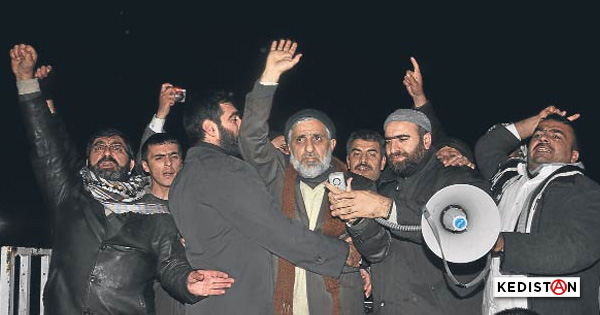 Some one hundred prisoners, members of the Islamist organization “Hizbullah” who were under heavy sentences including perpetuity, have just been released in Turkey.

Hizbullah in Turkish. The Turkish Hezbollah has not direct link with the Lebanese Shiite Hezbollah,  even though it is also a Sunni Islamist organization. Hizbullah is on the list of terrorist organizations both in the United States and in Turkey.  It was at the origin of the bloody Sunni Islamist movement, with a majority component of ultra-radical attacks against Kurds.

Their last attacks in 2003 consisted of suicide bombings of  two Istanbul synagogues followed, five days later, by an attack against the HSBC bank and the British consulate. These attacks claimed a total of 62 lives.

In pursuit of the the establishment through violence of a State based on the Charia law, Hizbullah first appeared in Turkey in the eighties. Initiated by Adnan Ersöz, led by Hüseyin Velioğlu, the organization was virulent for years in Turkey, in Kurdish regions as well as in big cities, and proved particularly vicious against the Kurdish liberation movement in Amed.

By 1990, the organization that had started by extorting money from the population had become a threat to the Kurdish movement which was then on the ascendant. Many activists, sympathizers, journalists, businessmen but also ordinary Kurdish citizens including women in short skirts or people who drank alcohol were savagely murdered in the streets or kidnapped and tortured before being killed.

The organization was made up of several groups. The two best known, Ilim and Manzil, had established links with Iran. They benefited from financial and logistical help in this way, in exchange for information on Iranian dissident refugees in Turkey, or on Turkish military positions in the border area.

At the same time, because of  their common hostility aimed at the Kurdish struggle and their status as an armed organization against revolutionaries, the Hizbullah also benefited of unofficial support from successive Turkish governments representing various political tendencies. For example, Fikri Saglar, a deputy of the Popular Social Democratic Party (SHP), former minister for Culture, stated during an interview that the army not only made use of the Hizbullah but also contributed to its founding and gave it financial support.1The Human Rights WatchApparently, these connections continue under legal cover… Under Hüda-Par, the Party for the Free Cause, Hizbullah moved out of clandestinity into legal representation. Founded at the end of 2012,  the Hüda-Par supports AKP candidates in the June 24 election.

Yet, starting in the second half of the nineties, successive Turkish governments had engaged in repression against Hizbullah. Turkish authorities, attempting a rapprochement   with the European Union, wanted to maintain a distance with integrism and to open a dialogue with the Kurds.  This providing the explanation for that: Hizbullah leader Hüseyin Velioğlu was killed near Istanbul, in Beykoz, on January 17 2000 during a live televised police operation that lasted four and a half hours.

According to estimates done in 2003 by some journalists and the Center for Defense Information (CDI), the organization numbers some twenty thousand activitis. The report titled “Patterns of Global Terrorism” published in 2002 by the Federation of American Scientists (FAS) gave an estimate of a few hundred armed members and of thousands of sympathizers.

Hundreds of suspected members have been brought to court. Some members have declared they were  subjected to torture and ill treatment themselves. Their testimony was documented under the category “Action Alert” by Amnesty International. “The Hizbullah Trial” ended in 2009.  The accused were sentenced to various prison terms, including sixteen sentences to perpetuity.

On January 4 2011, 24 detainees, including top leaders of Hizbullah, were released under probation following Penal Code revisions limiting the duration of incarceration to ten years. These individuals, the brains of the organization, disappeared into thin air the moment they were released.

On May 21, Gökçer Tahincioğlu of T24 published an article announcing that, 8 years later, another hundred members of Hizbullah had just been released. The totality of individuals considered as exercising responsibilities within the organization, and sentenced to heavy prison terms, are now free. And this latest hundred or so have probably followed the same route as the preceding ones, and disappeared without a trace…

This is the result of  a sequence of judiciary decisions and of the arbitrary application of rulings and case law… Abdullah Altun, a prisoner sentenced to perpetuity, called on the European Tribunal of Human Rights. The Tribunal ruled that the court responsible for  Altun’s case had not provided an independent judgment  and that he must be tried again. Following the request submitted in Abdullah Altun’s case, the Turkish Constitutional Tribunal rendered a decision on July 17 2018: “the presence of military judges among the body of judges constitutes a motive  for a new trial.”This decisive ruling allows for the release of detainees sentenced to heavy prison terms.

Justice: it depends on the customer

Following this decision by the Constitutional Tribunal, many political prisoners  to which the same conditions applied submitted their requests. The totality of those involving prisoners sentenced for “belonging to the PKK” were denied. Visibly, the decision of the Constitutional Tribunal is only valid for the members of the Islamist organization, despite the fact they were sentenced for “attempting to overthrow the constitutional order through armed action, assassinations and attacks.”

Moreover, the Tribunal in Van did not stop at the decision by the Constitutional Tribunal and, under the pretence of dismissals for belonging to the organization of Fetullah Gülen, better known as FETÖ, the judges that had previously sentenced Hizbullah members decided a new trial was called for, opening the road to their release.

Here again, the application of the law is arbitrary… A number of trials initiated by judges and prosecutors affiliated to FETÖ – and who were later put on trial themselves – continue without raising any qualms in their colleagues employed by Erdogan. The case of the Ankara trial of 19 academics who were signatories of the 2015 Peace Appeal is but one example among others, and serves as a good illustration of what constitutes Justice in today’s Turkey…

In many ways, these releases  are to the advantage of the Erdogan regime.

What is more, it allows a pretence of a denial, at a time when the EU points a finger at the anti-democratic manipulations of the electoral code, over Istanbul, precisely, and while international commentators on Turkey, multiply descriptions of the country as “anti democratic” or “a democraship”. Beset by economic problems, Erdoğan must reassure a world-wide and European liberal wing, by maintaining the myth of respecting a democratic institutional façade.  He may even concede a few crumbs to the Kurdish movement, as would seem to indicate the recent relaxing of conditions imposed for visits to Öcalan…

During the reshaping brought on by the European elections, an anti-Turkish pressure, from the left as well as from the right, could unobtrusively deprive him of substantial aids, both diplomatically and in hard cash. Erdoğan has not forgotten that playing the liberal EU card helped him in his rise to power. Throwing it away would be both a political and a financial mistake, at a time when the blackmail over migrants has lost some of its usefulness, and his “Ottoman” project for the Middle East is in a bad way.