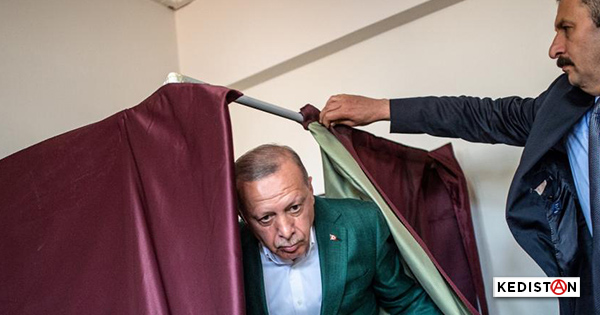 Turkey – Following the results of the local elections, the same differences in approach as usual show up in the media commentaries and analyses.

Depending on whether one empties the concept of democracy of all content in order to reduce it to the existence, or absence of elections in the European manner, or whether one refuses to do an in-depth analysis of Turkish nationalsm (triumphant Turcity) and its consequences on the substantial minorities in Turkey, whether one belongs to Erdoğan’s political inner circle, or whether one stands by the side of those subjected to military or stealthy repression by the State – in summary, the points of view are different, of course.

This is obvious, you will tell me but, if so, in the case of press articles, it might be a better idea to clearly state the color and the nature of the balcony from which one expounds, and not to take refuge behind a false ‘journalistic objectivity”, with the excuse that one is a correspondent for a major news outlet in Turkey.

While understanding perfectly the permanent threats, whether direct or indirect, bearing down on press correspondents in situ, threats inciting them to permanent self-censorship, this cannot serve as alibi for political alignments akin to blindness in front of self-evident realities of Turkish society and its past and recent history, especially if one is a long-term resident in the country.

The kedi had once summarized this as “the assiduous attendance of certain lay terraces in Istanbul“, preferably elevated ones, that colored the information coming out of Turkey

In short, after this detour I considered necessary, after reading and listening to the news for the past few days, I return to the results and the commentaries. And I announce my colors, with no mental reservations or censorship and without playing the Karagöz.

In themselves, despite the cheating and  the usual recurrent manipulations against the opposition, the results serve as a life-sized survey that reflects the state of the political and social forces in Turkey.  One need not belong to the camp of “election fetichists” in order to consider that they sometimes express a raw portrait of reality.

A single round, a fairly massive turnout (even if the obligation to vote hasn’t been sanctioned in a long time), manipulations that were a bit more restrained than usual, reinforce the fact that this consultation can serve as a basis for analysis, especially since the stakes were heavily guided by “anything but Erdoğan” on one side, and “Erdoğan is the Nation” on the other.

The regime’s warmest supporters insist of course on the global result at 52% and minorize the electoral upsets in Ankara and Istanbul as signs of democratic vitality. They do not answer when questioned about the Prime Minister’s hasty declarations after he was beaten in Istabul and the quick removal of the “thank you” ads the AKP had placarded for the voters’ intention.

Despite even marginal electoral manipulations, this 52% is far from representing a progression, given the novelty of authorized alliances, introduced in the presidential constitution. The percentage is higher for the AKP/MHP coalition in those districts and provinces where such alliances did not exist. And it shows a progression in favor of the ultra-nationalist MHP, even if this does not translate into local power grabs. The low-water mark of the Presidential election remains more or less the same, with a nationalist dimension showing a progression.

This same nationalist dimension is also seen in the opposition coalition made up of CHP/IYI which conquered Istanbul and Ankara, among others, and consolidated traditional strongholds such as Izmir. The IYI Party, which has nothing progressive, serves more as a reinforcer of the “anything except Erdoğan” movement.

Following Sunday’s results, two things are to be feared at the institutional level. The first is hidden in Erdoğan’s reforms. These allow the State greater control over the budgetary choices of local governments. One can easily guess that Erdoğan’s sentence on the theme “I wish them a lot of fun” concerns upcoming power plays. The second was clearly stated before Sunday and has already demonstrated its harmfulness.  The replacement of elected members by State-designated administrators has already deprived a large number of people of their elected representatives in areas with a Kurdish majority, and this could be the case once again. Especially since one can easily imagine that the national opposition coalition will not feel concerned by what will be presented as the “fight against separatism’. As of today, challenges and requests for recounts have been filed in all the localities where the HDP won, an indicator of what is to come. Should this happen, it would seriously undermine the “democratic vitality”.

Let’s talk about this so-called “democratic vitality”. If, as expressed by a few sensible observers, it is a matter of underlining the fact that, beneath the lid imposed by the regime in Turkish, embers still exist, ready to raise a flame again, I agree. Indeed, the results show that the people are there and chose to vote. And this is a positive observation – here percentages lose all meaning – especially the strong expression in areas with a Kurdish majority, despite the past five years of exactions, murders, oppression, imprisonments and political confiscations.

The HDP’s electoral strategy of concentrating on districts, provinces and communes where winning was a possibility or those that had to be defended, has indeed paid off. It reinforces the notion of democratic vitality, even if I prefer to call it “the maintenance of the struggle for democratic autonomy”.

It has a direct impact in Istanbul and Ankara’s results for the CHP/IYI coalition, bringing to it the votes of those who, in their way, wanted to give a political expression to “anything except Erdoğan”. The HDP has not hidden the fact it wanted to provoke some “reversals in the West” for the AKP.

And true enough, those political reversals, once put into perspective, bring some fresh colors to the winter landscape. But they do not erase the reality of power, nor the majority nationalist axis, shared by the official opposition and the regime’s supporters.

To consider this  as authorizing the CHP to  claim the renewal of its political virginity on the future of Turkey, thanks to the miracle of the urns…This  is the party that fell from power because of past corruptions, republican militarism supported by contempt of the Analolian people by the ruling classes, this is the Party welded to negationism, the successor to the organized massacres against the Kurds in the eighties and nineties. And it would now have become the quasi-Left in Turkey?

I may be accused of simplifying and being a bit quick on the draw. I agree. The roots to the Turkish problem are more complicated, they need more nuances and more time spent in analysis. But those who would aim those cricisms at me are the same ones who, for decades, have conveyed the idea of Turkey as a “beautiful lay Muslim democracy” that was corrupted by an nasty ignorant Ottoman. This is the notion that serves as a G-string for all European compromises.

And since one must conclude, we might as well do so on a less acid note, even if there is no room for claiming victory.

The Kurdish movement is pragmatic. It considers, and it is right, that these reversals of Erdoğan will be significant, one way or another.  It considrs that on the so-called international scene, and thus in Syria, this could play a role and its members congratulate themselves on their electoral strategy. Political reversals may indeed have a domino effect. But the basic trends remain, and no further elections are expected in the near future, while the regime holds all the keys, despite the economic crisis. The great revelations of corruption we can probably expect from the CHP’s taking of some AKP strongholds, will not suffice to create new perspectives.

Thus, this is not the time to sing hymns to the return of democracy in Turkey, except to say that a part of the population thirsts for it, and has said so.